I’m laying here in my bag on the evening of the 24th. I am wet and cold. There is a winter storm advisory in place and we can tell them first hand that it is accurate! 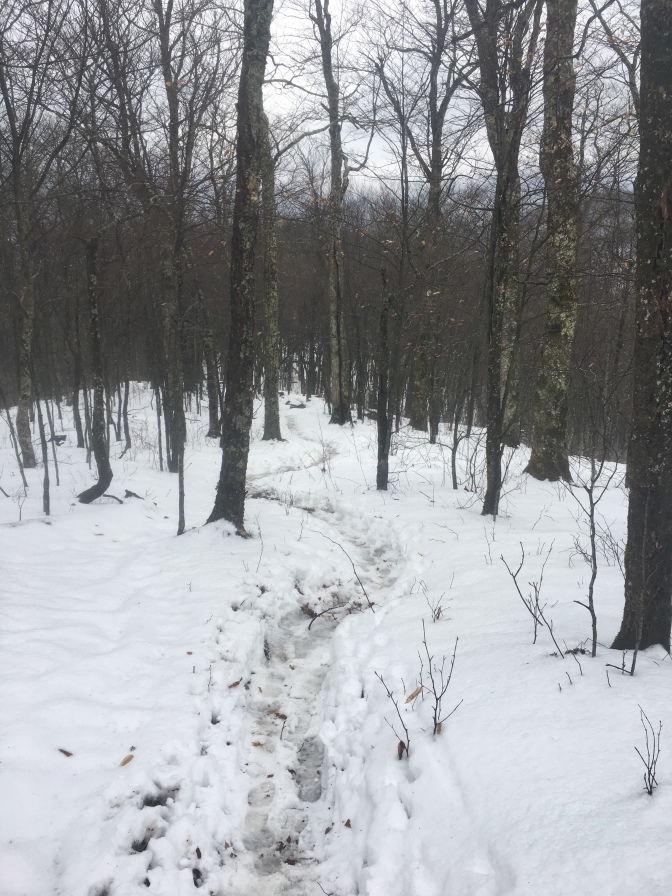 Last night was a symphony of snoring. In spite of that I managed to sleep. The rain began after I finished writing last night. It was all night and steady. When morning came no one moved. Several were going to quit and others had opted to zero in Gatlinburg. Our little group has opted to stay on the trail until the end of the Smokies. I say our little group…. they out hike me daily and have now found anther girl who hikes their pace and has lost those she was hiking with.

I moved out by myself in the worst possible conditions. Gaiters were in place as were my Yax Trac. It was a mix of sleet and rain with a wind that would blow you off of the trail. I was in for 13 miles of this and that included going up and over Clingmans Dome. There was no doubt about it…. we would see nothing of the dome. The highest point on the trail was a fog.

I attempted to get into a groove but is was impossible. It was so absolutely miserable. Any of you that had considered doing a bit of the trail with me consider yourself lucky that you did not choose to do so. If this was wrestling you’d see a pile of people tapping out.

The trail all day today was slush which was over your boots. If it was a hot summer day it was the kind of slush that you buy and add your favorite flavor to cool yourself. Not so here. I’m wearing double Hefty trash bags on both feet in an attempt to keep my feet dry. Somehow that worked.

When the rain hit again I was drenched through and through. My gloves and pants were super saturated. I fell twice into the water on the trail soaking myself. I attempted to say no bad words because I had just finished saying a prayer for help getting through this. It was a challenge. Was I being tested?

It was impossible to know which peak was Clingmans simply because you could not see more than 100feet in front of you. The last four miles were the worst four miles that I have hiked. That is saying a lot because I have hiked some terrible miles.

Finally I arrived at the shelter and found that everyone was as soaked as me. Clothes were hanging everywhere in at attempt to have something dry to wear. Forecast? Rain. As I type thunder and lightning crash around us. A sign of summertime. This is very confusing!

Maybe if I fall asleep I’ll wakeup and everything will we fine. Then I could hike on warm , dry, fat and sassy .