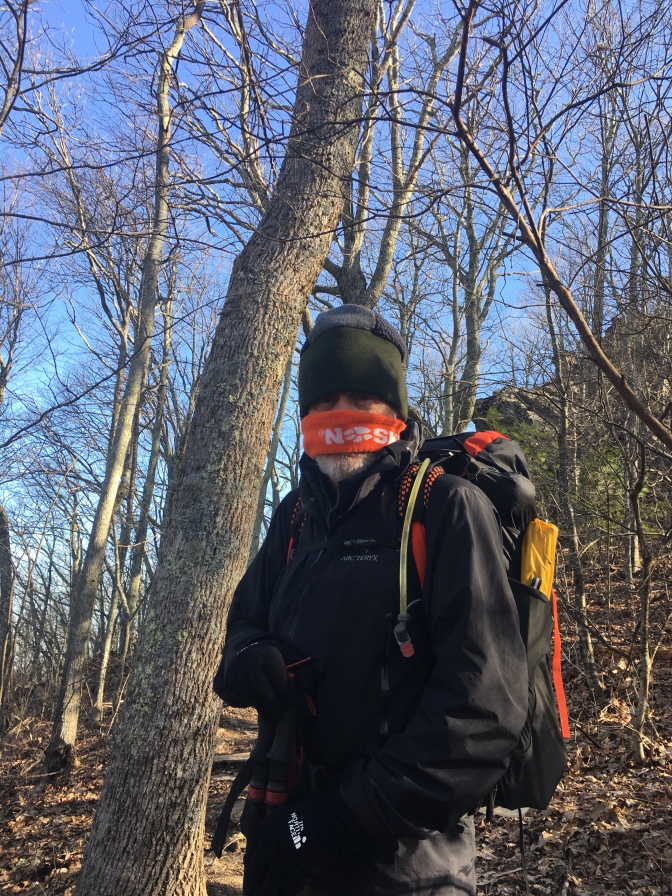 Thank Goodness we are Out of the Smokies and it’s much Warmer.

I believe that Clemson University can be thanked for the continued existence of my nose. I’ve lost track of the number of times that I was relatively certain that it had frozen off. What was intended as a headband has migrated South alternately protecting my nose or my neck. It doesn’t matter if it’s upside down or not it’s a matter of 1…2…3…4…1…2…3…4…C…L…E…M…S…O…N… I wonder how the baseball team is doing. I’m missing a lot of baseball…. and heat… and my couch.

On this day it was especially important. Joe and I awoke to freezing temperatures and the need to hike to gain warmth was high on our list. I left my dirty water bag hanging in a tree with water for breakfast. It was frozen solid. It would be a dirt bar morning.

The Conquest of High Rocks

It didn’t take long to get warmed up. We immediately had to climb 350 feet to the summit of High Rocks. That, of course, involved traversing another series of rocky footing and the use of my sticks. Once past that we walked through Spivey Gap, over Ogelsby Branch, and Devils Creek Gap. The hike today generally was downhill as we were descending to The Nolichucky River and a Hostel.

The Terrain Near Erwin, Tennessee

It was a good day of hiking for us. We had a bit over 13 miles to go. The promise of perhaps a Hostel bunk was appealing. It included a shuttle ride into Erwin for dinner, a laundry and a shower. Good times were ahead.

Quiet hiking brings quiet thoughts. Sometimes those thoughts involve food we miss. For example I’ve craved Twizzlers. I’ve craved ice cream. Today I craved a donut and here one was. What luck! I stood looking at this after taking the picture before shaking myself out of the trance knowing that somewhere in Erwin there had to be donut. We hiked on.

Who Needs Steak When You’ve Got SPAM!!

Hiking 13 + Miles guarantees the need to stop for lunch along the way at a convenient log or perhaps comfortable rock. Nothing but the best at the finest establishments. All are A rated. Since you haven’t washed your hands in several days another one won’t matter. The trick is to avoid eating your package of SPAM too quickly. You’ve got to make it last. After all…. when it’s gone the only thing left to do is to get up and walk.

A few miles later we could hear off in the distance a new sound. A steady sound that increased at times and then disappeared. It did not take long to realize that we were approaching the Nolichucky River which runs through Erwin, Tennessee. We were about to arrive at one of the major landmarks of the AT. It would all be downhill from here. We began to see day hikers coming up from the valley below. 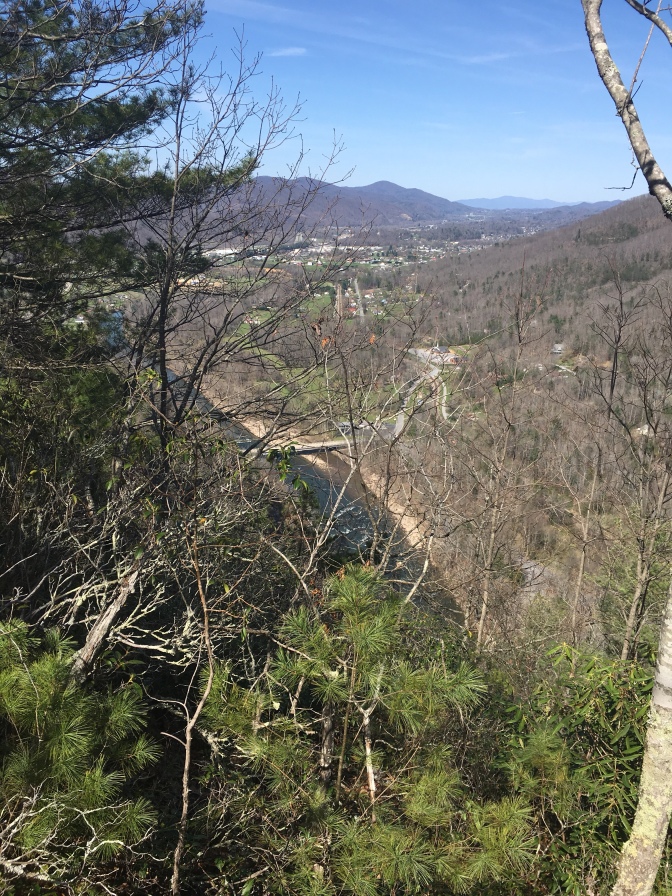 A few more switchbacks and the town came into view. Days in the woods always brings a new fascination when you see civilization again. As in most cases we think first of comfort and a little warmth. Then perhaps the memory of that donut comes to mind. My pace quickened a bit in spite of the rocky ground which aggravated the feet. We had not seen any Northbound hikers other than one couple when we first began this morning. Surely there would be a real live bunk available.

The Nolichucky Came Within Reach.

With each switchback we were closer and yet it seemed that we never could quite reach the bottom. The shoals were now easily heard. A bunk… a shower…laundry… real food!!!!

We were there. The directional sign still taunted you as to how far you had to go. In my case it said that I had 1,822 miles to go to Mt Katahdin. No sweat!!!!

The place appeared to be relatively quiet. Surely there would a bunk available. We saw several from the trail……”Defib!!!!” Was heard several times. Things were looking up. We entered the store.

Jamie met me with a smile.

I fell to the floor and rolled around in agony. Woe is me! All my hopes and dreams crushed. The excitement of a mattress and roof evaporated.

“You can camp in the yard for $15. It includes the shower and laundry.”

Another night in the tent.

Once settled we grabbed the shuttle to an Italian restaurant where I inhaled globs of spaghetti…. and bread… and meatballs ….and more spaghetti. As we were arriving back at the hostel a car pulled up and began unloading home cooked food. It was Jackie the owner of a catering service in town. Each day she throws away left over food. At one point a hiker was renting a room above her business and saw her tossing food.

Tossing ended that night. He told her of the hikers and that they would devour whatever she cooked. And so she showed up on this particular night with home cooked green beans, corn, port, chicken, potato salad…. it was paradise…. I ate again and again….so did Joe. And then Kylo and the others. When Ghost arrived I’m pretty sure he ate the plates and styrofoam that the food came in. God Bless America.

Now I knew that tomorrow I would be able to hike on.