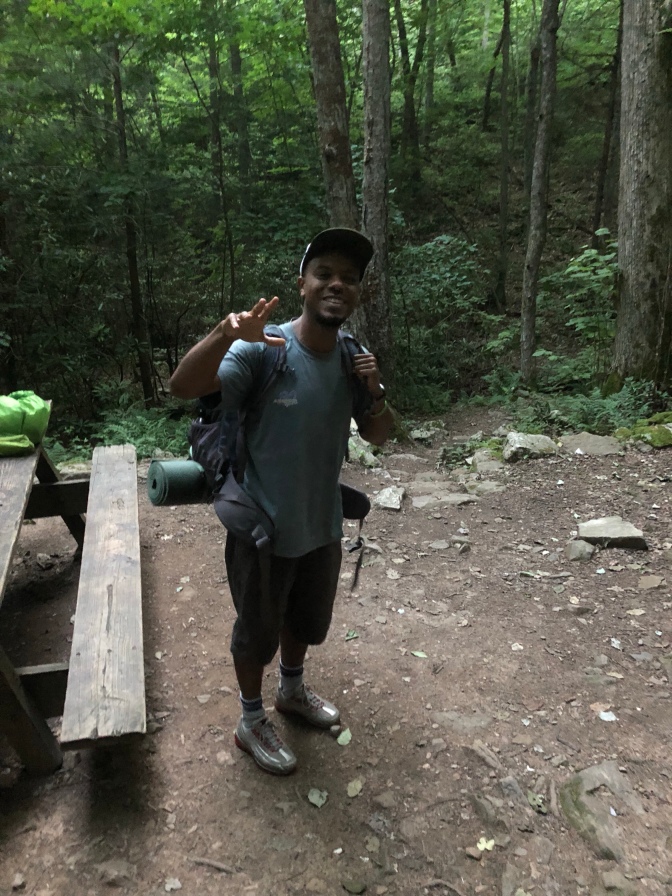 “I’ve Got a Decision to Make”

This is Cedric who is a social worker in West Virginia. He was one of the three who were fortunate enough to be taught how to walk by Stan the Unusual Man the previous day. He was new to camping so Hawkeye and I helped him with a few things. There were only the two of us so he actually set up his tent inside the shelter. I did the normal sleeping bag sleep in order to avoid having to set up my tent. My reward was a mouse playing in my hair all night.

Cedric told us that he had driven the hour and a half from West Virginia and then hiked 7 miles to this spot in order to think. I can normally do that on my porch but what the heck…..this was his thinking …. not mine.

At issue was whether or not to take the plunge and marry the girl he has been dating for 7 years. He said it just seemed so final. Hawkeye and I drilled him and determined that his girl is from Bulgaria. They met 7 years ago when they were freshmen in college. When she graduated she went back to Bulgaria for a short time during which he visited her there twice. She then returned to the States where she completed grad school at Ohio State. He was with her. She now works in New York.

For some reason he decided to build a fire. It was hot but he wanted a fire. As he was arranging the pit in order to start his fire he came across a small rock. It was like our Kindness Rocks in Oconee…..like Ebb the “Never Give Up” rock.

This one was also painted but it’s message related to the joys of life that we miss by not seizing upon an opportunity. There you had it. His answer to a dilemma. All he had to do was drive 1 1/2 hours ( 3 hours), hike 7 miles (14 miles) and build an outdoor fire on a 90 degree night in a random fire pit to get his answer. Hawkeye and I both jumped him. “There’s your answer. The rocks an omen. You’ve got to marry that girl.”

Later that night he asked me if I was awake. His mind must have been swirling. I asked if he loved her. “Yes, more than anything”. I asked if he thought about her all the time. “Constantly”. We became quiet. I didn’t tell him about my marriage record.

At first light by 6:30 he was packed and gone. “Thank you so much, he said as I took his picture. Good luck to him. I hope she doesn’t want him to move to New York City.

By 7:00 Hawkeye and I were on our way wishing that we had taken a picture of the rock and gotten Cedric’s address. At 1.8 miles we came upon this old school located next to the Old Settlers Museum. Hikers now camp there.

This is an 1880’s farm and home that Jan and I had explored during my first attempt at rehab. In general I don’t think most hikers stop to look at it because there is a restaurant just two miles down the road. Food rules out here…. and water….. and being dry…..and light equipment.

The Farmland of Virginia

We were now hiking steadily through farmland still active. It’s an area that seems to have harmony between hikers and property owners. 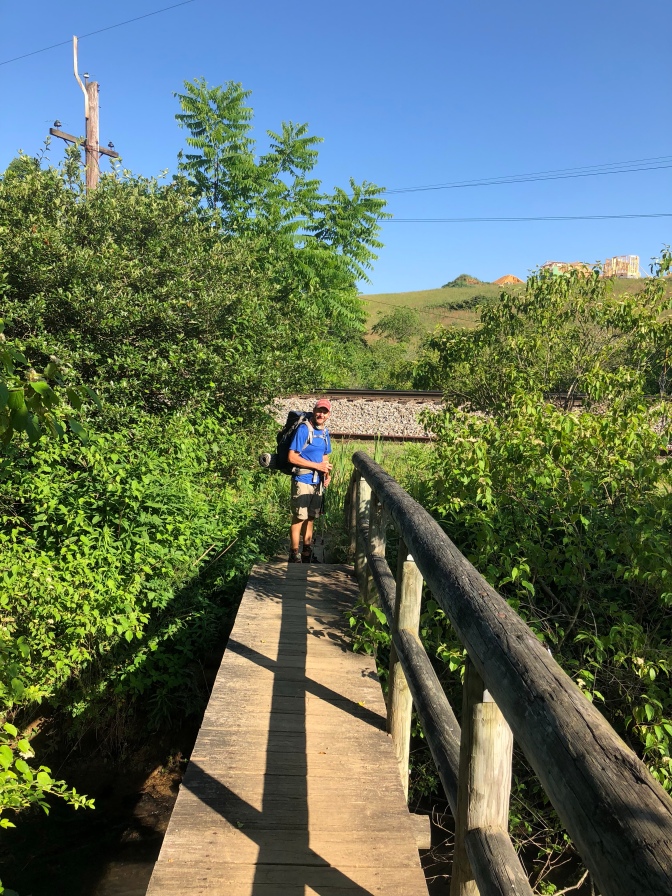 There must be more but this is only the second railroad crossing that I can remember. Hawkeye is wondering why in the world I was taking this picture. 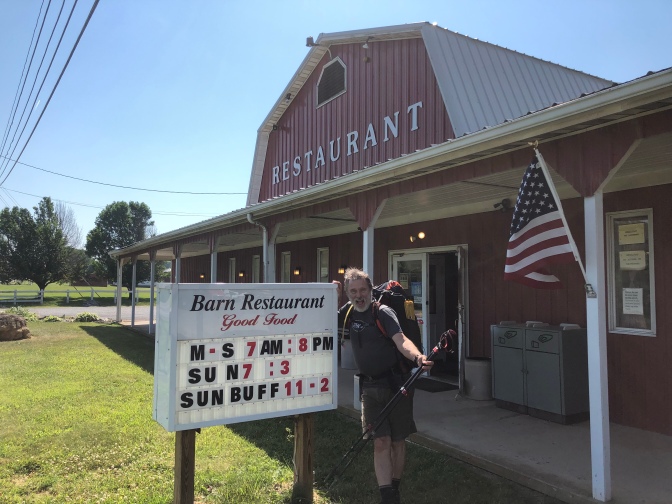 It seemed surreal that I was back here. Months ago Jan and I had eaten here while I was trying to rehab for a week near the trail. On that day she nearly had to help me into the restaurant. It’s a strange place. It’s big enough to have a concert in and has enough parking to park a stadium full of fans….. but it only has nine tables. You could play a soccer game on the unused floor space.

On that day I really felt that I would never reach this point. I was stuck way back in Hampton more than 100 miles away. And yet here I was once again and on both feet at mile marker 544. The picture was for Jan and PR Johnson who both worked to get me back here. 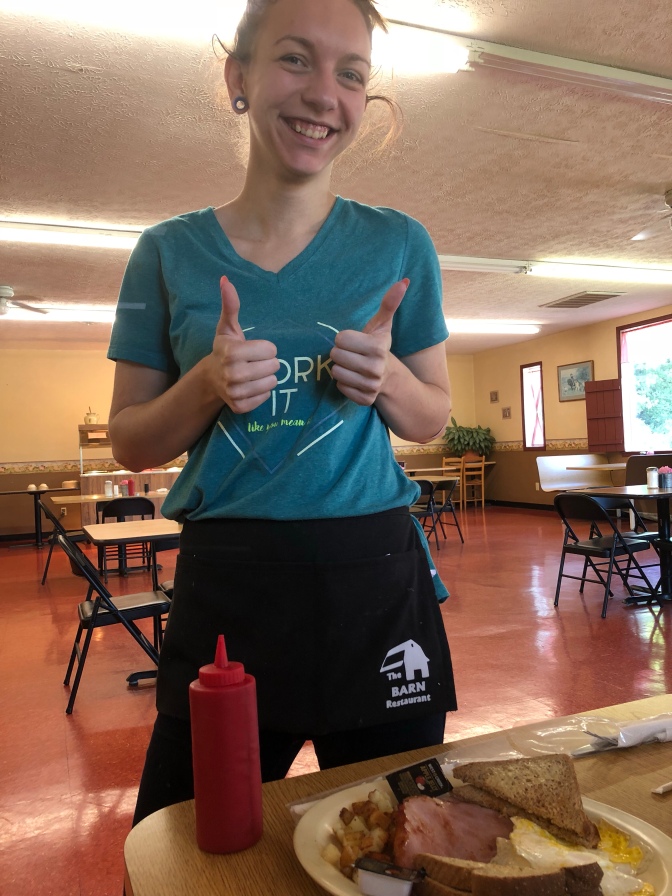 A Much Needed Breakfast

Courtney came to our rescue with breakfast. I bought a tub of orange juice and downed it in a moment. I ordered city ham…….she got a kick out of that…. couldn’t stop laughing. “I’ve never heard of that before. I’m going to use it”. I didn’t tell her that country ham is way too salty for me and tough as a leather strap. “Thanks for the City Ham idea. ” she said as we put our packs back on.

The Hike to Quarter Way Hostel

I was alone again. Hawkeye had moved on with both of us planning on a much needed shower and laundry at Quarter Way Hostel. Ive grown to like Hawkeye a lot. He worked much of his life in several management positions with the home plant of Harley Davidson Motorcycles. The job took him all over the world and that gave him the desire for more. As a result we have traveled to many of the same places. He’s also been on an Antarctica exploration. Several years ago he took his 12 year old daughter to Barrow, Alaska and the by private charter to an Indian village of 150 souls to view polar bears in their natural habitat. He and his daughter both wrote their thoughts in individual ledgers which were to include honest thoughts about the other. They shared on the flight back and the result was lots of tears and a father-daughter bond which will never be broken. Married for 28 years he talks to his wife daily and the connection between the two of them is obvious. He is now retired and elected as a district councilman in Pennsylvania. 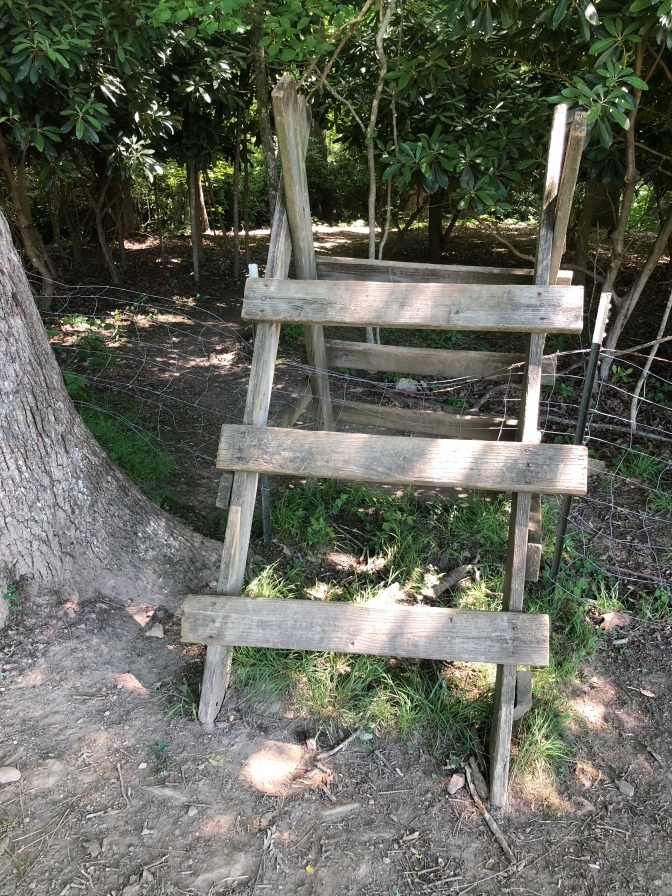 They must have taller cows in Virginia cuz these crossings could be used in military boot camp.

Now there are two names for you!!!! As I hiked alone I suddenly came upon two women taking a break at an abandoned shelter. “Are you Defib?” They asked as I arrived. “Yup…that’s me.” I seldom remember my actual name out here.

Purple Streak (whose hair had a section purple) is a retired nurse who proudly announced that she was going to turn 71 in two weeks. She began her hike on March 23rd but fell on the trail and broke her wrist and had to rehab. I’m unclear as to whether she jumped all the way up here because this was their first day back.

Apple Bottom had begun on March 17th and made it to this area where she fell and smashed her head on the rocky trail. She managed to hike out over six days and was met by paramedics at the Settler Museum sign. They wanted to transport her but she refused. She returned home to Oklahoma where her Indian insurance paid for a Cat Scan proving she had a significant concussion. She vomited for several days on the trail. I didn’t say anything. Now they were both back and began where Apple Bottom left off. Hours into it they decided that they were going to quit. It was too hot and Apple Bottom had fallen again.

I almost missed this sign. By the time I got there I was exhausted. Just beyond this I met two unknown hikers who were with Goldie. I hadn’t seen Goldie since the Izzy sharing moment. I believe that he told Hawkeye that he had lost 30 pounds out here. I believe everyone can say that. Hawkeye has lost 17. His wife would rather have him lose the beard. It’s just not conducive to shave out here!!! You don’t see us harassing you about painting your toenails…….do you?

Into The Next Valley

By now I was stumbling. The promise of a hostel kept me going. Running shower… clean bed….. food……keep walking …. don’t think about the tired feet.

What a wonderful couple!!! Michael and Monica Gertz. Michael “Chairman” is a marathon runner. His wife Monica is known as “Mother Gator”. They were waiting for their son who was finishing the entire AT at that spot. His trail name was “Gator” and he was due within the hour. Goldie was there and I took advantage of ice cream and Gatorade as we talked. They were a joy to talk to and so very excited to be picking up their son after the completion of this trek. He had begun last July.

A perfect way to end this day. A great hostess Tina had hiked the AT in 2014 with the trail name Chunky. (Which she certainly isn’t). The home was immaculate and well organized. She had thought of every need and we were all soon clean and shiny. Before long we had Hawkeye, Goldie, Stogie, and Tapioca there with us. We avoided the TV and spent the evening in rocking chairs on the front porch talking. The picture is of the view across the street. Moments like those make the painful moments go away. We shared….we laughed….we crashed and burned. Tomorrow we would hike on but it would be more than difficult to leave this place.