This is a picture of an absolute downpour.

……..And one of the reasons that I decided to zero in Pearisburg, Virginia. One of the other reasons was that Jed had picked up his guitar from the post office and was going to spend the day playing it. Since we’ve teamed up hiking it only made sense. I bumped into a guy named Skeeter who offered to be our shuttle so we had him take us to the local restaurant for breakfast. As we ate the skies opened letting down one of those Southern rainstorms that suck the oxygen out of the sky and leaves you hunting for a bridge to park under until it passes. Both Jed and I ate a large breakfast and, in general, sat there with big heads proud of the fact that we had made such a wise decision to stay out of the woods.

We had a delightful waitress named Kelly who was single handedly tending every table in the restaurant. She was fascinated with our hike and asked what we do when it rains on us. The answer seemed quite smart aleck but the only response seemed to be “get wet”.

I don’t know why they didn’t have any help for her. Every good ole boy in town was there eating. Jed and I listened to her ability to remember every order and where it belonged. She never slowed down. Surely she could be destined for greater things but she probably make more in tips than college grads make with degrees.

Pearisburg is Steeped in History

The downtown was old (1808) and quaint and dead as that possum we found dead in the highway. On the outskirts of town sat the culprit: Walmart. I wanted to bring the downtown back to life. The people were so friendly and helpful. The woman who ran our motel did our laundry for free. The maids made sure to ask if everything suited us with the room. A local lawyer approached us and asked if we’d like a ride to Blacksburg because he was going that way. The owner of the hike shop called the owner of the barbershop which was closed and got them to open up to give Jed a haircut….. and then gave him a ride there.

Would most of you drive by the Plaza Motel? More than likely. $44 a night or rooms by the week. On one side of us Jason the restaurant guitar player who lives by himself and is working on the pipeline. On the other side is a guy who runs heavy equipment and is busy on one of the mountains moving dirt….. except it’s raining so he can’t work and won’t until it’s dry for three days. So he sits on the porch in front of the single room smoking with his “girlfriend”. When we discussed being out of work so much Jed mentioned that it was good that he had his lady with him. “Yeah… she’s a handful,” he replied. For three days I didn’t see her talk other than to ask for a cigarette. He stayed busy grilling something on a tiny grill on the tailgate of his 80’s model S10 pickup. He drank several beer. She had two boys also there playing baseball in the parking lot with a plastic bottle and a metal rod they found .

And then there was “name withheld”. She is taking care of her Momma who is “not right” and her aunt who is really her dead uncles girlfriend. “He beat her real regular.” “We all live in the room and it’s really nice because we have a hot plate and a baby refrigerator.” “Sometimes we cook vegetables but most of the time we can get food that the hikers leave behind. 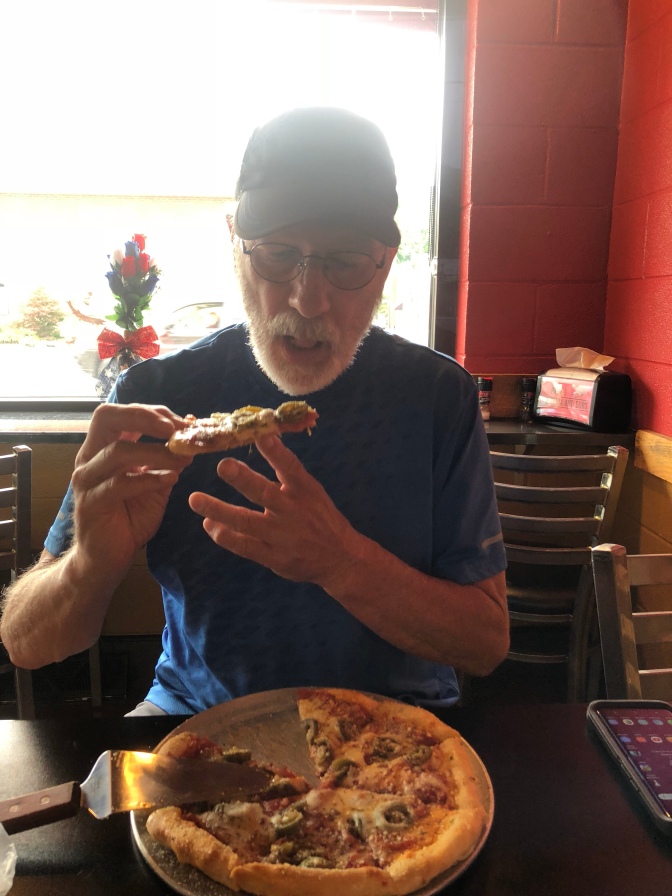 We Felt Guilty. Jed with the Pizza

We ate well…..we tipped well. We conversed…. we learned….we saw suffering while doing the best they could.

We saw a willingness to help each other and to help a hiker even when they hadn’t talked to “Momma’s sister since 1993. It was a dozen downward spirals in a confined space. It all seemed to be a breakdown in their own family.

We returned to the trail thankful…. wanting to help but not knowing how.