We are wet…we are dry…we have made it up a mountain!

If you remember from yesterday’s post I set up my tent and rain fly at Bailey Gap Shelter so that it would dry from the previous two days. The plan worked like a charm…….. until…… it rained again at 0600. I love being in my tent listening to the rain on it….. but…. this morning I really wanted it to be dry. Wet gear seems to double your pack weight. On this third day of six I really needed a lighter not heavier load. The hike to Mountain Lake Road was all up so by the time we reached the forest service road we were more than ready to dump our packs and ram down some snacks. 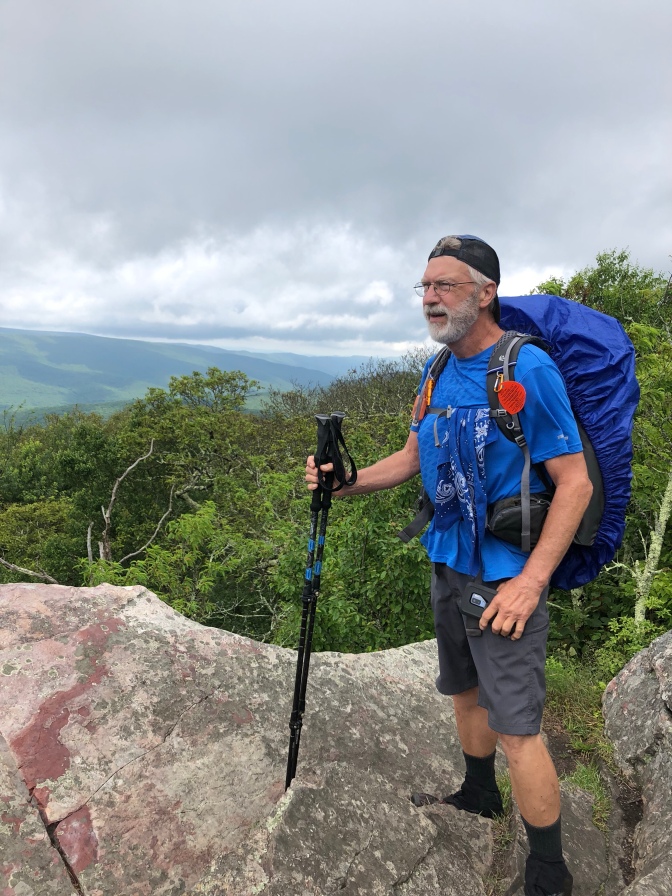 The prize for the wicked climb was our arrival on top of Wind Rock. It was from that vantage point that I posted one of the videos with Jed giving the thumbs up. After two sub 12 mile days we were intent on getting closer to 15 miles knocked out so we didn’t tarry long. Actually claiming to knock out 15 miles sounds like we could do it with relative ease. Ha!!!! Each and every step was a workout and many days I survive it by not looking at my watch other than to hike an hour and compare how far I’ve gone compared to other hours. You know??????? An hour is forever!!!

We Are Not Being Cheated Out of Views

At this point we are hiking the West side of the ridge but soon that ridge would narrow to the point that it would drop off both sides. I don’t mean dangerously narrow but close enough that you are looking both East and West on each shoulder. 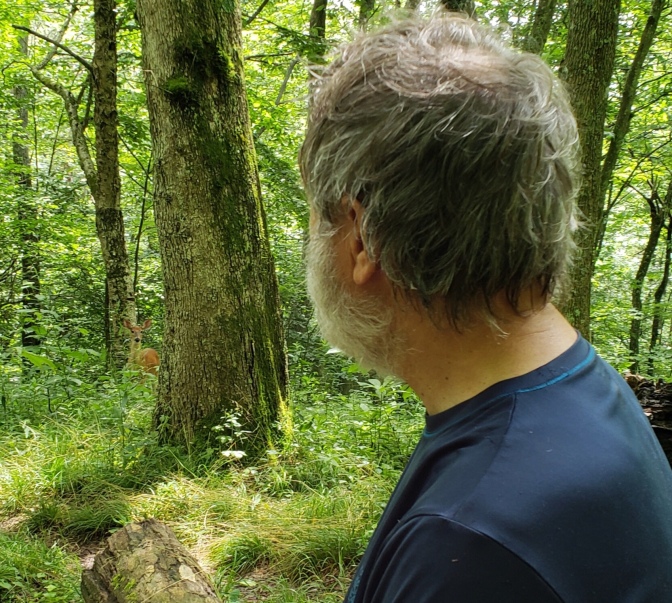 At 1202 we were climbing down another knee jarring descent when we came upon a potential camp area. The good ones are those that have large trees down thus inviting your derrière to sit upon them. It is times like these that I realize that our derrières and legs must actually spend quite a bit of time talking to one another behind our backs. “Come on” says the derrière to the legs. “If we work together we can coax this jerk into sitting on that log to provide us some respite.” ……..and so it happened on this day. We were busy preparing lunch when Bambi decided to come pay us a visit. I don’t really know why that seemed so special…… we all have deer in our neighborhoods. I see them just about every evening I go home. I think Jamie and his wife Erin share their home with a herd of them…… well kinda. Anyway sharing those moments with this doe was a time of complete quiet…. and peace….and contentment.

The Reappearance of Orlando

From our deer sighting we moved on and about an hour and a half later bumped into Orlando hiking SOBO. The last time I saw her was way back when she left the trail to get a Coke. She told me that it was the perfect Coke and the perfect hostel and that she had decided to stay there. She then made it into Pearisburg and was told if she was shuttled North to a point at RockyGap she could hike backwards and only have to carry three days worth of food. Evidently there were a lot of them doing that. Since they had just been let off it meant that they were about 2 1/2 days behind us.

Well I’ll be darned. Now I’m really confused. Moments later we came upon Apple Bottom and Purple Streak. I met them way back around mile marker 545 before the Quarter Way Shelter. We were now at 660. They told me then that they were going to quit. Both had been injured but had gotten back on the trail that day. I asked Apple Bottom about that and she told me that the word on the trail has always been “don’t quit on your worse day.” That had been their worse day but they stuck it out and now here they were more than 100 miles later still getting it. We did ask about her name and she said it comes about because she is a teacher (Apple) and she’s always at the(Bottom) of the group she’s hiking with. Well…… ok them. She says she’s been asked to turn around quite often to see if it’s true.

Purple Streak is a my age compatriot who is a retired nurse and has dyed her hair purple. She’s the one who fell and broke her wrist way back in Georgia. 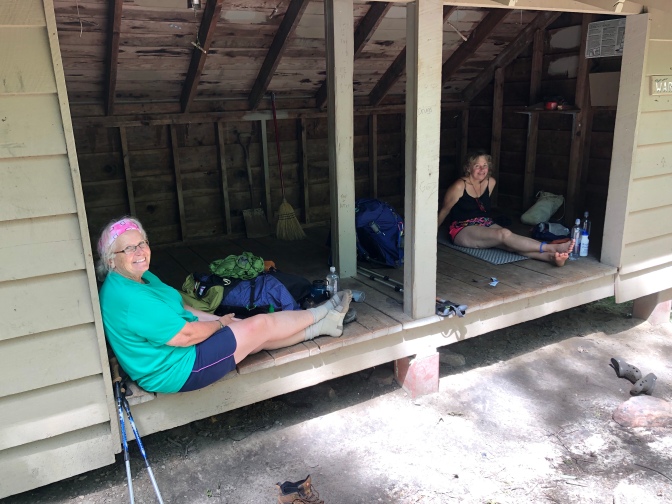 Oneida and Lucky Too

We finally reached the next shelter and found Oneida and Lucky Too who had also shuttled. They had found some Chicken of the Woods which are the orange mushrooms found attached to dead trees. I’ve always taken pictures of them because they look like they should be growing in Clemson. Anyway they had broken them into smaller pieces and were preparing to sauté them with olive oil, garlic and onion. They say it taste like chicken. I think that it what you are suppose to say when you are about to eat something unusual……. “It taste like chicken”

We moved on…. as a matter of fact 5.8 miles further for a total of 14.6 miles to Laurel Creek Shelter. No one was there so I took the opportunity to sleep in the shelter. Day three was complete with the hope of 14.8 the next day….. we thought. Our food was running low. Calorie needs were causing us to snack constantly. We figured we could just make it if we rationed. Oneida and Lucky Too had given each of us some cheese in return for Jed building them a fire. The barter system is still alive and well out here when you are hiking on.