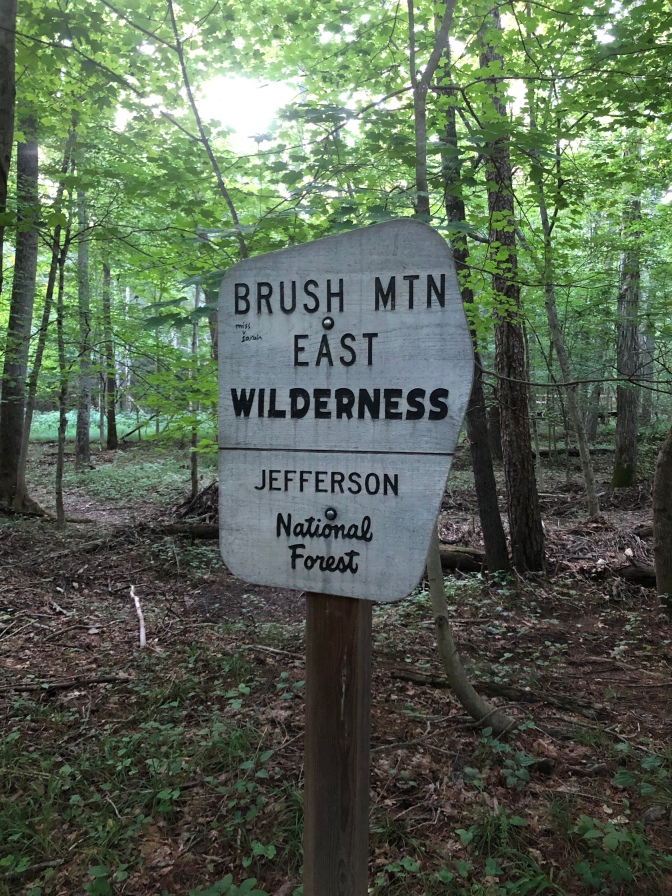 Well maybe a brisk walk. We had talked…. we had discussed…. we had compared…. we scratched our heads …. we decided. We are going to flip. But first we had to survive our longest mileage day over the worse terrain on the hottest day. What… me worry? Yup. It was going to be a doozy. The first 9/10 of a mile would be relatively easy over terrain that we intended to do last night. At 9/10 it turned into probably the toughest non snow hike I’ve had to date. We crossed a series of bridges over several waterways in order to get out of the valley. Then ….. the climb began…. it was an ouch. The Brush Mountain Wilderness is not for the faint of heart. 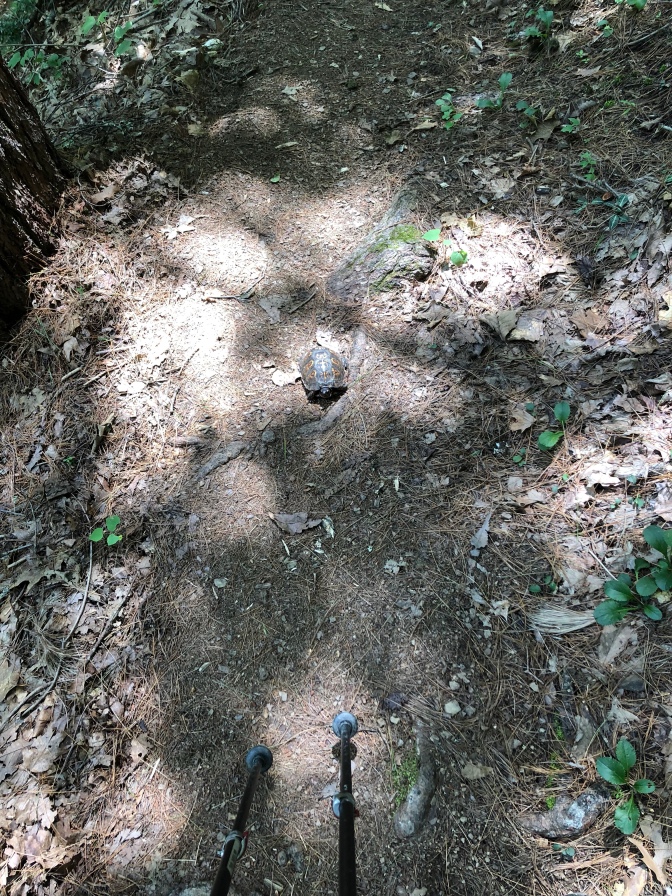 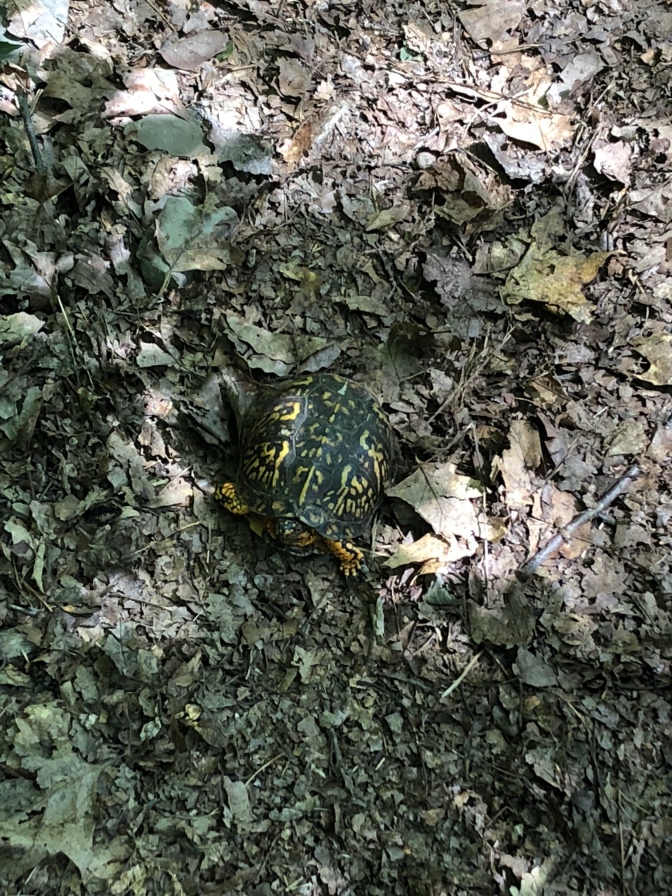 The Race to Katahdin

The 15.3 miles included three tortoise sightings. It goes to show that with teamwork you can easily achieve your goal. The hares don’t stand a chance hopping around in a disorganized manner while the tortoises trudge on. They now lead the rabbits six to one. Interestingly enough every one of the six have been walking on the trail Southbound. They must be headed for Springer Mountain in Georgia. Jed and I are like them…… slow…..but steady. 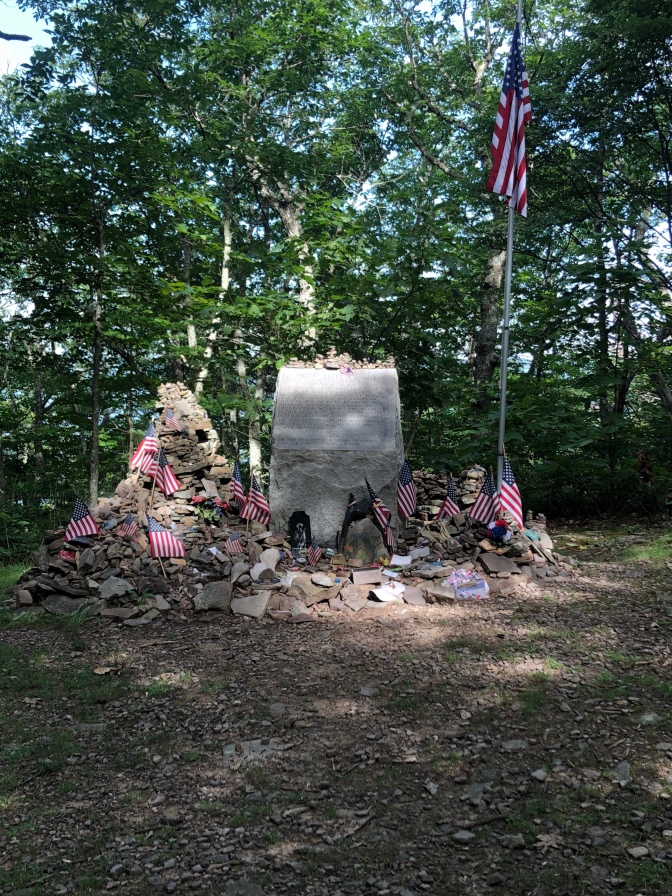 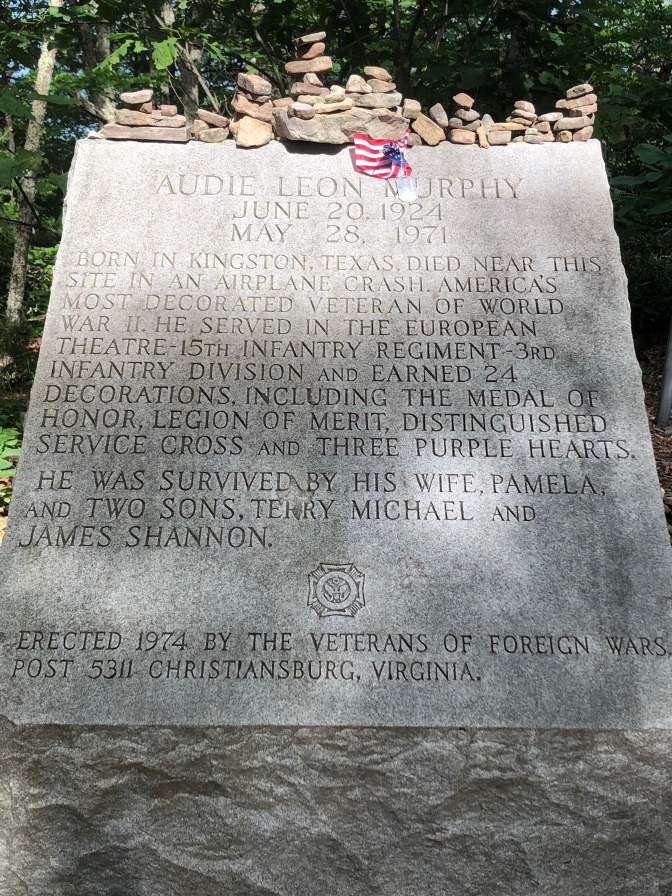 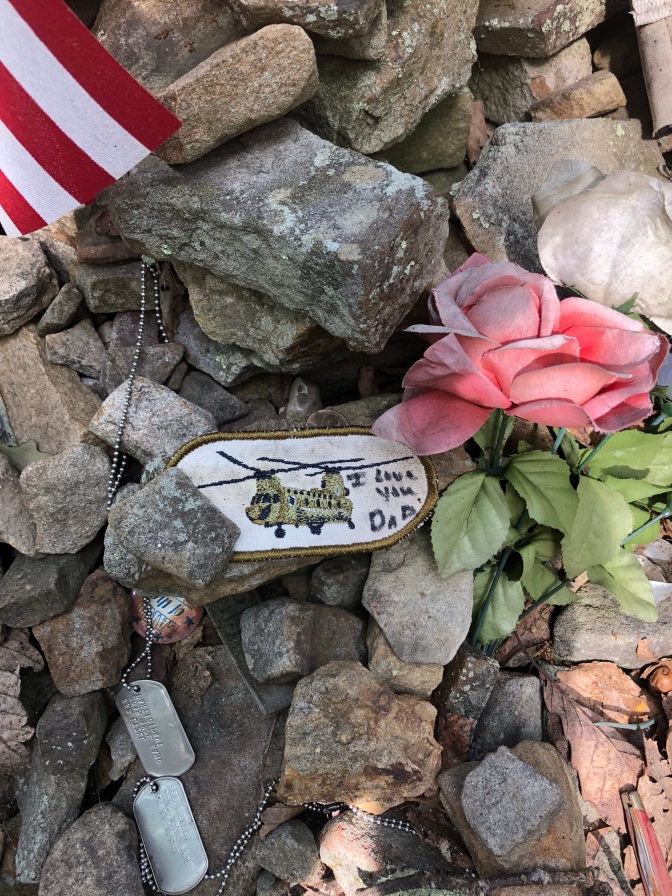 Our first goal was to reach the Audie Murphy Monument on the top of Brush Mountain. That meant a 1,538 foot climb over 3.7 miles. Murphy was the most decorated soldier in World War II. He became an actor for 21 years after the war and played mostly in Westerns. The movie I remember most was the World War II saga with Murphy playing himself in the autobiographic movie To Hell and Back. He died in a plane crash on this mountain with others on a business venture in 1971. The local Veterans of Foreign Wars post erected the monument three years after his death. His life is an interesting Wikipedia read.

The monument has had many rocks added to it by visitors including dog tags, military unit patches, and verses. Of particular interest to me was a small plastic toy soldier like the ones we played with as children and a patch with a Chinook helicopter on it and a hand written “I Love You Dad” etched on the patch. I sat on a bench near the Monument and felt the hair stand up on my neck and arms. A man who had given so much in the war only to die before the age of 46 in a plane crash. Rest In Peace Audie. 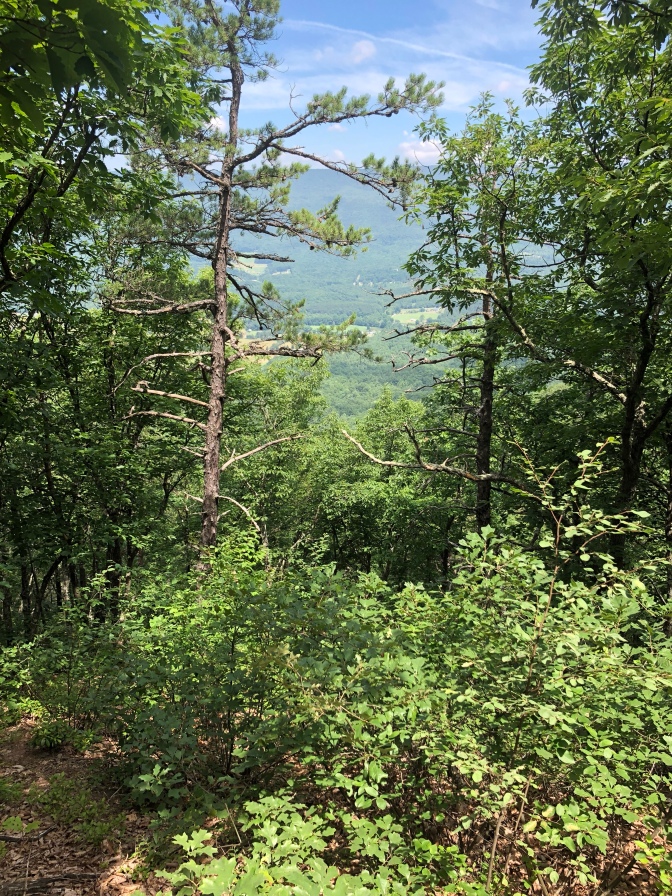 The Valley Toward Catawba at 11:44

Shortly after the monument the trail became…….well… ah….worthy of bad words. Occasional rocks became continuous rocks which then became continuously uneven, unshaped, pick you up and slam you on the ground rocks. I regretted that my boots now have 1,000 + miles on them. Replacements are on the way!!!!! Our thighs, knees, calves and ankles and feet mentioned suing us for abuse. We walked body + wide ridges, we slant hiked along shelf rock that led no where but down, we hiked 20 feet up and then 30 foot down over and over again until my hands were sore from gripping the poles and pushing myself up and over the next peak. Jed’s son Bradley mentioned that we might be dealing with a case of a few screws being loose and I agree with him…… and they are my and his father’s screws! It got to the point that we didn’t want to see any more views…. we wanted level ground sans rocks!

Finally we walked into a short area of reprieve with a small section of rock clear trail. The trail was enveloped on both sides with bushes and small trees. There was a rustle in the bushes and then the sound of an animal hightailing it down the mountain. Jed was in the lead and we both stopped. There was still something there. In a moment I saw a baby raccoon walking toward me in the brush. He made it about two feet when a second one jumped on him from behind. They scrambled up and down a tree multiple times in a game of chase oblivious of our presence. Momma raccoon had split town down the mountain wanting nothing to do with us. We watched for awhile and finally had to move on because it was beginning to get dark and we didn’t want to be stuck on this mountain after dark. I took multiple pictures but found that I could not pick the raccoons out of the foliage. I did get a short video of them which I’ll post on Facebook. 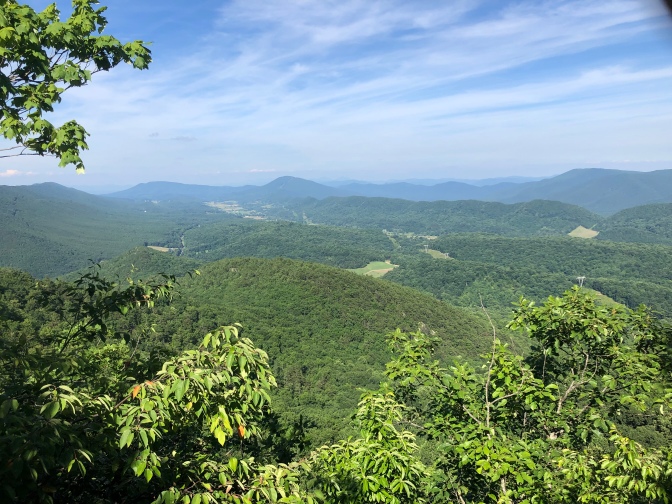 Raccoons Behind Us We Were on A Race to the Highway. Sadly it felt like we had both hands and feet tied behind us.

We were now intent on the flip to Maine and this section was now between us and that happening. The numbers didn’t work, Jan created a stat chart that tracked daily mileage, NERO mileage and down time. It wasn’t possible. I’m doing 14.2 miles daily on full hike days but that wasn’t going to get me to Maine in time.

The 700 Mile Dance: (Postponed Until I Get Some Energy)

Jed actually found the marker rocks. I was too busy feeling sorry for myself as I walked right past them. After all what’s a few more rocks among a world of rocks.

We Love Rocks: Not

Jed scrambled up and over a peak. We thought that flipping made sense at this time because it would allow us to hike in an area of bigger rocks!

Our mileage was slowing to a crawl.

Flipping to Maine would allow us to continue our goal of hiking in one direction. It just would be in the opposite direction….SOBO. 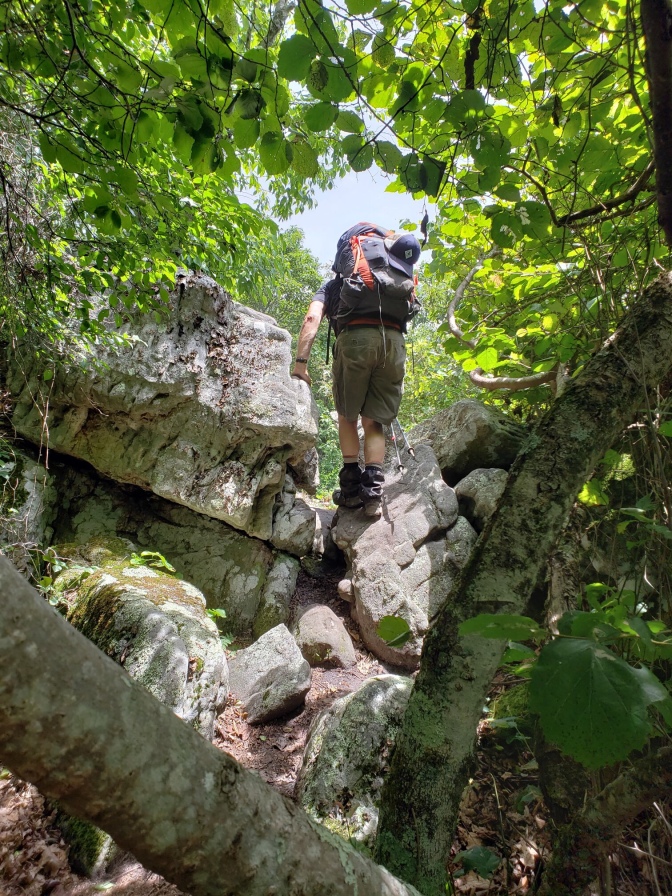 I have been intent on hiking this trail from the Southern terminus to Katahdin. I have carefully avoided missing a step of the trail down to the inch. Always going North…. always picking up the continuous touch point. But now that we know that there is no way to make it we realize that it will be better to flip sooner rather than later. There is a whole lot of the Northeast to tackle before Fall arrives.

Trails have been Created by folks going the wrong way

Hiking SOBO would allow us to hike toward home. It means that McAfee Knob would now be near our end point. That’s an iconic point that’s as well known as Katahdin. We would be hiking out of a quickly developing winter into somewhat milder temperatures. Of course this is all conjecture. 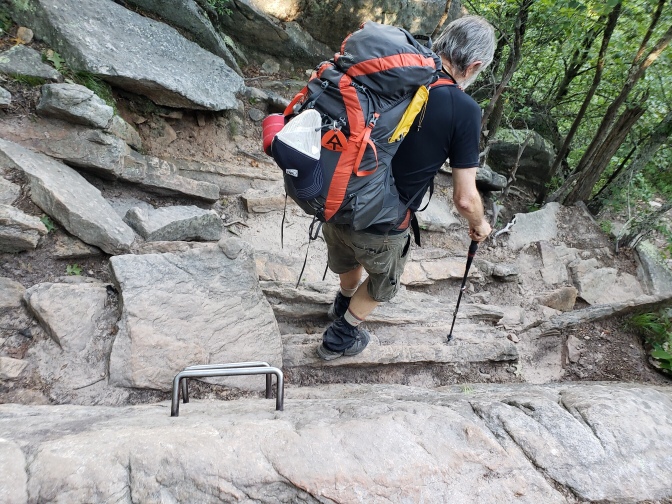 At Least They Gave Us Handles Here

The thought of getting our feet wedged in the rocks was ever present. Once you made a decision of which way you wanted to go you were pretty much committed. The weight of your pack would finalize your decision if you wavered. 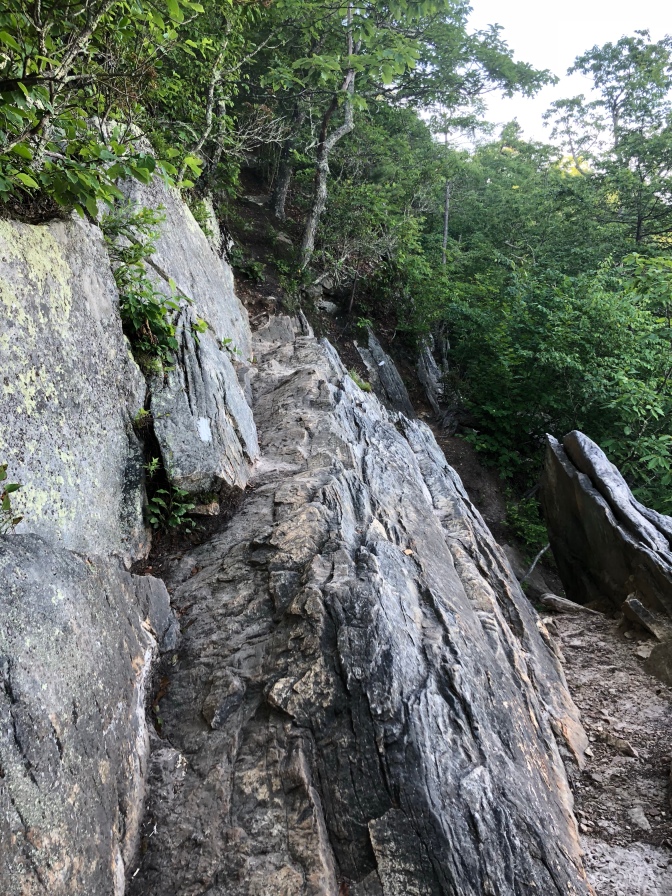 Sliding down a rock 3 times taller than you when you don’t know where your next toe hole is can be a bit hairy. The final step to the ledge below? ….. a jump onto weary feet.

Understatement of the Day

This sign basically says that the trail ahead is treacherous. It’s the understatement of the year. To make matters worse we still had two miles to go and the trail actually managed to loop back up and over another rock cliff or two. When we hit the highway we wanted to drop to the ground but Four Pines Hostel was 1/3 mile away. That seemed to be 100 miles. When we arrived there was a cooler at the door filled with cold drinks and popsicles in the freezer! They were downed in moments! I think I felt shell shocked. I selected a bed and planted myself for a moment.

We were out of the wilderness and the decision to flip to Maine was in place. It was time to finalize plans to accomplish that but first …… recovery,