Joe: Owner of Four Pines Hostel and Our Shuttle From The Trail in Catawba, Virginia

The move was in place. We were heading North and the decision to stick to the ground ruled. A train- bus trip was in order both for financial and convenience reasons. Besides……. I had never done a long distance train run in the United States. It was time to burst that bubble.

Step 1: Getting from the trail hostel to a motel in Roanoke, Virginia where we could jump aboard Amtrak Northbound. That segment was accomplished via Joe the owner of the hostel. We left the chickens behind but brought along Joe’s dog Little Bit who promptly fell asleep against Jed’s leg in the front seat of Joe’s pickup truck. 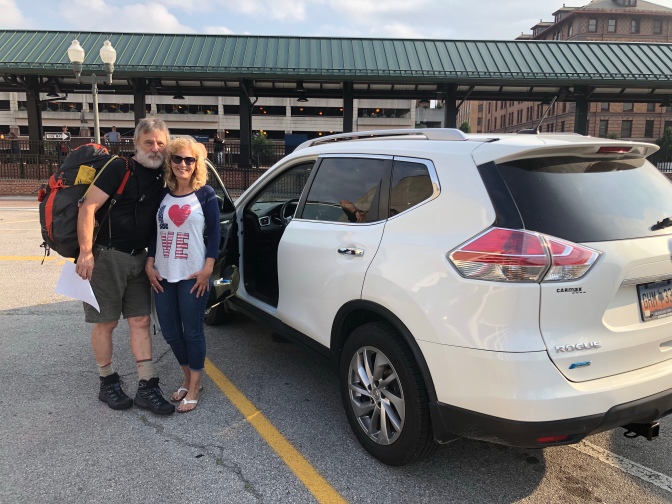 The Transition in Roanoke to the Train: Thanks to Jan Haney

Step 2: Maneuver to the train station. This may sound easy but everything is on line now and not necessarily clear. No agent to speak with…….show up 10 minutes early…. I still don’t completely trust those square blocks that you get on your phone…… you know the ones that get scanned.

On top of that when we went to catch the train the roads were blocked. They were having a road race and the loading platform was right in the middle of the course……. of course.

Jan had brought me new hiking boots and a couple of warmer articles of clothing. As I sit on a front porch in Millinocket, Maine I’m thankful for them and her for bringing them to me. 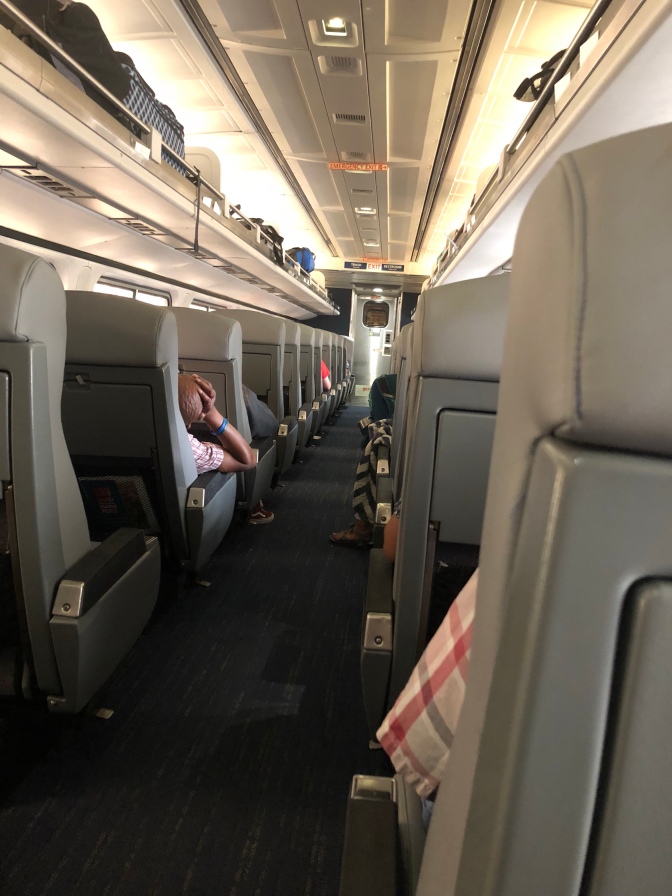 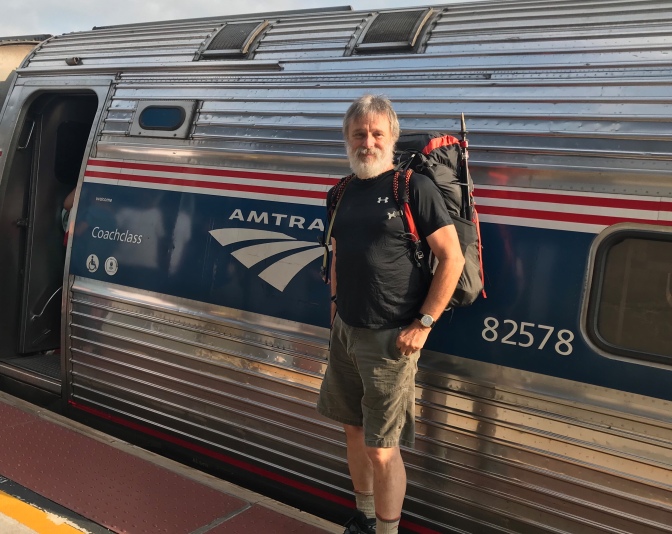 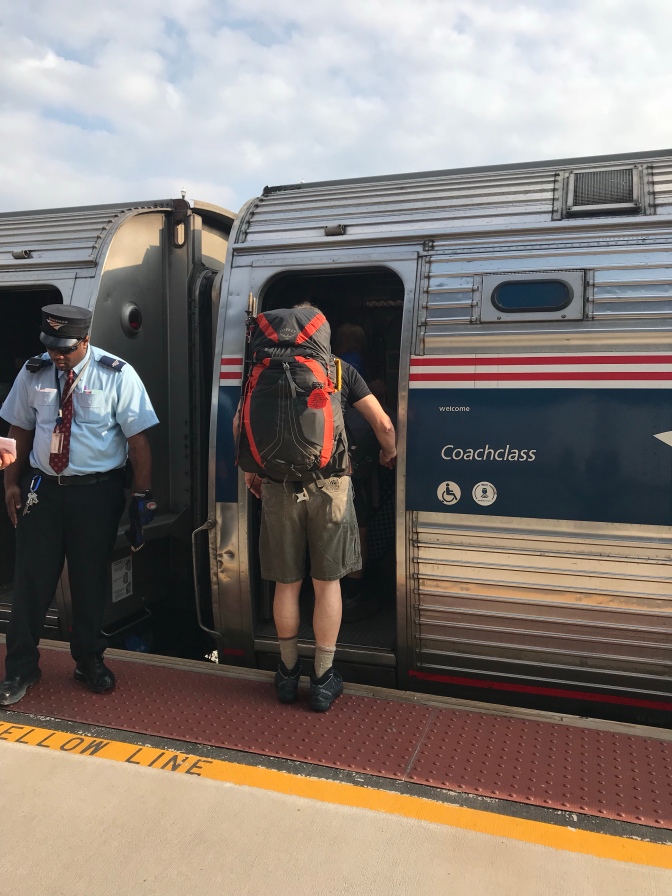 Life on the Amtrak

Overall I give it an A. It cost $86 + all the extraneous tax for a total of $102.50. Much cheaper than other means. The only bad moment came after Jed and I went to get food. When we came back there was a woman sleeping across our two seats even though we had flagged the seats as taken. Half of the train was empty but she chose our seats. It wouldn’t have mattered but our backpacks were overhead and we had been getting in and out of them. I thought about “breaking Western” on her and shooting up the place but in the end meekly left her there after applying several evil voodoo curses on her. This is, of course, my new gentle retired totally mellow soft as melted butter compliant self coming to the forefront. 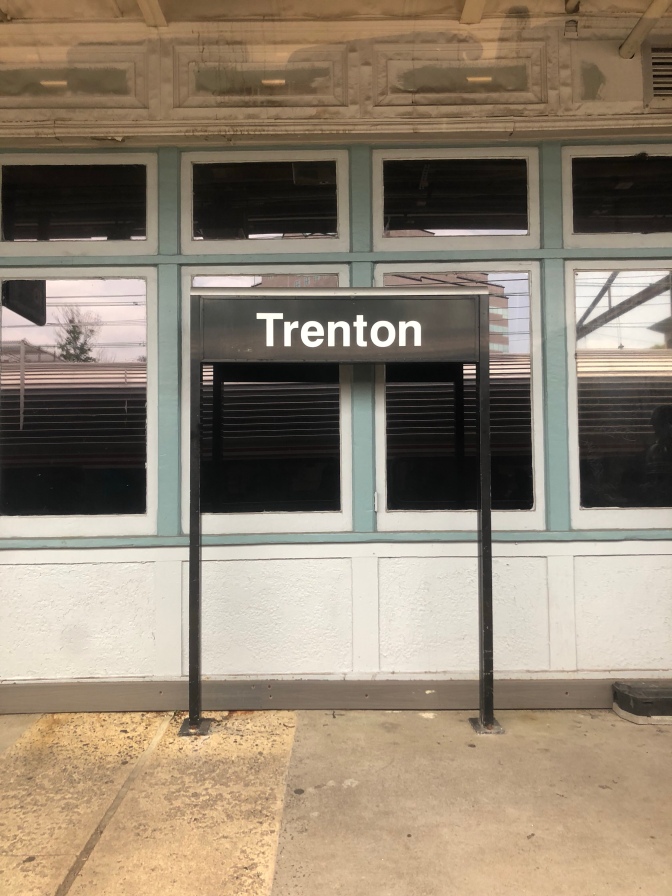 Not once did I turn the steering wheel, use a turn signal or pay a toll. I closed my eyes several times while moving, texted, and actually flushed a commode several times without stopping at a rest area. Yes……. the train was the way to go.

The City of Philadelphia came and went in full view. After Penn Station in New York night fell and Connecticut, Rhode Island and Massachusetts fell away incognito. I was abruptly awoken with “Highway 128….Westwood!!! Get off before the doors close!” Two passengers blocked our way as they struggled with their luggage. We waited it out and then stepped out into the midnight air. Massachusetts was under our feet. Jed said everyone talks like Yankees.

No one will ever say that the Class of 1965 at Nipmuc Regional High School was not close. To this day a text, email, or phone call will bring classmates out of hiding. I called Kathy Rooney Humes who contacted Dinah and in a moment she offered to pick Jed and I up and let us stay at her place in order to not cause my mother a problem since she has to get up for a very early dialysis ride. Dinah then contacted the class members and on the spur of the moment we had a dozen members out for the evening. Considering the fact that we only had 71 or 72 in the class that’s huge….. we’ve also lost a few members. 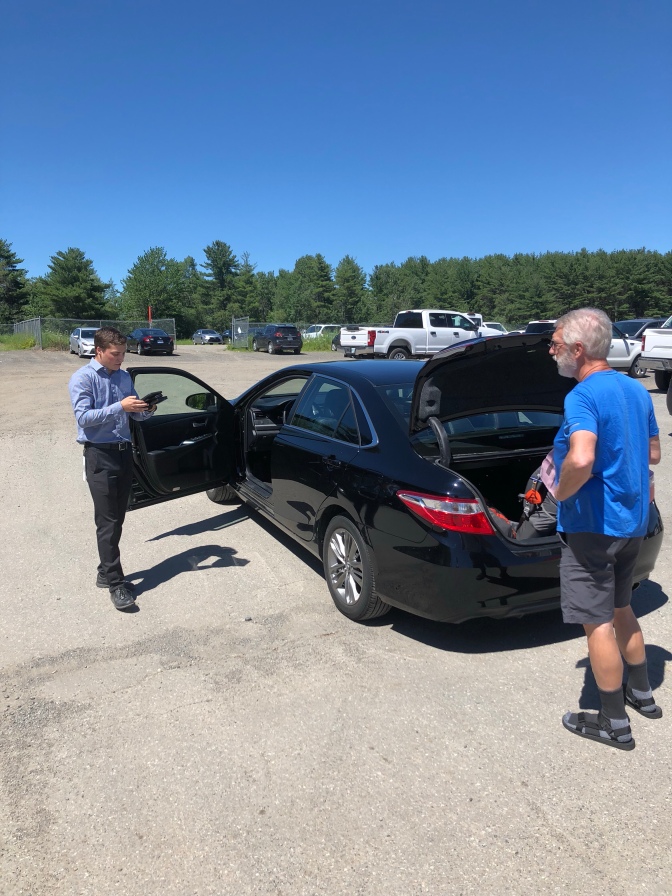 Step 4: There is nothing better than having a set of wheels when hanging out away from home. Flexible comes to mind. I drove Jed around my home town while he practiced reading signs with a Boston brogue. Enterprise came through for us and we soon opted to keep the car and turn it in at the Bangor International Airport. I’m not sure if they consider the fact that they fly into Boston enough to claim to be international. When we googled the airport to find where to return the car on Saturday it said that the airport was closed at one in the afternoon. I think everyone had gone to eat lobsta rolls.

The car was a great success and we managed to return it without a scratch thus completing step 4.

Step 5: That left us with a short shuttle back to the bus station where we would board a John Cyr Bus service ride to Medway, Maine 60 miles away.

Step 6: The Concord bus station provided an interesting collection of folks all attempting to get to Medway for one reason or another. By the time 6:30 pm arrived there were enough people there to fill the once a day bus to the next location.

Dryl (Benadryl) and Peebo had just graduated from the University of Missouri and had decided to hike the trail North from Harper’s Ferry For 300 miles and then flip To Katahdin. We spent quite a bit of time with them while bus sitting. We were soon joined by Bit Coin and then Mega. By the time the bus arrived there were eight of us including three who were brand new SOBO hikers. It was strange to hear them say that they didn’t have a trail name yet when asked. We felt like hardened veterans in comparison mostly meaning that our equipment smelled worse than their’s did. The bus ride took one hour and ten minutes and before I knew it we were pulling into a convenience store in Medway. In the broken down parking lot sat Step # 7 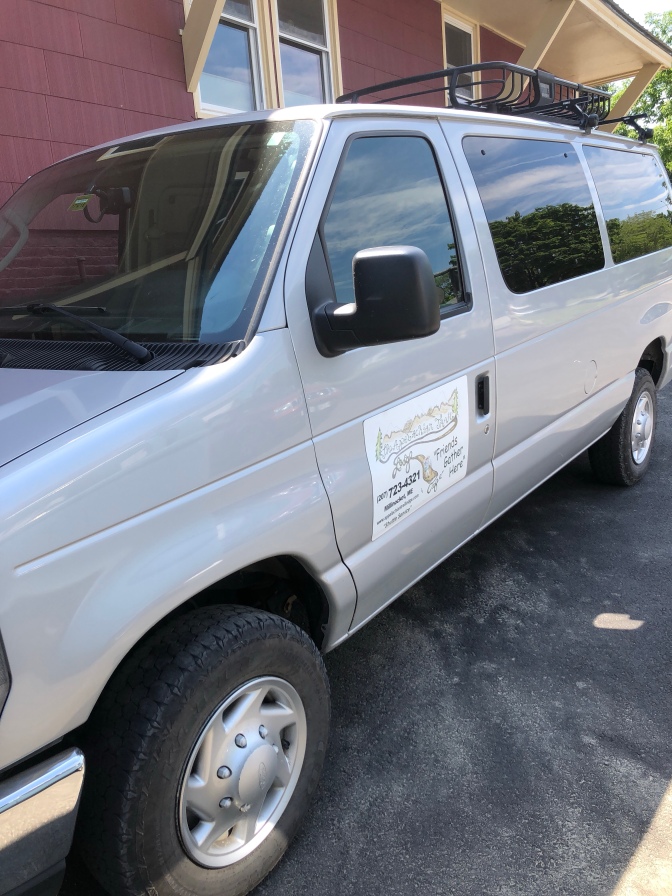 In the lot sat the van for the Appalachian Trail Inn. The driver was ready and in piled 10 would be hikers. It was 50 more minutes to Millinocket and the driver spent the time telling us how to prepare. Eight to nine days of food to survive the 100 mile wilderness, head netting to ward off the incessant attack of flying pests, the requirement of a registered campsite within the park because you wouldn’t get out in a day, hiking the knife’s edge a half mile four foot wide ridge with drop offs for 2,000 feet on each side……I think I’ll wait until the movie comes out. My confidence was growing by the second. ” And oh!” Added the enthusiastic driver, “Do you remember the really nice switchbacks that you hiked in the South? Those have not been invented here yet. Everything is straight up or down here over massive rocks!”

I was ready for it. I’m nearly as old as these rocks. Why would I allow a little peer pressure get to me. I own this….. I’m going out in the morning!!!!! The drivers final words….. “I’d really recommend staying an extra night to strip your packs and food to insure that you are truly ready. From the North many never get past these first few days.” What? Wait? Wieny Out after all this for 24 more hours? No way!! I’m going!! I’m a man’s man!!! We stayed. 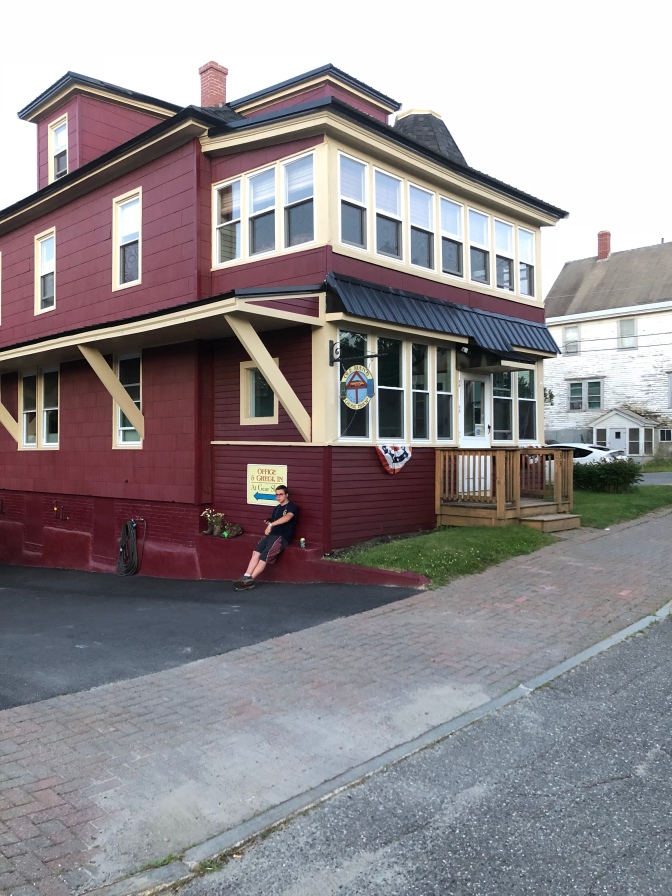 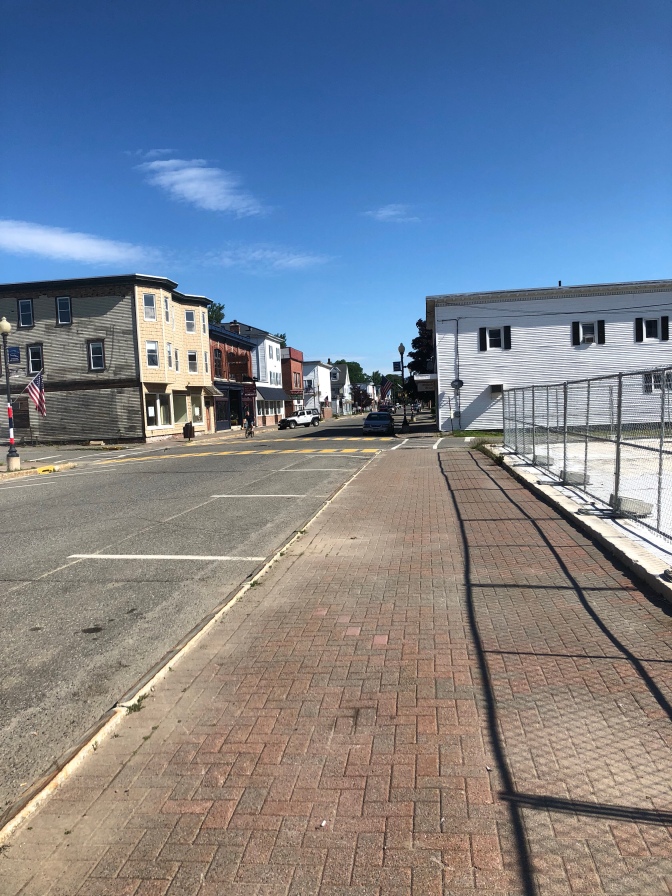 I Now Sit On The Porch of the Lodge

The day has passed….. my pack has been stripped down…. I’ve been eating cucumbers and massive amounts of vegetables….. I’ve drunk enough water to sink the Titantic…. I’ve bought electrolyte tablets to add to my water…. and a mosquito-black fly-Gnat head screen to make me feel like I’m in Africa. I have new boots with actual tread. I have two ” a little bit warmer” shirts for the chilly nights. It’s like the first day 125 days into this journey……. I’m a rookie veteran. I think of my classmates…. maybe we could call another meeting just for fun……. no……. I’ve got to do this………….