The first section of my rehab hike on the AT was complete. I arrived in Damascus without pain intent on continuing the trek.  Tonight would just be a stay in the Hiker’s Inn Hostel on the main street of Damascus.  That morning I left Danish at the previous camp site as she stayed behind to cook breakfast.  Not long after I arrived in Damascus she also trudged in planning to take a zero day there. Conversation picked up with the others there as trail names were thrown around….”Pizza” who was born in Germany and lives in Isreal, “Determined” who was hiking South and saying that he was old, and Oso from everywhere who spends his time doing post catastrophic storm construction.  He informed us that Oso was Spanish for bear…rather appropriate for these here parts.

There Would Be No Moss Growing On Me in Damascus

The night passed quickly in Damascus.  My hiking has been so inconsistent the feeling of a bed did not have any significance to me.  Danish and I talked quite a bit about her desire to induce other Danish folks to hike.  Her blog is written in Danish so a bit difficult for me to read.  When she was asked about her trail name she related that it stuck because…..well….she doesn’t exactly look Danish.  Actually it turns out that she was born in South Korea and was adopted at the age of 3 months by a Danish family. I liked her immediately…..she is at the 463 mile point after 2 1/2 months….she was emphatic..”I’m not quitting!”  I love tenacity. We spoke for quite awhile and I finally got on the trail at 10:45 knowing that I had a heck of a climb ahead of me in order to get out of Damascus.  This picture was taken after climbing over 1,000 feet of elevation.  The log caught my eye immediately…and then my body.  It had been the first serious climb since I had been back on the trail. 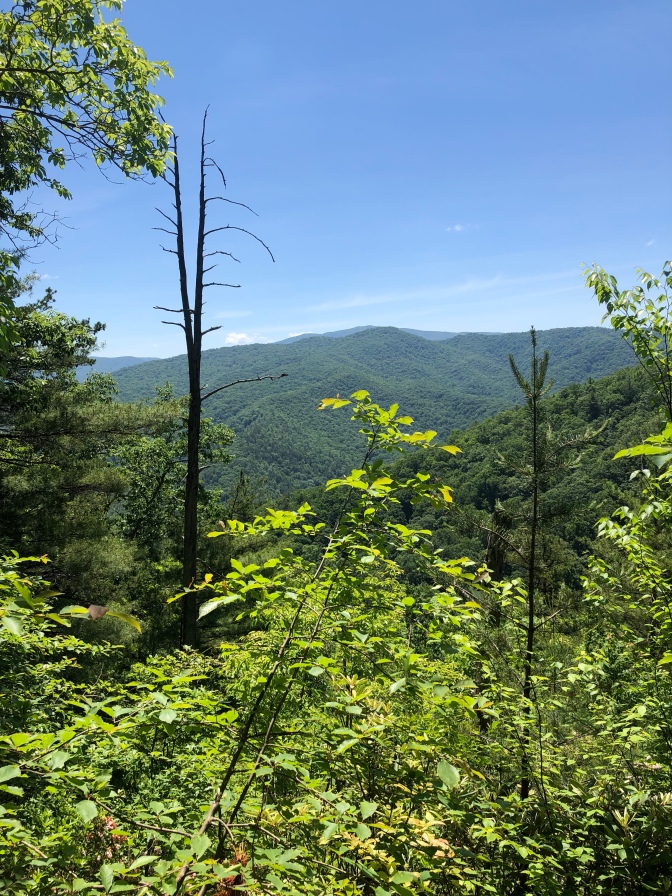 The Time Window is Closing

The trail is much quieter now. Gone are the numbers once hiking within the bubble.  I always hiked alone but the evenings were most of the time filled with the hikers bunching up at the camp sites.  OSO had been dealing with a stress fracture of his foot so he was lagging behind.  Both he and Danish had also begun this trek in March not long after me.  He had calculated that if he hiked 16 miles a day the rest of the way he would get to the end in Maine with 10 days to spare.  He was determined to do it. He left Damascus about 3 hours before me and planned to hike the Virginia Creeper Trail rather than the meandering AT.  The two trails joined in two places but the AT followed the mountain tops while the Creeper Trail (bike trail) ran along an old railroad bed.  He could pick up a mile and a half of decent gradual ascent by doing so. My purist blood wouldn’t let me do that.  I wanted about 12.25 miles on his day and it would include the mountain tops.  The plus was a few views like this.

The rain this year has been significant and the result is the loss of several hiking bridges do to the rising rivers.  This one next to VA 58 has just been rebuilt. It was at the five mile point of the day and I was already weary of being 100% focused on the possibility of the return of leg pain. Luckily there was a sign posted to distract me for a moment.  It informed hikers that the bear in the area had learned how to get our food out of bags hung in trees.  The next two shelters had been provided metal boxes with and electric fence in order to keep the critters away from our grub.

A Spot For Contemplation

It was time for some Spam…….and maybe even a dirt bar. I could hear Laurel Creek off to my right so I left the trail and soon crossed the Virginia Creeper Trail which ran right along the creek.  It was peaceful and seemed to be the perfect place to spend a moment figuring out how in the world I was going to be able to complete this journey.  It felt like I had spent more time off of the trail than on.  Then I realized….I had.  That thought didn’t lift me up in any way.  I wandered down to the creek in order to get some water.  Off to my left I found a hiker sitting there staring into the river as he sat on its shore.  Our hello’s were quiet.  He was deep in thought…..just as I was.  Once I got my water we spoke for a moment.  He was “Trailwalker” from New Jersey.  He also had to get off the trail for three weeks…it was difficult to get back on it.  Within moments I had gone back to my hidden spot on the bank of the river and soon saw him work his way back up to the Virginia Creeper Trail and turn northbound.

I wasn’t alone……it seemed that we were the tail end of the bubble and largely made up of those who had been injured or had emergencies at home.  One hiker had to leave because a tree had fallen on his house and he had to save his belongings. We were the group of 50% who had survived dropping off of the before Hot Springs but were in the lower 50% of the survivors.  Hopes of making it to Maine were fading fast.  I thought of No Name, Silver, Spoons, Sunshine, Kilo, Ghost, Tallboy, Database, Smalls, Huck, Ray, Buck, Robin, Honey Bear and countless others who were still treking way ahead of me into the Northern States.  I had to find a way to make this happen.

A Moment of Families Who Play Together Stay Together.

As I crossed the Virginia Creeper Trail after lunch I looked up the trail and found one of many families working their way down toward Damascus. This is one of the ultimate family times….one that just about anyone can do.  All downhill for 17 miles of gentle bike riding with plenty of river and countryside views.  Along the way a small restaurant and an old train depot now a museum and country store.  The Oconee County Hiking Club make sure that this is the first event we do each year when we travel to Grayson-Highlands State Park to hike. It’s even easy enough that this daughter can still text while riding…boo….bad. 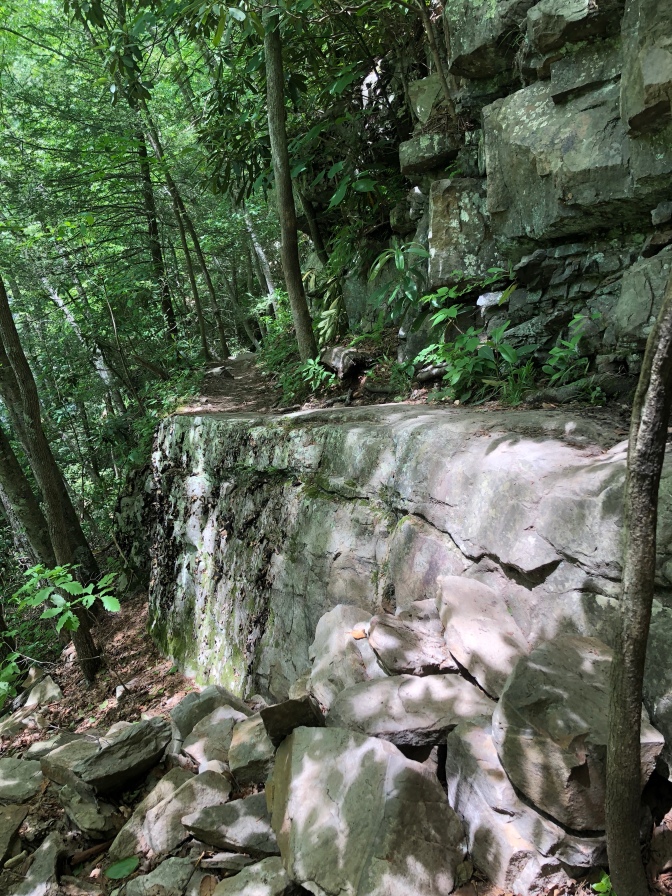 A Leg Test with Each Step

It didn’t take long to get back into the rocky trail once I left the river.  This is natural rock face…not built.  Once you get to the end you have to climb down the rocks that you can see to the right.  My brain was thinking legs.  My legs where thinking stupid brain. There was two significant mountains to climb before I would once again intersect the Virginia Creeper Trail.  Once I did I’d have my 12.25 miles for the day and I could seek out a spot to camp at.

The Final Trail Trestle Before The AT Left the Creeper Trail

I made it back to the Creeper Trail and began my search for a camp site.  Before I found one I had hiked 14.1 miles.  The end result was great though. I camped on the edge of a large stream.  The sun was down so I relaxed in the twilight as I cooked up some Ramen Noodles and chased them down with a cup of Tang.  It was the completion of three days of hiking with no sign of pain.  The act of sticking to the trail rather than hiking the Creeper Trail had resulted in no human contact once I began the hike other than Trailwalker.  After tomorrow’s hike I would be getting off of the trail in order to attend a surprise birthday party for Jan.  Tory and Rachel were coming to get me the next day.  This had been designed as a four day test.  Since the legs were doing well I had hopes of joining Huck and Ray in Maryland to hike the rest of the way to Maine with them thus beating the snows of fall up there.  I could then drop back down to Virginia to finish the entire trail within this year. That was the plan of the moment but I wouldn’t be able to do that if I didn’t “hike on.”