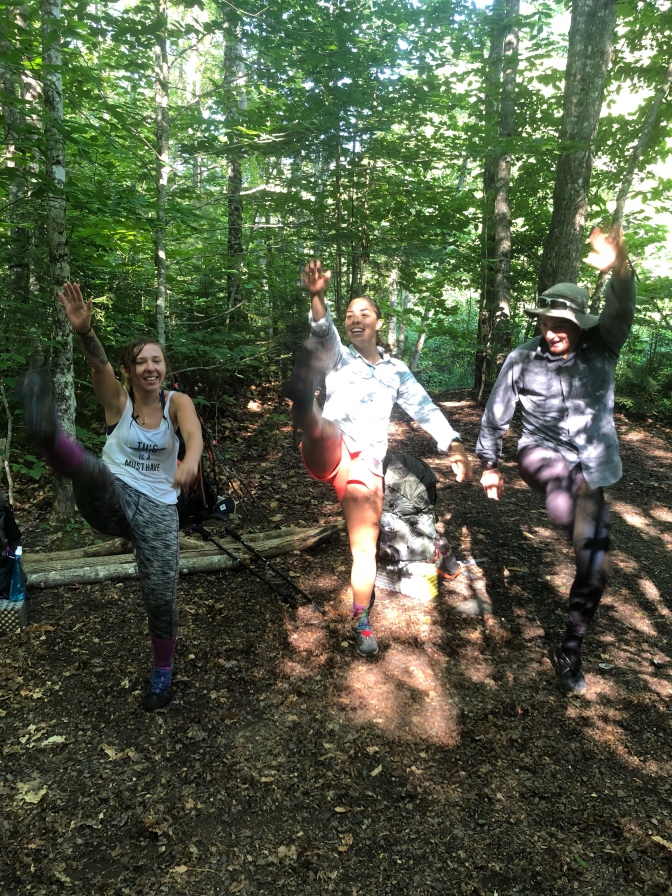 Every Day Should Begin With Rockettes Routine

A normal day on the trail begins with a stretching routine. After all…….you are about to subject your legs to multiple hours of misery. Here Amie, Allison and Alex do what I can’t do. 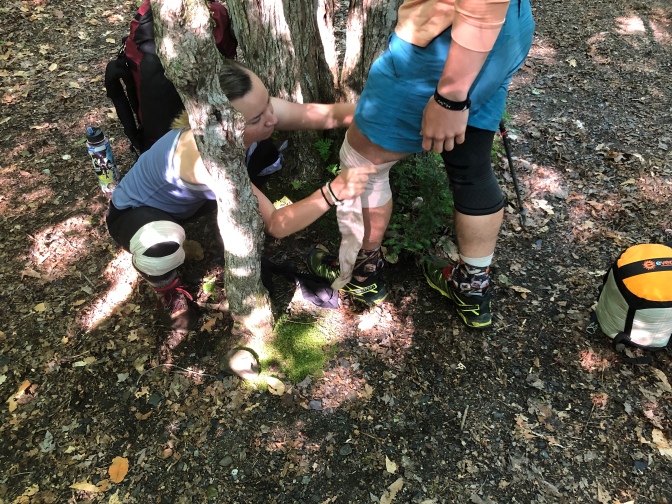 For Those Not Quite So Limber

Its time to bandage knees. Jed spent a goodly amount of time sewing Mouths pants back together and bandaging Mouth’s blisters as I taped a sprained ankle for him. As a result Jed and Mouth were the last out of camp. I was solo before them. Fallon and Zak were the second ones out. Alex, Allison, and Amie, as is the norm, were first out. That order would make a difference later in the day. 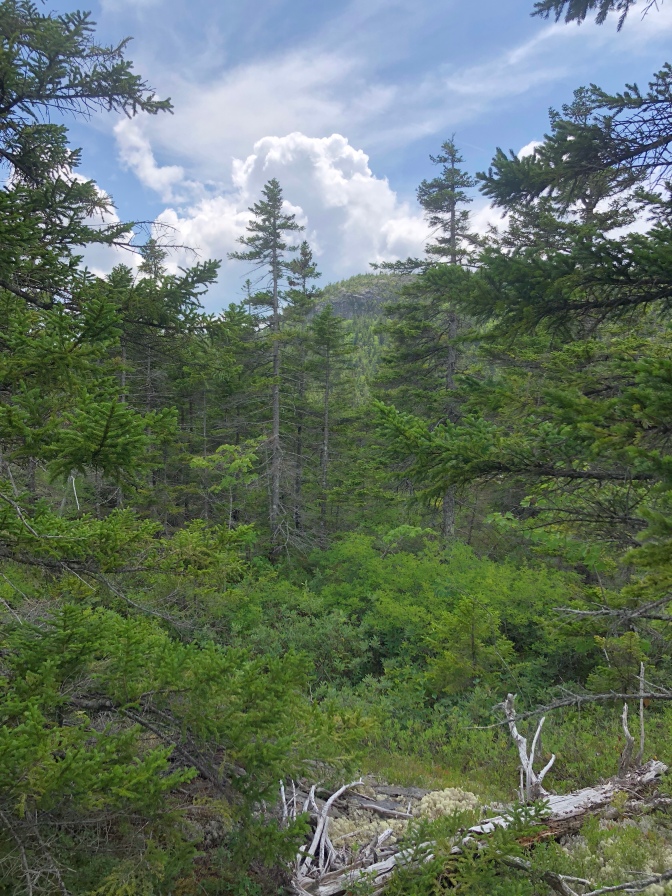 The Climb Up Chairback Mountain

Yes…. I know…. multiple difficult climbs up rocky mountains are redundant but that has been what this hike has been all about. It gets where you are hesitant about looking up because you know what you are going to see. 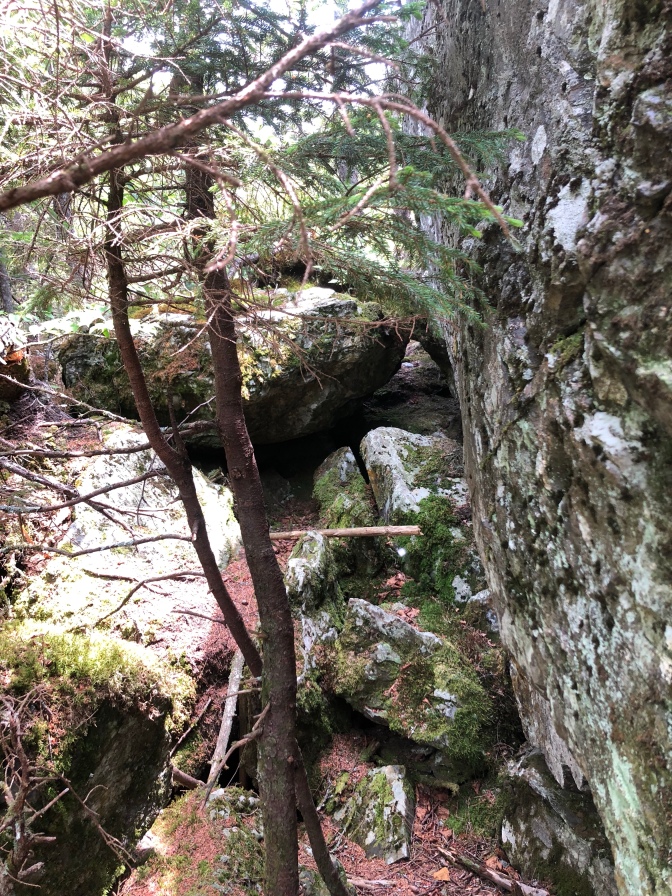 Where toe holes to stick your feet in are few and far between. If your normal step up is 2 feet you will need 3; if it’s 3 you will need 4. It’s always wanting more. 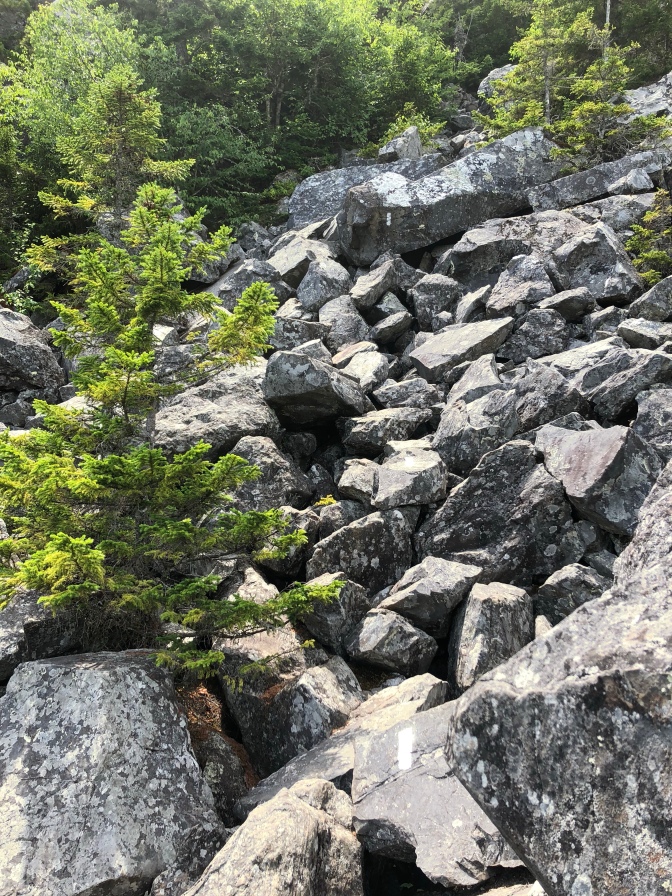 Because Just Ahead There Will Be a Rock Slide

As was the case this time with a rock slide before the summit of Chairback Mountain. This was a wide expanse of rocks that extended as high as it was wide. The trail was so nondescript here a sign had to be placed in the rocks to let you know where the trail was. I would have hated to have hiked this when the rocks were slick with rain. 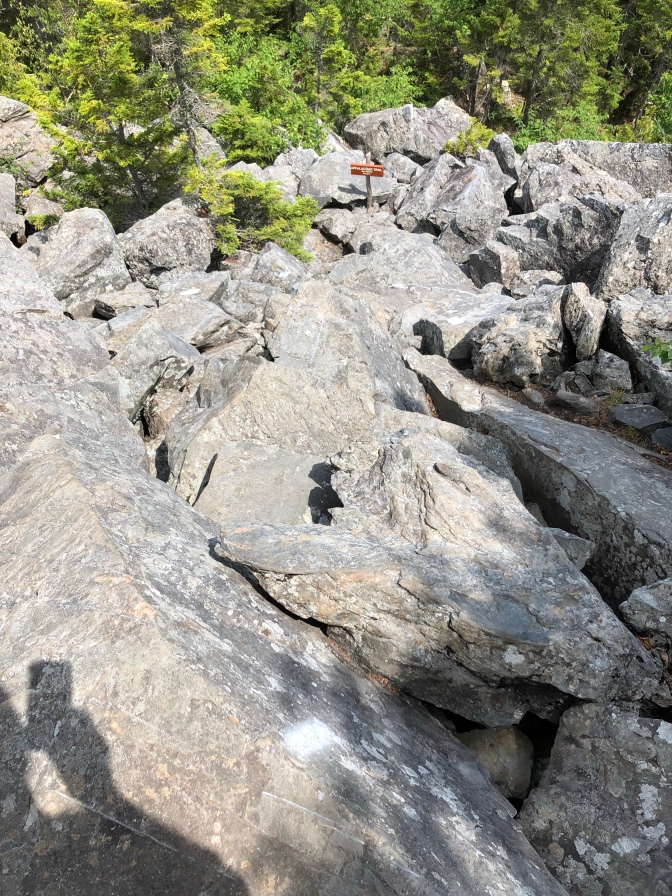 Looking closely you can see a white paint slash on a rock high and the sign low. At this point I was 4.2 miles into the hike and had stopped several times hoping that Jed and Mouth could catch up. I did not know that Zak and Fallon were doing the same thing for me. 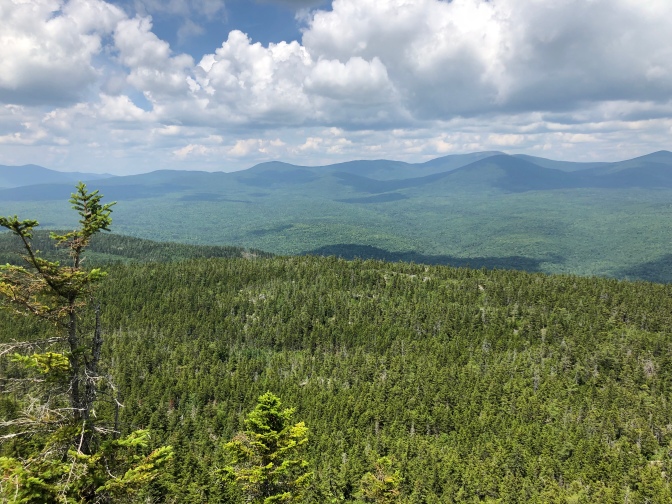 As usual the view from Chairback Mountain was worth it.

What I did not know was that Mouth told Jed that he could go no further and he wanted off of the trail. He felt that his injuries were too serious to continue. Mouth is 18 and Jed felt that if it had been one of his children he would have wanted someone with them. He left the trail with Mouth and we would not see him again until Monson three days later. 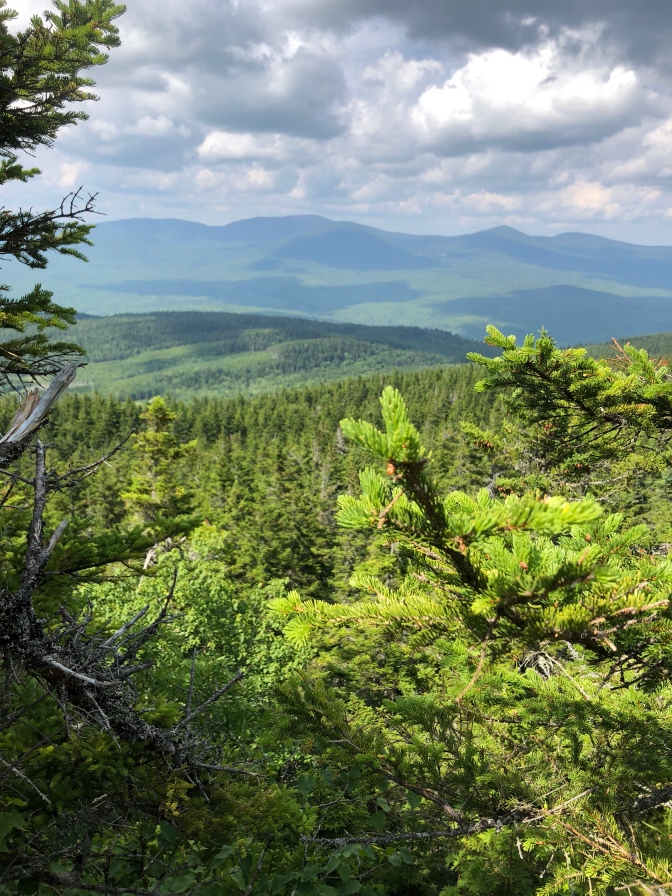 I finally had to move on. I was carrying someone else’s heavier tent and I could not afford to let them be without it. Rain was coming in that night. And yet……… Mouth may need my medical help. I mentally flipped a coin and then I opted to get the tent to its rightful owner. It turned out to be the right decision, 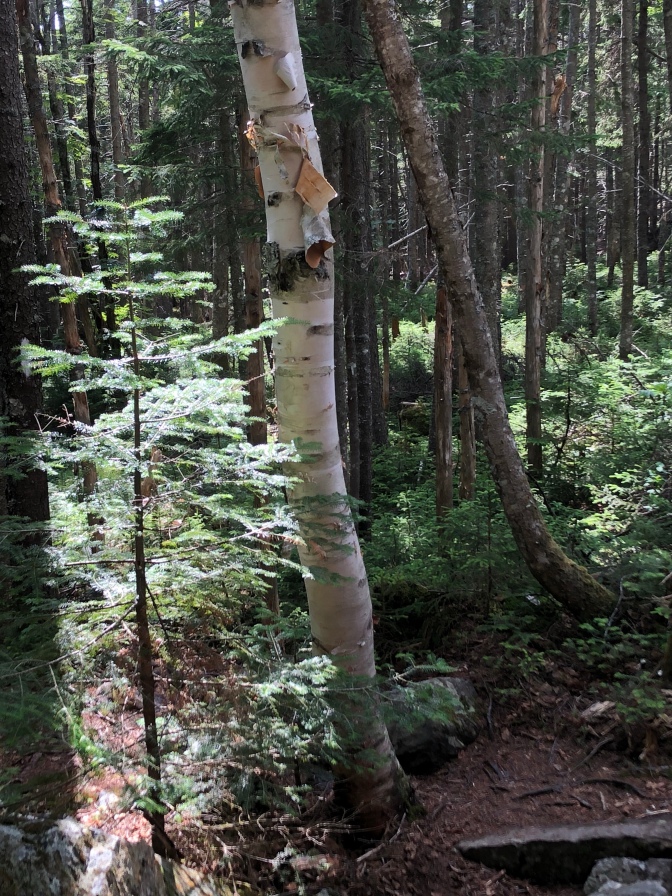 I remember as a child loving white birches. I also remember being concerned for them. Even back in the 1950’s it seemed that most of them were lying dead on the ground. Today we deal with a similar problem with a dogwood blight in the South.

Yet today in 2018 60 + years later there are still white birches falling to the ground and plenty of them still standing. This one really caught my eye. I often wondered if Indians once used the bark to line their canoes. 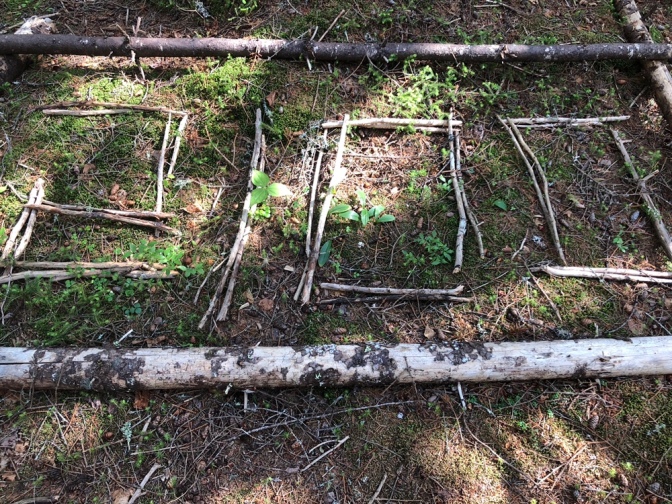 The fact that we have flipped has brought about the loss of orientation to NOBO mileage. In spite of that on Third Mountain we came upon NOBO mile 2,100 which corresponded with SOBO mile 90. That was a bit disconcerting but in the end all of the miles count and they all add up to 2,190. 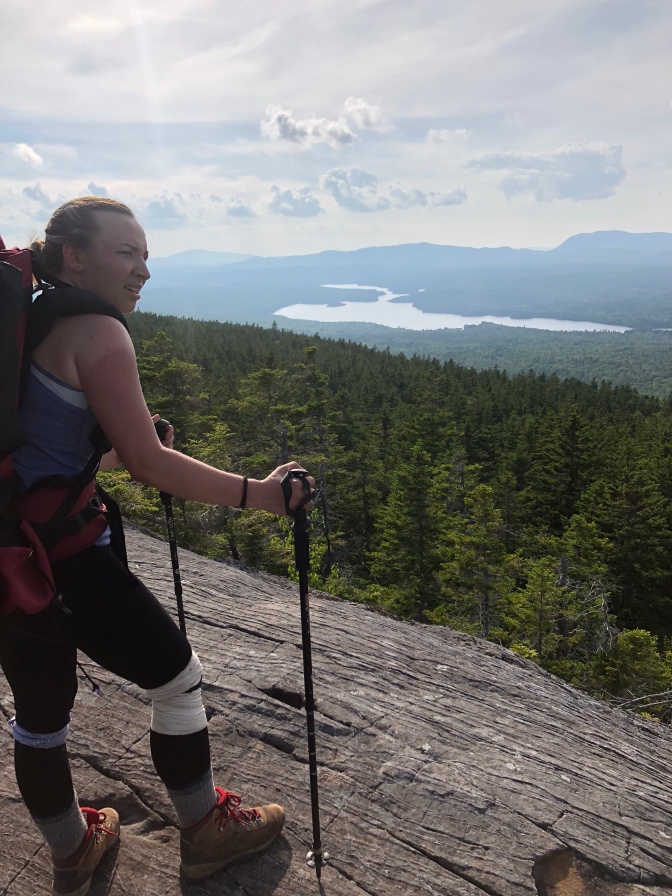 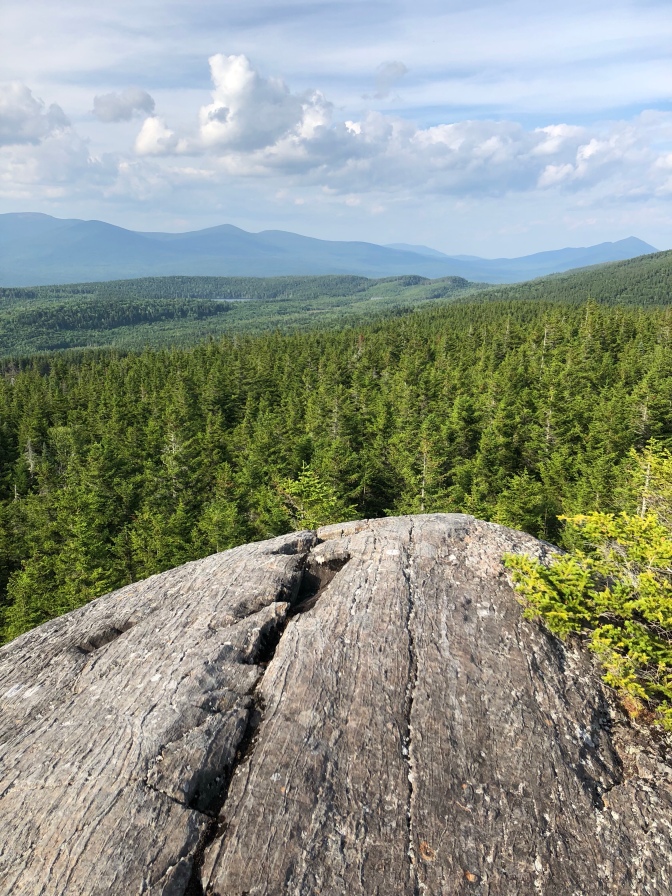 Mountain Three and a Half

Evidently there is not much effort by Mainers to name their mountains. In this case there were several peaks that were named chronologically and in the case of the short one it became a half.

I had been hiking solo all day by this time. I had a moment of weak signal on Chairback Mountain which was enough to receive a text from Jed that Mouth was getting off of the trail and that he was going to assure contact and a safe ride back to Washington D.C. before finding us again. 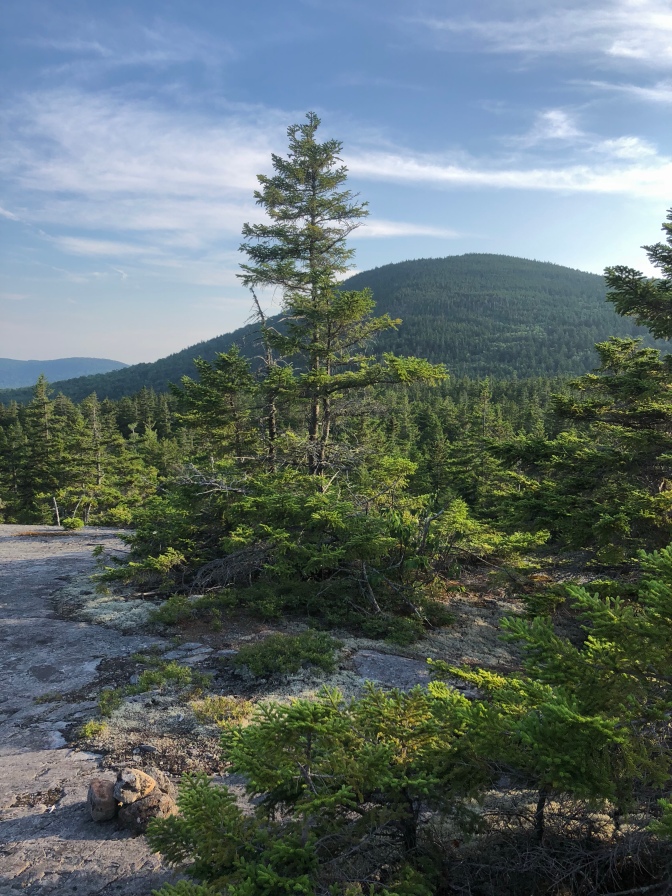 A Look Back Toward Three and a Half Mountain

That released me to make an attempt to catch the others and trade tents. It was hopeless. They were too fast for me. About 6:30 p.m I reached a branch flowing down the mountain toward West Chairback Pond on my right. As usual the crossing was a collection of huge boulders. As I was working my way across the stream Zak suddenly popped up and called out, “Defib!” He and Fallon had stopped to wait for me awhile and the warm sun had made them drowsy. They both promptly fell to sleep on the rock and woke up just as I was arriving. I can tell you that I was more than glad to see them. It was getting late and we had several miles to go. We would be night hiking on this evening. 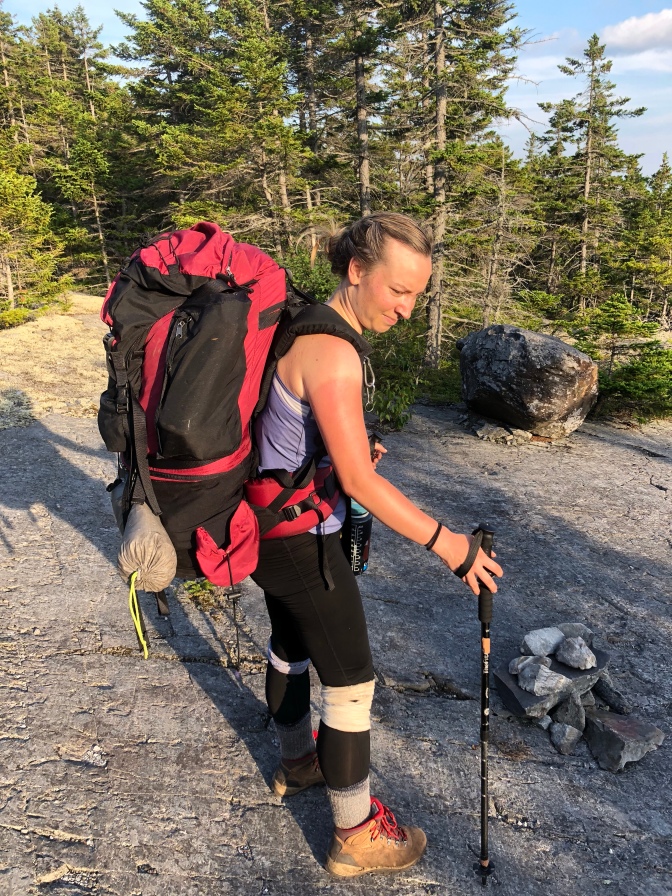 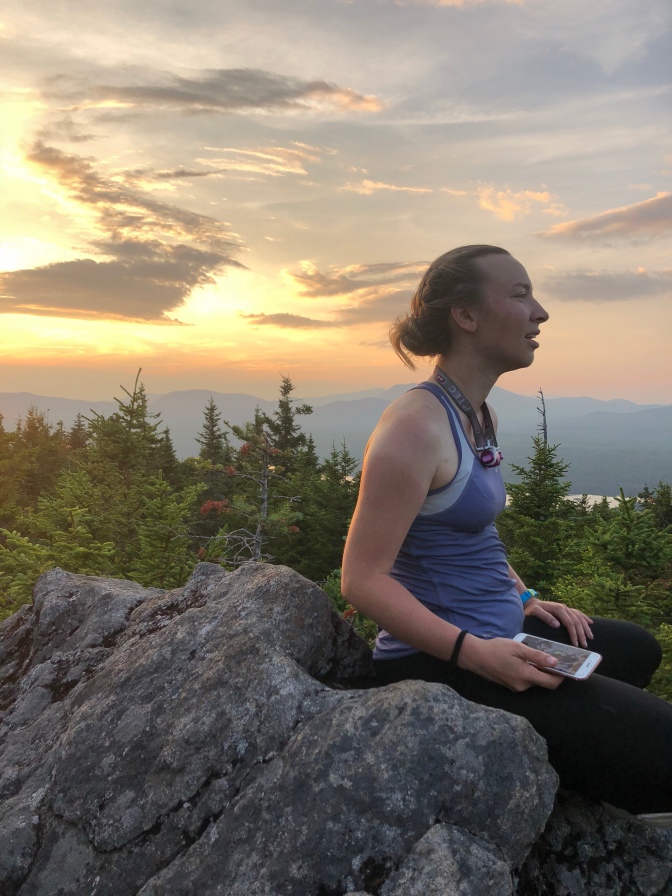 By 8:03 p.m. we had reached the peak of Fourth Mountain. Our camp sight was still two miles away and that would take some time to hike in this terrain.

In spite of that we could not pass this moment by. It was time for sunset and we were in the perfect place to witness it. I’m posting the video on Facebook. It would be well worth the night hiking….. even in this terrain. 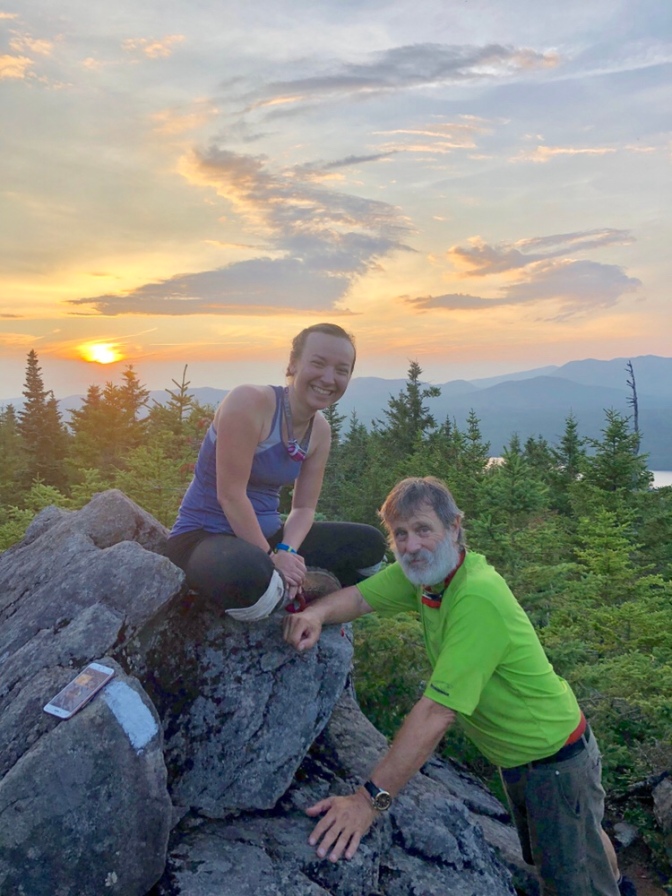 Zak, Fallon and I stayed with the sunset until it had nothing left to give. We then placed our headlamps on, adjusted the lights and moved on toward Cloud Pond Lean-to. Two hours later we stumbled into camp on a mountain top lake. We gathered our evening water after chasing off multiple frogs who were claiming the same space.

It was impossible to find Amie who had my tent. The small camp area was packed with tents all of which had sleeping tenants. I finally threw out my ground cover and sleeping bag and cowboy camped. The best sleeping night yet………. until the rain began.