I can only describe the first day on the Foothills Trail as a disappointment.  While I was certainly excited about having the chance to hike with Whitney I felt terrible.  It was more the anger I felt in allowing my love of Yankee meatloaf and potatoes overrule my desire to stay fit.  I paid for that weakness on the first day.  To be honest on that first five miles I felt that there was no way I was going to finish this hike.

In spite of that both of us awoke on the second morning refreshed.  Well….I was…Whitney said she didn’t sleep much.  Weird noises and cries and hooting and such.  It poured for a great portion of the night which actually made it easier for me to sleep well.

The end result was that our tents and ground covers were soaked the next morning. Rolling up our ground cover actually took about as much of the forest with us as we left behind.  When the rain began during the night I made a wild dash to grab our packs which we had left under a sheltered rock.  The strength of the rain told me it wouldn’t be enough protection.  The dash paid off…….darkness, trees and no hiking sticks are now the enemies of my imbalance.  I managed to make the run without kissing the tree or drunkenly falling over….maybe I could do this hike…..if I could just work off these dreaded carbs. We did not hurry in the A.M.  I heated water for Whitney so she could have oatmeal…..that was the last oatmeal she ate on this hike.  I believe they have become her dirt bars.  By 0900 we were on the trail.

We used up all of our water so it was time to resupply.  About 30 minutes after leaving camp we came upon a small stream with crystal clear water.  A few moments later we were ready to go. 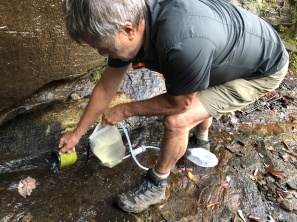 The act of retrieving water is more about not falling on your face while you are attempting to gather the water.  Normally you are standing on slick rocks and the fact that it had been raining all night made the footing all the more tentative. 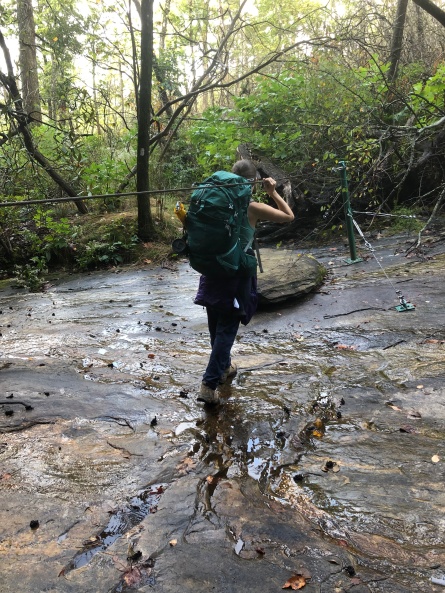 We have had so little rainfall over the last month that this has become an easy crossing. The fact that they felt the need to establish a guy wire to hold onto says it all.

Whitney was moving well and I soon found myself well behind her.  She made sure to remain within shouting distance but I found it difficult to keep my balance working my way down steps imbedded between boulders and sides of embankments.

I had quietly told Whitney before reaching the top of Sassafras that I may not be able to go further.  I honestly don’t know why I changed my mind.  Even the climb up the concrete walkway to the observation summit was work.  There were several families up there viewing the skyline….that brought about a hiking norm…….you don’t ever let the others see you staggering. Suddenly your shortness of breath disappears….you stand taller…you smile…you catch your breath enough to share a greeting. 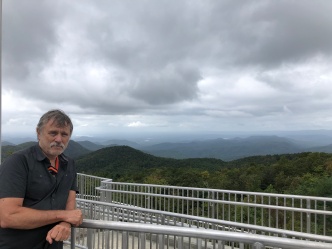 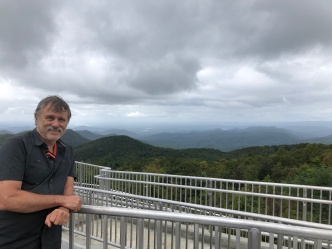 So here is how it works.

First Picture:  “I can’t make it any further.  My dogs are dead. If I take one more step I will collapse never to walk again.” 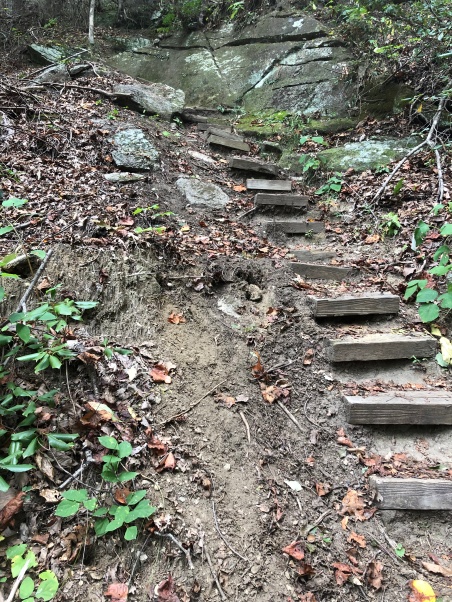 And so….you are faced with a difficult option.  First face says, “Don’t go on!”  Second face, “Fake it and go!”  And then you realize that you really haven’t tested yourself yet. You are dealing with Yankee meatloaf and potatoes.  If you walk away you won’t know how much you could push it. So you decide to hike.  Within moments you are faced with steps like these and you wonder about your ability to make intelligent decisions.

On the other side of these steps we came upon a hiking club from somewhere.  On the side of the trail sat a smiling woman of the group sitting with several others fussing over her.  I asked if she was “OK”.  “Yes, she’s fine” a woman answered immediately.  I hiked on and soon ran into a rescue team working it’s way up the mountain.   “Hey Wayne!  What are you go doing out here?”  I knew them.  They were on the way to retrieve the “Yes, she’s fine”.  Hmmmmmm. 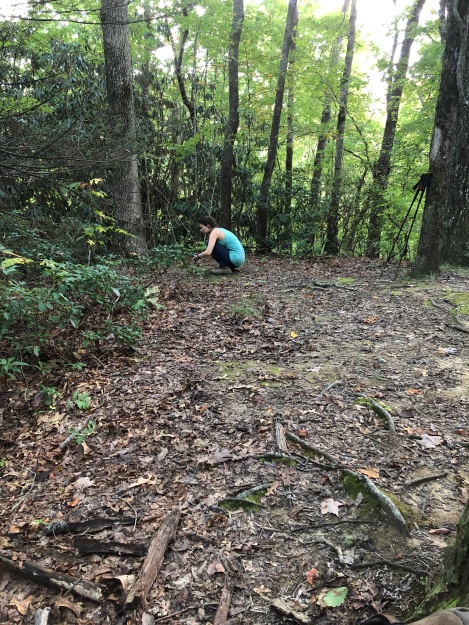 Ten miles was all we could manage on this day.  Sassafras and the 4 1/2 mile descent had taken it’s toll.  We resupplied water at Rocky Bottom then climbed to Laurel Fork Falls Parking lot.  Another climb of steps and about 0.7 more miles and we were done.  I called out to Whitney telling her to find the next spot big enough to put two tents….”please stop”…. this was it…”I’m moving all of the sticks on the ground tonight”, she said. Once in the tent it didn’t take long…. I was fast asleep. The decision of whether to move on into the Jocassee Gorges would be made in the morning.