The rain subsided sometime during the night.  I felt refreshed.  I even managed to somewhat bound out of my tent without wiping out on tent lines, trees or any other of the assorted impediments located in the campsite.  I wandered to the edge of Lake Jocassee .  It was down….more than likely feeding Lake Keowee and Lake Hartwell at lower levels.  Lots of people live on those lakes….this one….few.  If they are going to have low lake levels it will be this one.  Whitney and I had talked tent to tent during the night.  We were going to attempt to make it to the Thompson River almost 14 miles away with one too many climbs between our point of beginning and our destination. 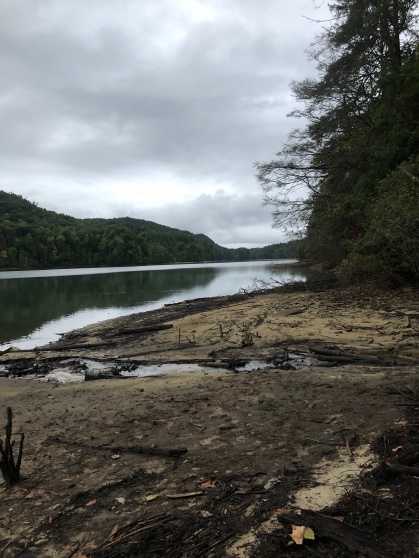 One of the best ways to get a head start on the day is to eat breakfast on “the go.”  This is how you do it.  You reach into your pack and snag a “dirt bar” and tear it from its wrapper.  Next you do all of this in a standing position to give the illusion of making progress as you stand there.  It is important to make believe that these things taste good in order to give you the willpower to climb the next inevitable hill.  Whitney has the system down pat and I believe that the trick is the cross legged stance that allows her to exude an appearance of carefree joy.  I, on the other hand, could be found also in a standing position but with my head bent well forward and pointed down in an attempt to avoid upchucking on my hiking boots because of the gruesome taste and texture of the normal dirt bar.

We were along the edge of the lake and the terrain was great……but…..the book said that would not last.  The norm is….cross a creek or water of any size…climb….walk along a lake…..climb….in this State Park “climb seems to be the norm.  And so we climbed up several old road beds and steps that were more dangerous than helpful.

I had done this section of the hike before with Cindy Hanson, Ron Aubert, Joe Gavalda and Tally Grant.  It was a section that left me wondering why this area was selected as a natural wonder.  Duke (or someone) had cut the timber and there was this huge transmission line running through it. This totally left the tract with an impression nowhere close to being a wilderness.  I was, in fact, feeling better.  My legs were already rallying and I had at least gotten rid of the “C” in Carbs and was working on the “ARBS”.

Arriving at the intersection of the Auger Hole Trail was significant.  It meant that most of the ugly hiking was behind us. There was only 42.4 miles to go. Looks like I need a comb….but….nahhhhh. 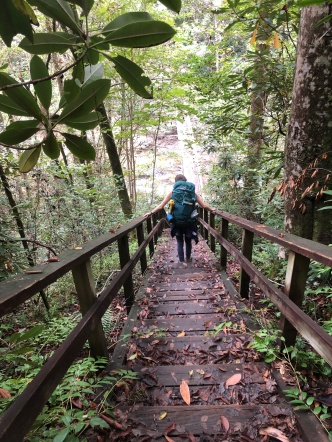 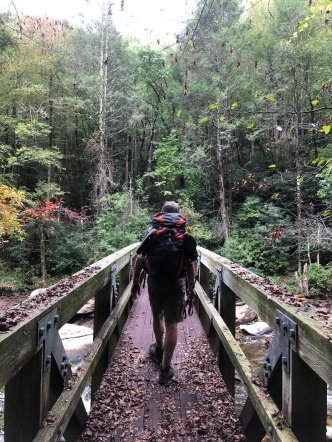 We had reached another milestone….Horsepasture River. It came complete with a massive staircase down to the river designed to inflict agony on Whitney’s blistered feet.  Up river were two waterfalls that we have all visited on multiple occasions…Rainbow and (I think) Turtleback Falls..both within the Gorges State Park. 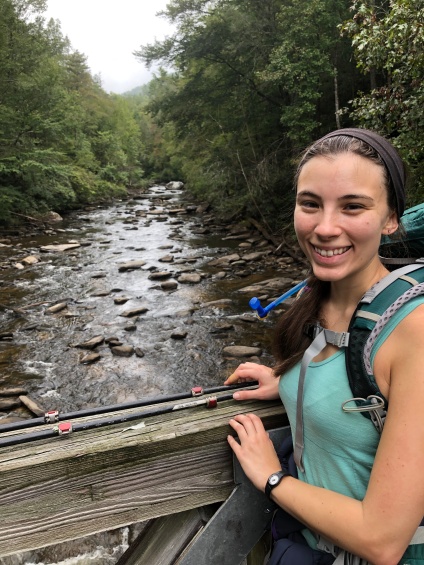 The trooper is still smiling as she stands on the bridge across Horsepasture River. 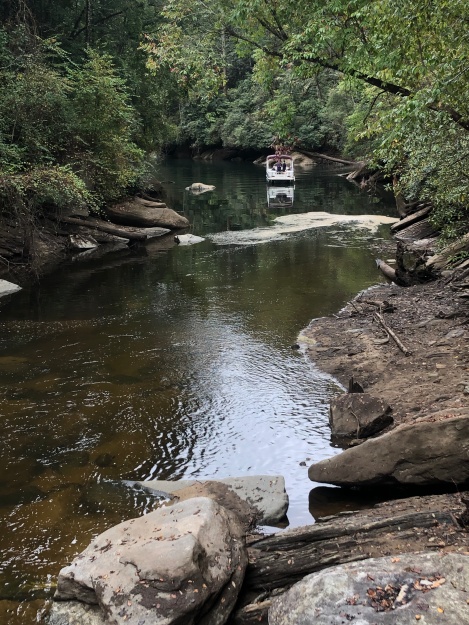 From our left coming slowly up river we saw a tourist pontoon.  They worked their way up river slowly from the lake in order to see the bridge.  I hiked on…..I heard Whitney say, “I’d give anything to be on that boat”.  I can’t say that I didn’t agree with her but by that time I was well into “I’m going to finish this thing.” mode.  I didn’t care how many more hills there were…..it was down to one foot in front of the other.

It was time for an ultra delicious lunch treat.  On the other side of the bridge was a small flat area that we chose to have lunch.  It was time for Whitney to redress her feet so as she did that I broke out a package of SPAM and a soft tortilla.  I sliced the SPAM and strategically placed it in the tortilla.  A bit of rolling later and I was in SPAM heaven.  As I ate I noticed that there were several dozen yellow jackets flying around me.  They were not landing on me and they seemed to have absolutely no interest in my SPAM.  If they had we would have had a fight on our hands.  You don’t mess with a hiker’s SPAM.  I began to wonder if I had set my pack on their nest.  Once I picked it up there it was….a large circular hole with dozens of jackets flying in and out.  I moved my pack over by Whitney about 10 feet away.  Not once did they attack us.  They must have been on another mission and didn’t have time for us.

Yup…that’s right.  We were at Horsepasture River so it was time to climb again.  More roads up…more trails up….more steps up…  Whitney and I shared leading back and forth.  It was unspoken…each took the lead when they felt better than the other.  We began to run into hikers coming the other way. 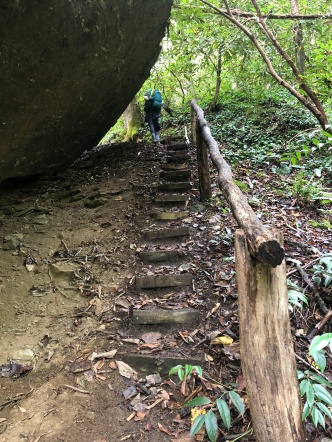 Billy Goat was first…..a hiker from Beaufort, South Carolina hiking solo.  I ran into him first and we spoke.  When we realized that we were fellow AT hikers the fist bumping began.  There is a bond between AT hikers.  I still hear from several that I shared the trail with.  They will always be part of my life now.  As soon as Whitney came around the corner Billy Goat got excited and asked if we were a father/daughter team.  Yes was the correct answer for him so he proceeded to tell us about the fact that his daughter had joined him to hike the final two weeks of the Appalachian Trail.  They enjoyed it so much they traveled West and hiked the John Muir trail together.  He related that it was the best time of his life.  Like I said in an earlier post….sometimes it’s not about where you are hiking but who you are hiking with. When he heard of Whitney’s blisters he took the time to get out new tape and cut off a section for her.  We moved on wishing each other the normal “luck” for the miles ahead.

Not too long after Billy Goat we came upon David from Charleston, South Carolina.  He was apologetic saying that he had been hiking very slowly.  He had started the day before us so he wasn’t that much slower than us.  I minimized our agony….he was a super nice guy and we both let him know that it was difficult ahead but we felt that he would surely make it.  He lingered seemingly not wanting to break contact but it was time.  Whitney and I wanted to make it to the Thompson River.  Just after David we reached the half way point.  Only half way….goodness surely we had to be 90% of the way there.

After you have seen one too many forks in the trail you begin to wonder…evidently others had felt the same.  In this case someone had decided that it was time to provide an extra guide as to which way to go along with the white paint slash.

The Thompson River was now within reach.  We were planning on camping on its banks.  Along the way was another site but there was still daylight. We had opted to make it to the river.  We passed a group of five hiking to the site we had passed.  Four of them were literally conquering the trail through determination because I don’t believe that any of them had ever worked out.  I saw their mouths move when they greeted us but no words came out.  Good for them…they were tackling the trail. They had a young girl of about ten with them who was bouncing around and spinning in circles with her 5 pound pack on.  There had to be at least one of them who wanted to swat her like a fly.

Arriving at camp was happiness.  We had hiked 13.8 miles which meant that each day we had hiked a bit further.  On the down side Whitney told me that she would be getting off the trail the next day.  It was only 6 miles to SC 130/NC 281.  That is where Pam and Joe had brought my truck with our resupply of food.  I agreed…Whitney needed to get off the trail.  We had been having a great four days together but there was no reason to totally destroy her feet.  She had a hospital with a steady stream of newborns to take care of….by tomorrow afternoon I would be hiking solo.  She had more than shown me her stature.  If Whitney was a John Wayne movie she would be True Grit.  Hike on!!!!