It was good to be able to set up camp a little early at Sloan Bridge.  I hiked just beyond the picnic area and found a spot tucked away within an abundance of rhododendrons.  It was a little bit too close to Highway 107 for my liking but I couldn’t remember another site further without having to tack on another couple of miles.  Dinner was cooked up in a few minutes and I found myself able to crawl into the tent about 8 P.M. for a long nights sleep.

By that time the sounds of vehicles traveling home had died down leaving only an occasional passer by.  About 10 P.M. the sound of a slamming door awoke me.  And then another.  A vehicle had pulled into the picnic area.  I couldn’t see them but I soon could hear them.  A woman began by asking her dog to do his business.  Evidently the dog was non compliant.  Soon there was absolute all out screaming.  The demands echoed through the valley.  The poor dog was called every name in the book. It brought my mind back to the woman on the AT who had verbally lashed out at me in Virginia about being on the phone with my mother.  Do you remember?  The one who had the two beautiful dogs that I wanted to find a better home for?  I felt badly for this dog at Sloan Bridge.  The screaming was so loud and so angry I’m sure that the dog was too overwhelmed to perform.  I thought about getting up to save the dog but the ground was so comfortable and I’d grown lazy for the night.  I don’t know what the final outcome was but the force in which the doors closed said that it didn’t end well.  She was soon gone and peace returned. 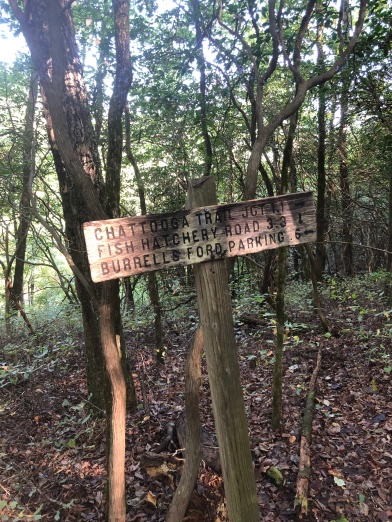 I had calculated in my mind my options.  I was now on very familiar ground and only 23.7 miles from the end of the trail.  I had three days to complete it but I was feeling pretty good. Besides…..Clemson was playing Florida State the next day and there was a chance that I could get a ticket.  Maybe I could do the entire thing.  If I couldn’t surely I could cut it down to two days.  By 07:58 I was on the trail.  The first section was to the Fish Hatchery Road.  The guide to the trail said an estimated 2 hours hike time…I did it in 1 1/2. Maybe I could see the game.  The problem was I had never hiked 23.7 miles with a full pack on before….even on the AT.  At the Fish Hatchery Road I caught up with two hikers from Charleston (evidently everyone from Charleston was hiking the trail) who were taking a break. We talked for 7 minutes and I moved on.  It was 3.9 miles more to Burrell’s Ford.  Again it was estimated as a 2 hour hike and I did it in 1 1/2 hours. Maybe I could say “1…2..3…4; 1…2…3…4…C…L…E…M…S…O…N…T…I…G…E…R…S….” tomorrow after all.  It was only 16.5 miles to go.

The trail was good….only a few obstacles and they were not that bad.  An occasional maneuver around a few rocks..the normal ups and downs.  The trail was leading down to the Chattooga River.  I began to get that feeling that I had been told about before…when riders are out riding their horses…the horses will speed up when they sense that they are near the barn.  I have no idea if that is true but I decided to apply it to myself.  It was not going to hurt to be a horse just this one time in order to watch the Clemson game.

By this time I was an hour ahead of schedule.  At this rate I might be able to finish the 23.7 miles by about 8:30 that evening.  I’d be under head lamp but that would be OK.  I had arrived at the Chattooga River.  As a matter of fact the first place that I took a short break was where Flo had become my travel companion rather than just a well worn toothbrush.

It was here that I decided to bring her everywhere that I went.  She became my constant  companion and for quite a long time it was great. But then…as most good things seem to evolve…the moment of fame for her began to go to her head.  I found her seeking out more exposure.  It was all about her….. When she was recognized by a couple from Kentucky at a waterfall in Dupont State Park I knew that she was out of control.  I think that my housekeeper may have tossed her simply because, although addicted to the fame, she allowed herself to become rather unkempt.

By the time I reached the intersection of Big Bend Trail I realized that my pace had slowed a bit.  I was feeling the weight and I was not halfway there yet.  Suddenly, as I was about to take a large turn in the trail, I hiked right into Joe and Pam.  What in the world??????  They had decided to hike that day and perhaps run into me!  It was great to see them.  We hiked on catching up with each other about the hike.  They soon stopped for lunch and I kept going knowing that they would catch up with me quickly.

Hiking has certainly provided me with some great friends.  The times spent together have been positive especially when you consider that we all share the same interests.  I find that hikers are for the most part extremely positive individuals who love the outdoors and enjoy sharing it with others.

The haul up to SC 107 is my least liked section of the Foothills Trail.  Fire swept through the area several years ago and it still has the scars of that event.  In spite of that I made it to 107 at 5:40 P.M.  I was wasted.  I had hiked 17.7 miles and had 6 to go.  The hike to the State Park was not difficult but it was ……well…another 6 miles. Jan and I had hiked it with full packs back in my rehab days when P.R. Johnson was helping me with a back problem.  That had not gone so well.  I was going to make this one better.

I’ve found that as I’ve grown older I’ve become even more persistent about doing things a certain way…a certain order…leaving nothing out..not missing one foot of the trail.  That at times presents a problem…I can no longer leave a grocery store without organizing the shopping carts that folk haphazardly push into the collection points.  At least most try to get them into the enclosure.  However, more than one can be found rolling down hill toward a parked car.  To make matters worse they now make the carts in three sizes.  See?  I need to stay on these trails in order to get a break from shopping cart duty.

I reached Whitney by phone…she had promised to pick me up when I got off of the trail…on Saturday….or Sunday…but this was Friday.  Luckily she was available.  The last two or three miles were with my head lamp on.  A few stumbles…a few staggers…a few thoughts of surely the end was near.  I could not see my normal landmarks in the dark.  Hiking with vertigo and a head lamp proved to be a challenge.  But at 8:23 I saw headlights….the end was in sight.

I exited the trail and made my way to Whitney.  She looked so very good.  I went up to her and hugged her…well….I tried to…..”Ohhh dad…you stink!”  I managed to get a 0.5 second sideways hug as she was falling away from me.  If I’d known I would have found a creek to jump into to.  No really…I knew…I was grossing myself out…..my washing machine was going to get a workout. 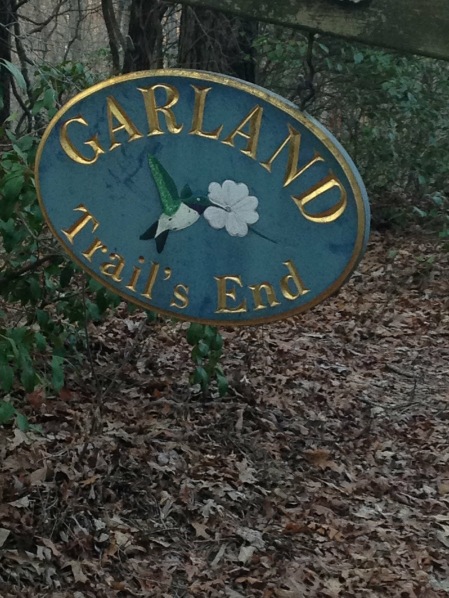 The hike was complete…76.4 miles…. 6 days.  Not a world record for sure.  The book says 5-10 days.  But I know several who have done it in 4 or 5.  Just before I began someone had run it in 19 hours.  What!!!!  It’s a perfect hike….forest…wilderness…rivers…mountains…a lake….rocks…stairs…great camping….rain….frightened dog….Twizzlers….and most of all a beautiful daughter…even if she thinks I stink.