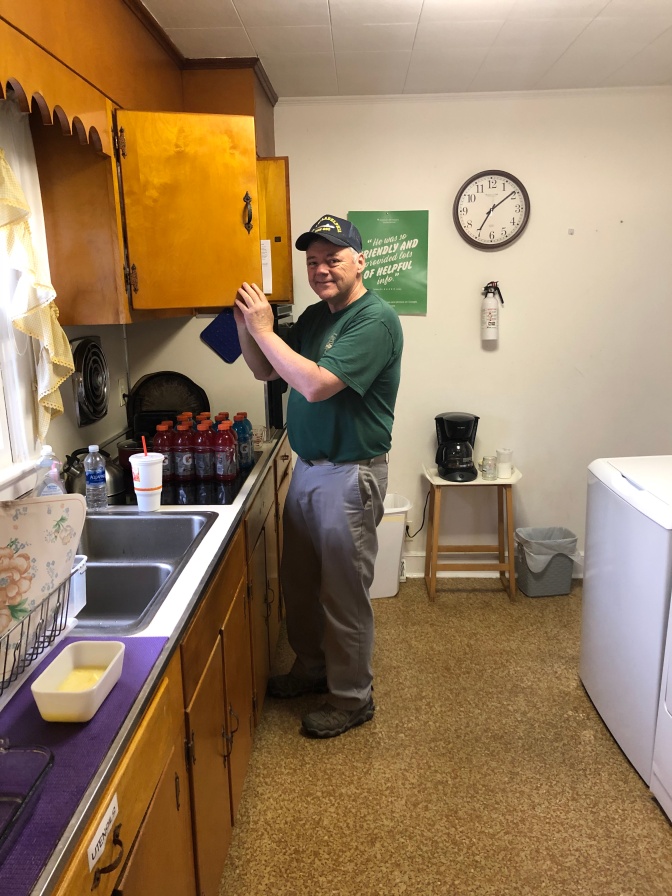 Rain was in the area for Sunday so I decided to cool my jets for the day. It was not difficult to make that decision . Breakfast, laundry, a vibrating chair, charging station, Dollar General, restaurant and most of all manager Charlie made it an easy choice. Charlie is a 2019 through hiker whose trail name is Pilgrim. It was ordained that be his trail name: He was born in Massachusetts and when he got his ATC hiking tag for the hike he got # 1620. He cooked breakfast each morning , drove everyone everywhere and kept everyone entertained.

Farmer had been moving up on me for several days and he arrived at the hostel about 7 hours after me. He also began his through hike in Georgia on February 1st. He owns a 1,200 acre farm in Indiana and raises grain. He’ll be taking a 5-6 week break in a few weeks for the years planting but will be definitely one of those who finishes the trail. 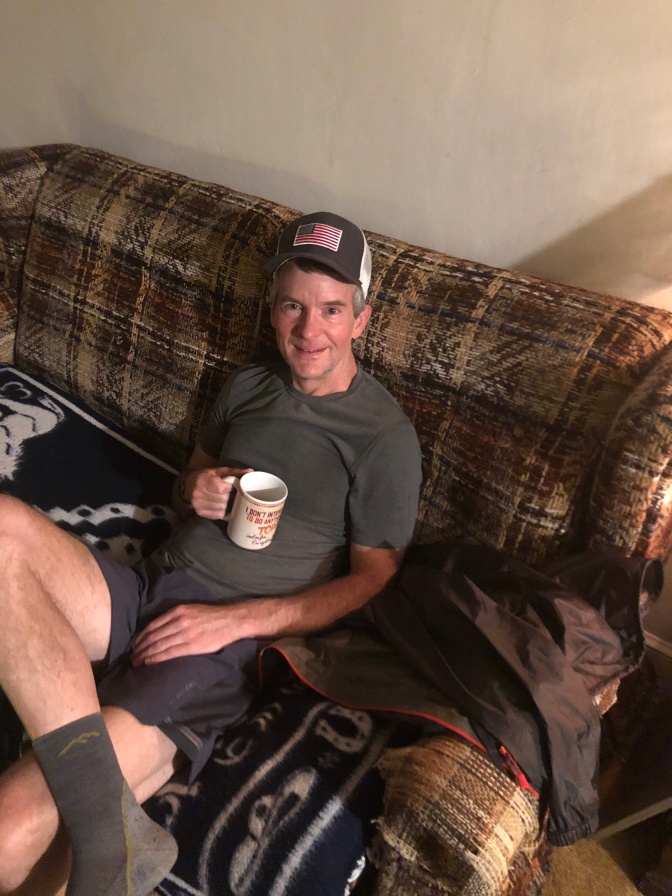 Justin never divulged his career although Farmer spent a goodly amount of time trying to dig it out of him. He didn’t even actually tell us how much hiking he was doing. He is a 20 + a day hiker and extremely knowledgeable. My guess was lawyer, engineer, architect or career criminal.

The restaurant had the best of everything and that included the friendliest staff on the planet. It included a room named Hikers Den where they could place odiferous hikers away from their regular customers.

I had mixed feelings about losing a day out here. Physically I was fine but I found myself wrestling with the weather situation which included lightning storms. Many of you have written, “Be safe, find shelter” but the truth of the matter is that there is no shelter out there other than the hiking shelters which are many miles apart. Most of the time there are mountains between you and those havens.

I know that there are going to be many days that I will be out in that weather with no options. It really didn’t make any sense to me to go out when I had a perfectly good roof over my head…… besides….. food…dry…. a chance to catch up on the stories……. But Monday morning I’m back at it again with a 77 mile jaunt toward Waynesboro, Virginia.

By the way Action, Adventure and Solange arrived yesterday afternoon. We had supper last night to much laughter. Solange will be leaving the trail to return home and Action/Adventure will be taking a zero today and then getting back on the trail. If any of you would like to check them out you can search “Action and Adventure on the Appalachian Trail” on Facebook and hit follow.

Time to finish this coffee and hit the trail. The warning is poor cell service for five days…. at least where you can camp. Obviously I can find good service on the mountains while I’m hiking but that isn’t exactly the best time to sit down and write a story.