The morning of the 5th day arrived on time (arrival times vary) and I found myself with the realization that Whitney would only be with me for 6 more miles. I had thought about (for maybe 10 seconds) getting off of the trail with her. The pickup truck was there perfectly capable of transporting both of us back to Walhalla. The problem was I realized that I was slowly feeling better each day…..each day my legs were a bit stronger…my breathing a bit easier…my balance improved. I needed to attempt to finish.

Whitney, on the other hand, was making the right choice.  I’ve included a video (previous above) of our beginning that day hiking across the bridge which crosses Thompson Creek.  As is the norm I am running my mouth but take a look at Whitney.  She has her usual smile but the key is the way she walks across the bridge.  Those are some mighty dainty steps on extremely painful feet……and that’s on a flat surface. 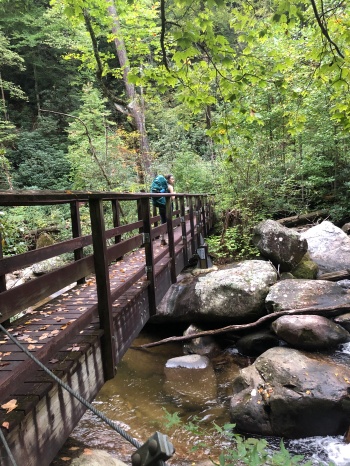 The day began with a 2.1 mile climb up and out of the Thompson Creek valley.  My mind wandered as I climbed.  I didn’t want to lose her but the selfish side of me wanted to finish this little hike.  I had already failed to accomplish one hike and I did not relish the thought of flaking out on another.

At the top of the 2.1 miles we came upon the Whitewater Corridor camp area.  It was empty……It actually was just outside of the corridor because camping within the corridor is prohibited. We were actually really near home.  A few thousand feet more and we would be back in Oconee County, South Carolina. 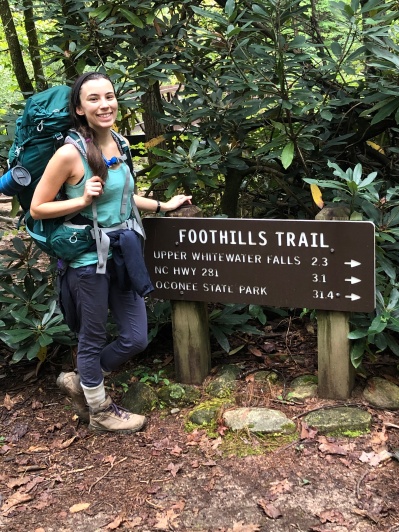 3.1 more miles to the truck.  It was really sinking in now….soon Whitney would be gone.  I’m not sure if it’s better to get a pre-warning before losing something or someone that you really enjoy being with.  I know all of you have dealt with that before.  One minute everything is right with the world….then it isn’t.  I’ve dealt with several loses in the past….I can’t really say that it gets any easier.  At least in this case I would see Whit again…hopefully with healed wheels.

I needed to enjoy these last 3.1 miles hiking up the Whitewater River with her.  I don’t think that she could have made it much further so I know that her mind was just on surviving the last leg of the trail. This section of the hike is easy since it follows along the edge of the river…..at least until you cross the bridge leading to the hike up to the falls.  Behind us we could hear voices….they were quickly closing on us.

It turned out to be a woman with either her daughter and the daughter’s boyfriend or her son and well you know…. The mother kept up a constant chatter as they approached.  They quickly passed us with a greeting.  I wondered if our now odoriferous bodies caused the “quickly” passing.  Soon we found them coming back toward us. They had run into a yellow jacket nest.  After some conversation Whitney and I moved on with them following.  The jackets must have been related to the hive the day before.  They paid us no attention as they zoomed in and out of the hole in the ground.  We all walked past them.  Once we made it to a small bridge which crossed a smaller feeder creek I stopped and waited for Whitney.  She sat down on the end of the bridge.  It was obvious that her wheels were running off of the track. 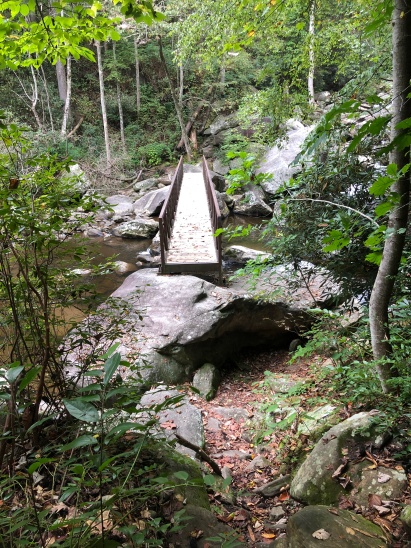 After a couple of miles we reached the main bridge which crossed the Whitewater River.  It would be all up from here to the truck….not that it hadn’t been up to this point….I mean really up!  Looking at the access and exit to the bridge I realized that although this is normally an easy obstacle….Whitney’s feet would make this a bit more challenging.

Looking up river toward the waterfalls.  Sometimes when the leaves are off of the trees you can see the top of the falls from here.  Not yet….we are still dealing with full greenery.

Instead we slowed so that Whitney could find a way to come down the tricky rocks to get to the bridge only to do the opposite on the other side.

On the other side we came upon two male hikers who were hiking toward Table Rock.  They both worked together in construction in Charleston.  A half a mile further we ran into a couple from Mississippi who asked where the falls were.  They had mistakenly parked in the hiker parking lot instead of traveling another one tenth of a mile and parking in the tourist parking area which gives access to a paved overlook of the falls.  Oh well….they were already about 1 half mile in….I sent them on to make the loop and visit the two overlooks.  It would amount to about a two mile hike in road clothes but I couldn’t feature them having to hike back to their car, driving to the other lot and then walking to the falls.  Mississippi may not like me now.

We had arrived at my truck.  A deal had been struck.  I was craving a turkey sandwich with real tomatoes and lettuce.  Maybe even some Duke’s Mayonnaise.  It wouldn’t hurt to take a short break. So we drove into North Carolina to a convenience store which had a small deli.  The best turkey sandwich that I’ve ever had. In fact I ordered a second one for the trail. We rearranged food supplies and drove back to the trail.  All in all about a two hour reprieve.

Back at the lot it was time to see Whitney off.  She struggled into the driver’s seat and soon she was driving down the mountain with me watching.  She tapped the horn a couple of times as a “Goodbye”.  I watched her as she drove out of sight.  She had hiked 35 miles with two very badly blistered feet.  She deserved to ride.  I figured that I better get out of the middle of the road.  Anyone who happened upon me surely would not understand why I was standing on the center line looking down the mountain. Then I remembered….another purchase at the convenience store…..I may have lost my daughter but I had gained a bag of Twizzlers.  Everything was going to be OK.

It was another 1.3 miles to the top. Just before I reached it I found our benches that we have all used so many times.  I took my pack off and just sat there.  There was no hurry.  The scenery was familiar but no less pleasant.  I had three days to finish 28.2 miles.  I began dividing by 1 and 2 and 3.  How many miles a day.  If I could get the next 4.5 miles I’d only have 23.7 miles to go. That would only be 7.9 miles per day if I hiked Friday-Saturday-Sunday.  Hmmmmmm. Lets think about this. I could double that and make it in 2 days.

I moved on toward Sloan’s Bridge but my mind was on not seeing Whitney in front of me as she had been for the last 5 days.  Yesterday the trail had looked like this above…today it was empty.  As I approached Sloan Bridge I planned to stop for the night.  I came upon a spot that I had hiked way back when I first began rehab hiking.  I had fallen on a root then while with Pam and Joe.  The fall had been brutal and I then proceeded to tumble off of the side of the hill.  Luckily a soft tree stopped me.  I’ll be really careful here……bamm…..I slipped on the very same root and down I went……How to you spell stupid?  Just a little blood letting but it gave me the incentive to get into camp, set up my tent and plan the upcoming weekend of hiking.  I was now officially Whitless but I could still spell my name and had most of my teeth.  Tomorrow it would be solo “Hike on”.