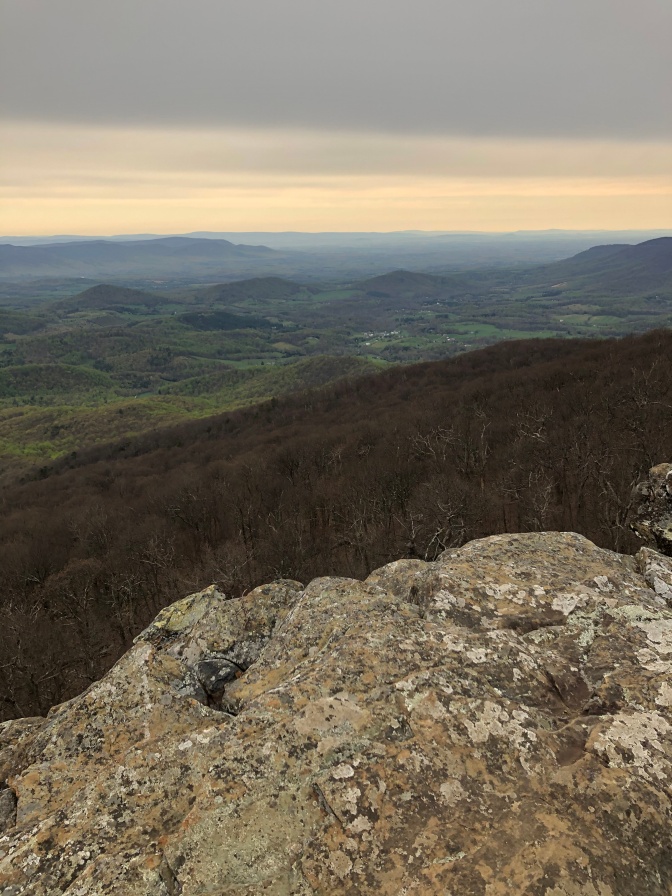 Action, Adventure and I had a high security meeting. We would make every attempt to get out of Dodge the next morning as early as possible. The reward was as clear as that carrot on that stick. Good things and a dentist awaited us in Front Royal. I had even called a dental group and they promised to see me first thing Tuesday morning. I promised to bathe before I got there. I also called Golden Corner Dentistry in West Union and they forwarded my records. A plan was in place. 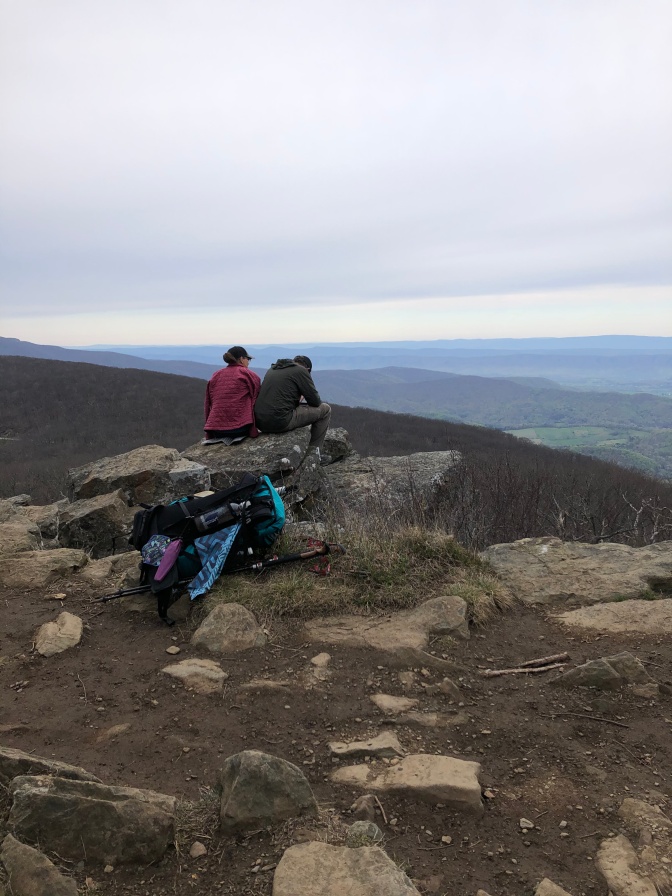 Why would it be any other way? The beginning of the day began with a 887 foot climb from shelter to peak. The good thing was that would be the bulk of the climbing for the day and then we would be dealing with a more than 4,000 foot descent to U.S Highway 522 and civilization. Somewhere down below was Spring and warmth.

The three of us made it 7 miles by lunch and took a break for food at a parking lot along the Parkway at Compton Gap. As we ate a hiker casually worked his way down from Compton Peak. It was obvious that this was a casual stroll for him. He had begun his through hike from Amicalola on 24 February. He had to go in to Front Royal in order to pick up his third pair of shoes at the post office. He was getting about 500 miles a pair. Tall and lanky he didn’t have much to say. He was intent…. and all of that intention was NOBO.

The trail became flat……. actually flat…… like never seen before for long stretches. We met a young lady from Washington, D.C. who was out for the day scouting out a future backpack. “Is all of the Shenandoah trail like this?” “Ah no but in general it’s been better than everything South of it. Her name was Kate and her trail name was Jackie O.

We were close to the end. Civilization soon. We had been hearing about these two hikers one of whose trail name was Pyro. He had been leaving graffiti along the trail of his name. Action or Adventure saw it first and called our attention to the “artwork” on the registration kiosk to the Northern end of the park. I turned 180 degrees behind to them and then 180 degrees back to the graffiti. Bam!!!! It hit me. My outer limit of vertigo had been passed. I was in vertigo two step. Vert T. Go was back for the moment. I staggered to the park limit and collapsed on my pack. A & A waited as I recovered and then we moved on with me in the rear. I can only say that the remainder of the 3.6 miles wasn’t any of my favorite. 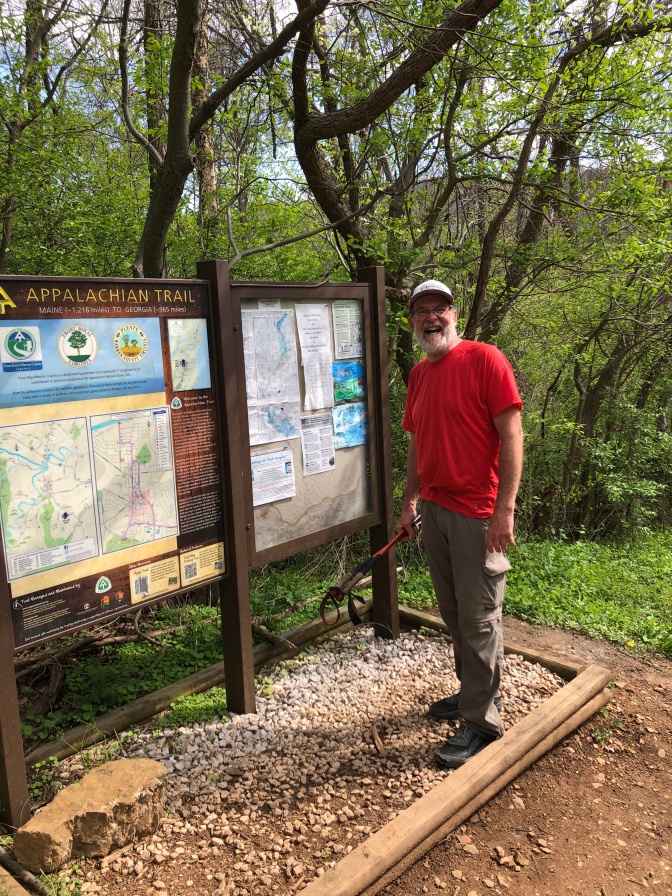 Suddenly we found ourselves in leaves and green grass. We hadn’t seen this since we began way back on March 21st and 22nd. How novel!!

Action and Adventure had his student’s mother Patty coming to pick them up. She graciously offered to bring me into town.

We’ve Made it to Mountain Trails Outfitter in Front Royal

The eleven straight days of hiking were completed and I was now almost at 269 miles. Most of the restaurants were closed but Action and Adventure bought themselves some new footwear. I wandered across the street and bought a cold drink. Once in the room I wearily showered and did laundry. Two more attached ticks had claimed me. The Dude called and we ate BBQ together. We agreed to have breakfast together before I visited the dentist. I gotta tell ya….. I was whooped. I was more than happy to know that there would be no hiking on the next day.