This was going to be a shelter to shelter day. I’ve been sleeping in my tent but staying near the shelters assure that you have both a water source and privy near by. The word is that the bubble of Springer through hikers are now only about three or fours days behind us. Evidently there is a bubble of about 30 or 40 super hikers out in front followed be a larger bubble somewhere behind them.

My first human contact today was with two married day hikers who went by Smokie and Mama Bear. 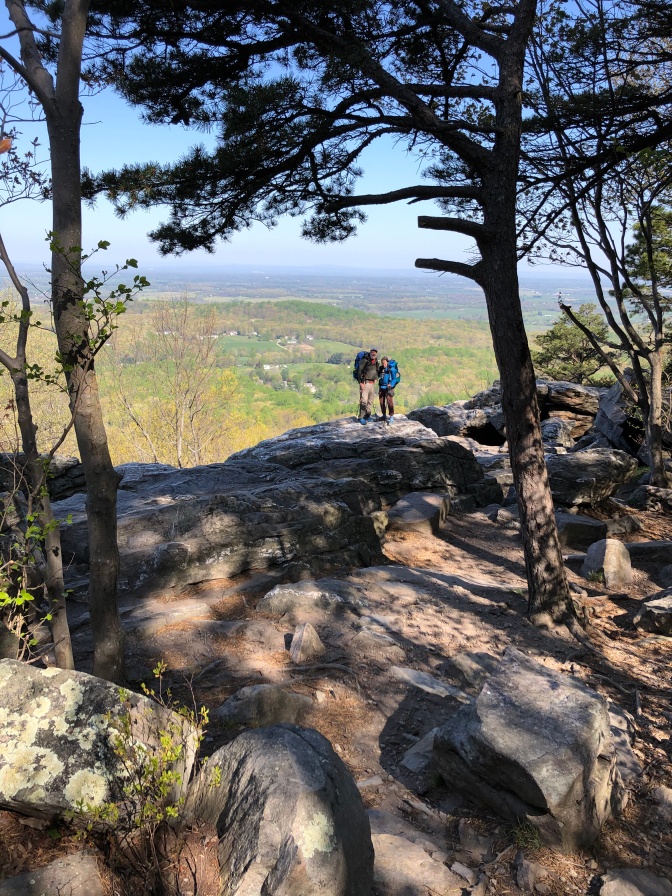 We were by now well into the roller coaster. Thoughts of being finally out of Virginia were a high priority. Adventure had called ahead to the Bear Den Hostel hoping to secure lodging but it was a Friday evening and we were competing with weekend hikers for the spaces. We backed off to getting into the last shelter in Virginia.

We were now looking into the final few views of the Northern most limits of the Shenandoah Valley. Spring was definitely near and it seemed that the arrival of warmer temperatures by next Wednesday (six days) might actually happen.

As we were about to hike on  a group came down to the cliffs from the hostel above.

“Do you know the AT hiker up at the hostel who is hurt? He’s an older guy with gray hair and balding.”

The description didn’t actually totally fit Papa Muskrat but we couldn’t take the chance that it wasn’t him. Not that we could do anything to help him but it would give us a great opportunity to harass him about getting hurt.

You’ve got to remember that most of these hikers out here are kids in comparison so they see all of us gray beards as ancient. We climbed the unwanted hill to the hostel to check on Papa Muskrat.

When he came to the door we realized that we had sought out the wrong Muskrat. It was Ratatouille whose name we had seen in multiple log books. He was noticeably limping and his face was covered in new bloodied abrasions.

He explained that he was climbing the rocks on the trail when his hiking stick bounced back on hike catching between his legs. He did an immediate face plant. Well bloodied he managed to get to his feet somehow and struggle into the hostel. He had been there a little more than a day and planned to remain another 36 hours to see if he could get back on the trail. He was in no mood to quit.

I’ve posted several pictures of the hostel which is not too shabby.

After all this time this is what I was attempting to reach. One step out of Virginia. It was on a long steep incline made up of loose gravel. If it looks like I was really tired it’s because I was really tired. As a matter of fact I leaned up against the sign in order to get a free hand to snap this picture.

At the top I found Action and Adventure patiently waiting and eating lunch. This rock was what was attracting all of the tourist. I joined them for a Spam sandwich and in a short time Shotput and Pansy showed up. “I’m going to have to send Pansy home ,” she announced. She’s beginning to give out on me” I quietly secretly cheered the decision. People don’t  realize how tough this is on their dogs legs. 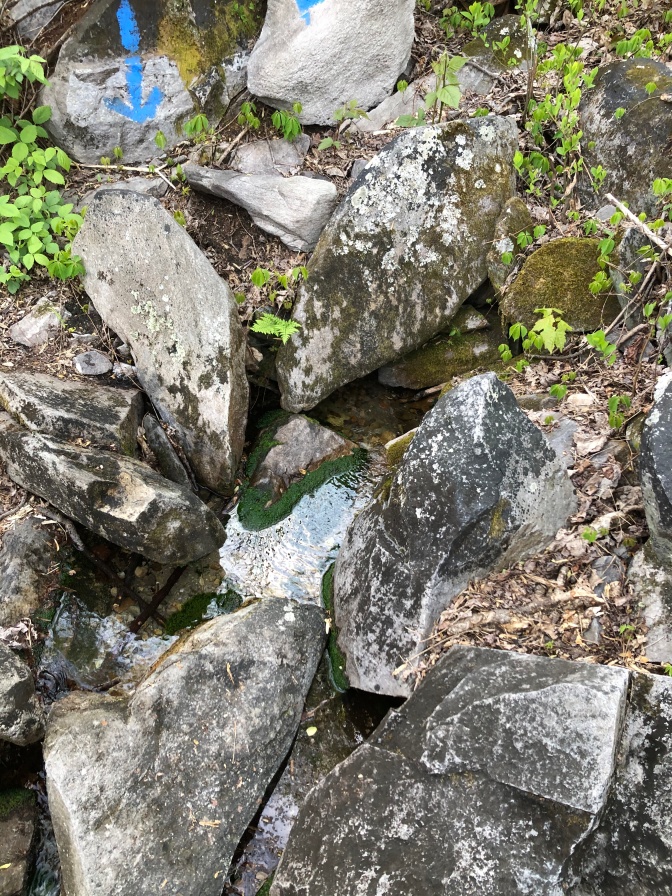 At 14.5 miles we stumbled into David Lesser Memorial Shelter. It was the weekend and it was packed. Lots of non AT hiking youngsters. Firmly implanted with space reserved in the shelter was an uninjured Papa Muskrat. I wandered down into the campground in search of Action and Adventure and found them where I figured that they would be…… as far away from the noisy campers as they could get. Next to them was a hiker named Joel who was hiking all of Virginia.

I wasn’t sure if I had the strength to do it but I managed to get my tent up and then was faced with a long hike down the mountain to get to a spring for water. It felt like I was hiking back to South Carolina. Along the way I met an older guy wearing pajama bottoms and flip flops attempting to climb the mountain with his newly obtained water. I said hello but he didn’t have the strength to answer. Each step was painstakingly laborious and exhausting. I guess he made it because I never saw him again.

Above our site Shotput and Pansy set up their tent. There would be four of us hiking the trail that we knew at the campsite. The others were loudly having a good time. I envisioned a noisy night.

I did not want that…. tomorrow would be a hike into the elusive target of Harper’s Ferry. It was calling for rain and cold temperatures the next day. The thought of getting into a shelter was extremely appealing.

Besides ….. I was now constantly soaked by my damaged mouthpiece. I had looked for one in Front Royal with no luck. I had looked at the Waysides with no luck…. maybe Harper’s Ferry would be a gold mine for mouthpieces. It would be nice to “hike on” with a dry left leg.