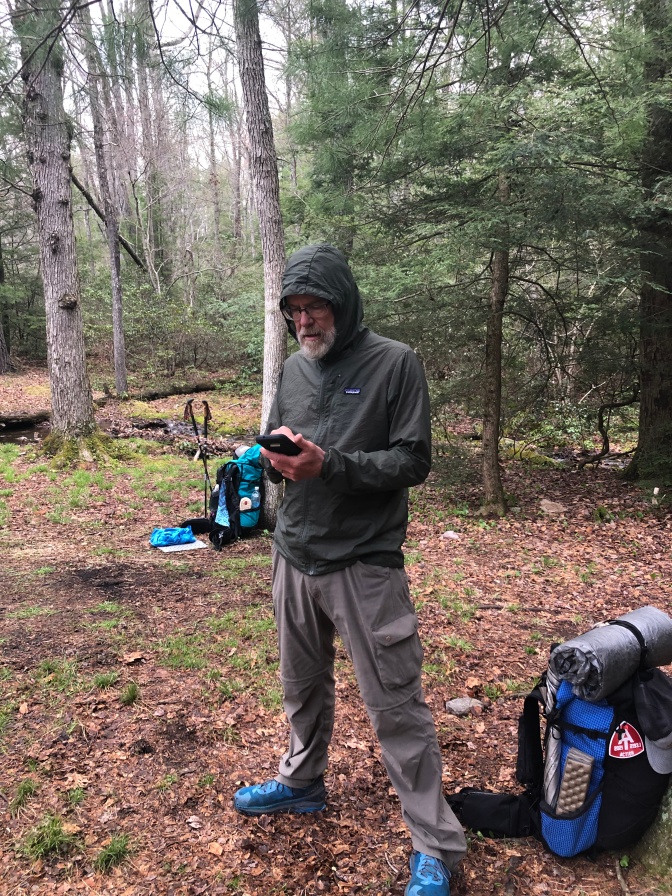 The next morning everything was supersaturated. I took off the rain fly from my tent and draped it over a downed tree hoping that it would dry. That didn’t happen so it got rolled up wet. The weather tones had gone off warning everyone that there would be a high wind advisory beginning this afternoon at 1400 hours (2 pm) and continuing until 0200 the next morning. Sustained winds about 20 mph with gusts up to 50-60 mph. Those are not pleasant…… the trees and branches become missiles as you walk.

0820. Remembrance of 2020 Pandemic Closing of Trail at Halfway Point

We hadn’t gone far when we came upon this new halfway point sign. You can’t see it well but the bear is wearing a mask.

10 minutes later we came upon a second halfway point sign which appeared to be older.

0830 Tumblelina of The University of Georgia

As I was reading the second sign I heard footsteps coming down the trail and when I turned I saw Tumblelina approaching me. Several days before we had briefly met him as Action, Adventure, The Dude and I had been clogging the trail ordering pizza and subs. He had quickly passed us and I figured that we would never see him again since he is hiking with a tramily that is kicking out some mileage.

I asked him what was happening and he explained that his parents had come to see him and that his dad was going to backpack with him on an overnighter. ” I’m really pumped about him doing this with me! We used to backpack together when I was younger but he can’t do it so much anymore.” The excitement in his voice was infectious. I thought about how much I would enjoy doing that with my sons and grandchildren. My daughters have been great. Both Whitney and Jessie have been active hiking with me. Tory in the past has actively day hiked with me. 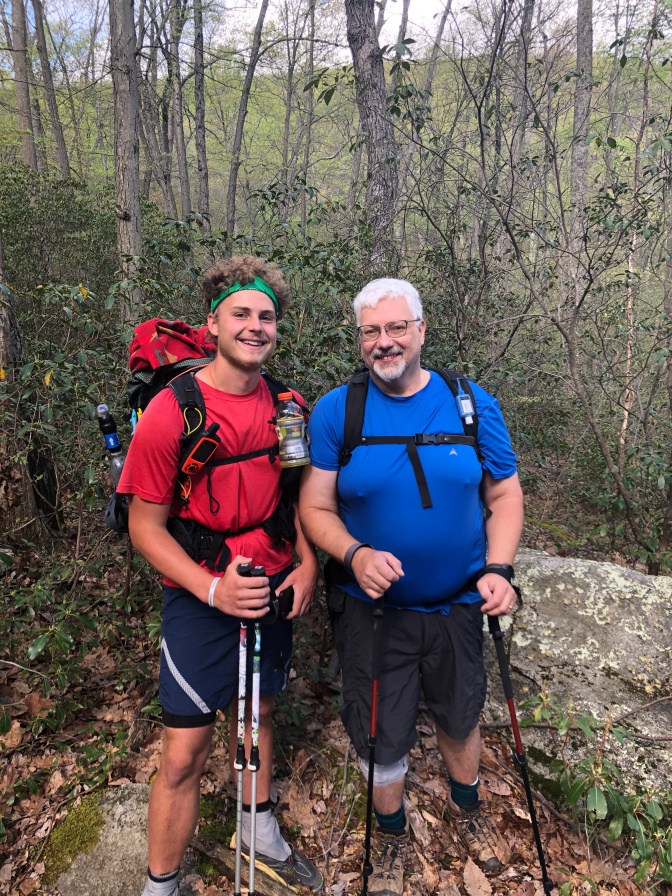 1006. Tumblelina and his Dad from Georgia

An hour and a half later I came upon them hiking together. Tumblelina is a Junior at The University of Georgia studying mechanical engineering. He has taken a semester off to do the trail figuring that it would be a great time to do it while classes were all online. I felt great about their time together and there was no doubt the the father-son bond between them was strong. 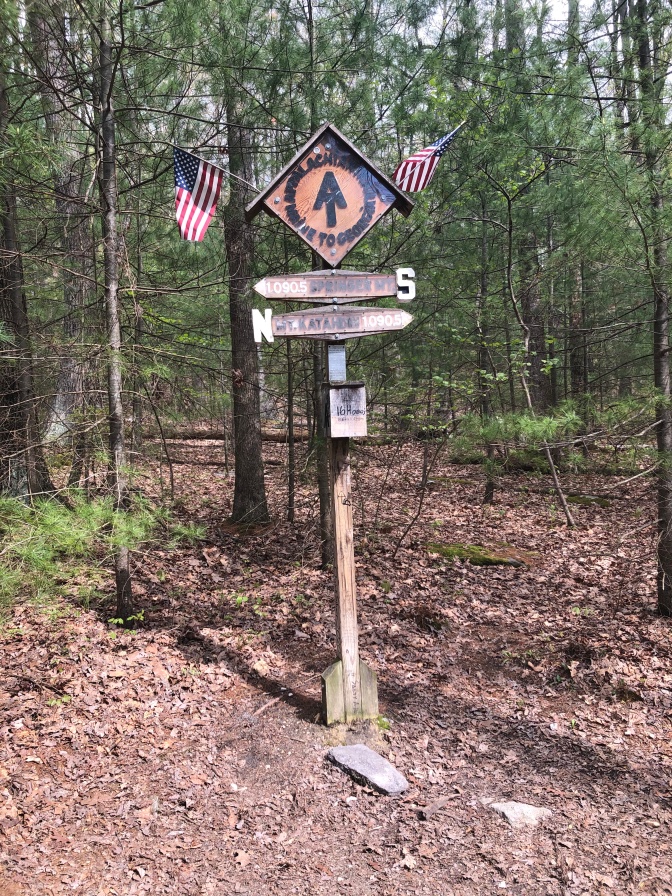 1020. Dang That Halfway Point is a Moving Target!

So here is the third midway point sign. They evidently don’t take the old ones down when the mileage changes each year. We can literally see where the trail has physically changed while we’re hiking. In general most of the revisions have been to increase the mileage since the tendency is to replace straight up climbs with more user friendly switchbacks.

1109. An Eagle Scout Project Without an Eagle

As the day progressed the wind also progressed. It was obvious that later in the day we would be dodging tree branches. I soon heard  conversation ahead. At first I assumed that Action and Adventure had met another SOBO hiker. Conversation is easy with most of the hikers and it’s never long before you know all there is to know about new encounters. But…… in this case it wasn’t A & A. It was a team of men rebuilding one of the bridges. I was told that the new bridge was an Eagle Scout project without a scout present. 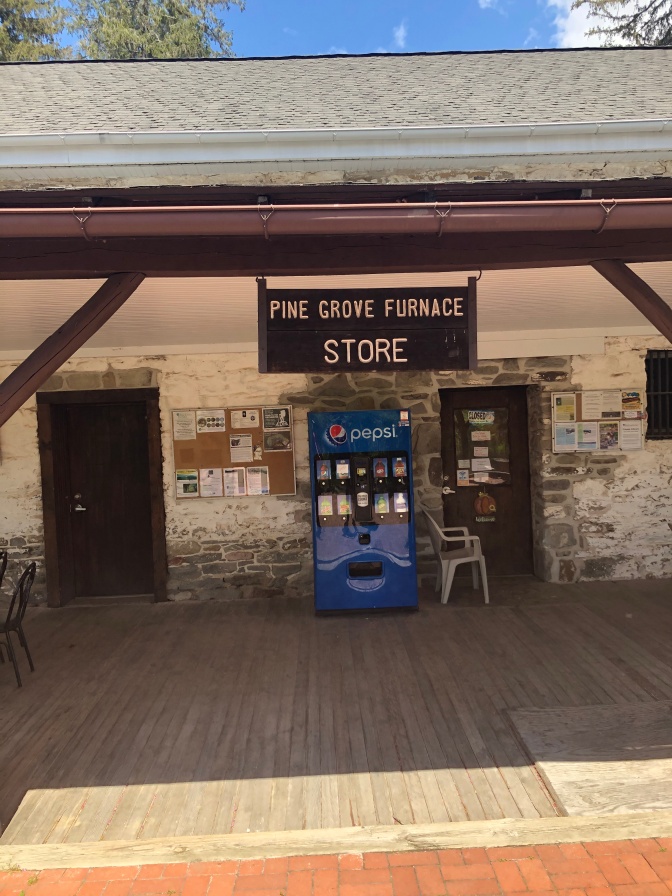 I’ve always heard a lot about this place. It’s the home of the halfway half gallon ice cream challenge. Luckily for me they have not opened it up for the season yet. The word I’m hearing at the moment is that the challenge was to eat the ice cream in a certain time. If you do you get to put your name in a book. Not worth it. Besides the ATC is not counting the hike for anyone this year so it doesn’t really matter. 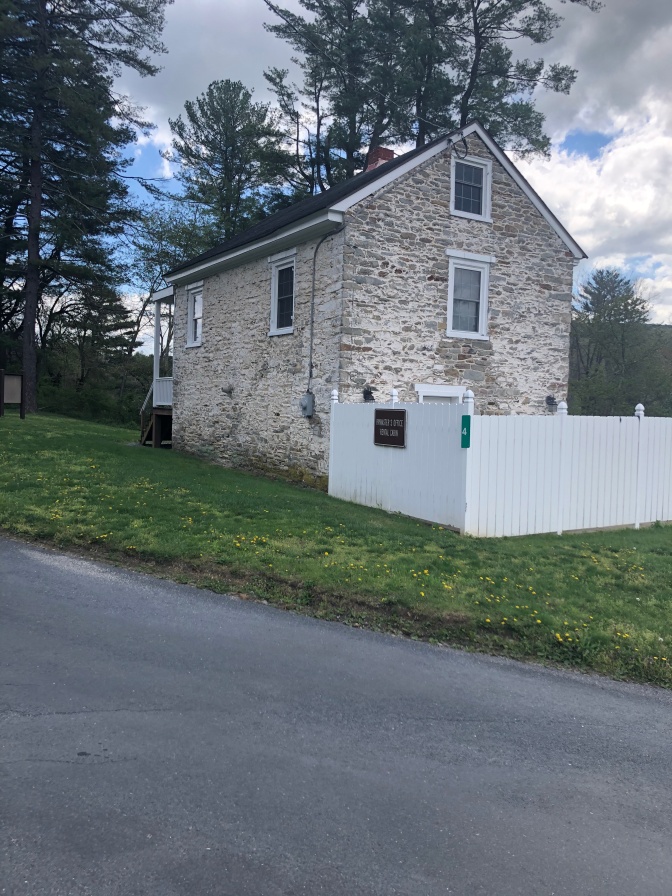 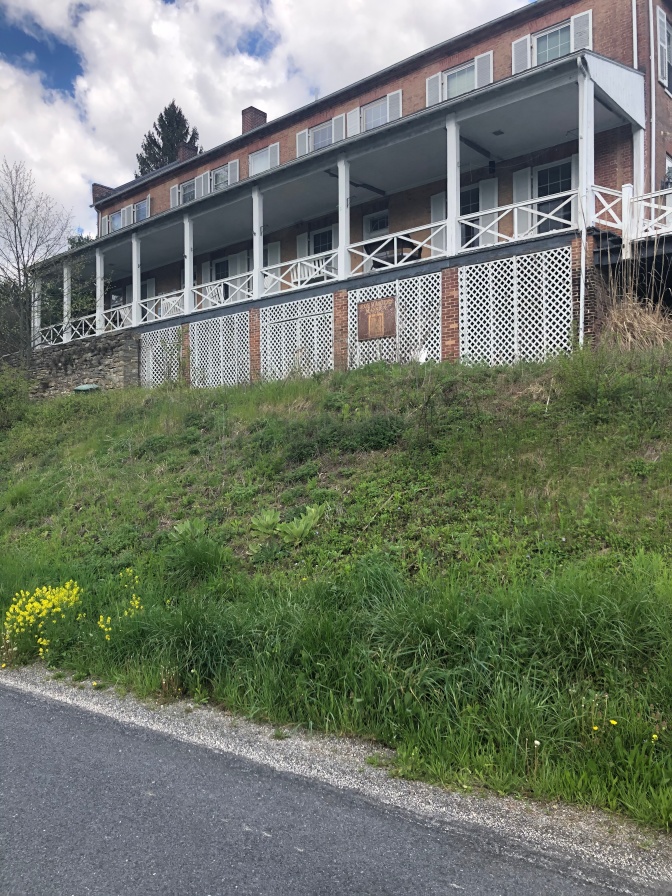 The three of us took a break here. A well maintained park with the bonus of a soft drink machine. The last two pictures are of the Appalachian Trail Museum.

From that point on it began to get serious. The wind was picking up drastically and branches were falling everywhere. We heard from The Dude and Papa Muskrat and they got off the trail to find a motel. We had committed ourselves to getting inside a trail shelter rather than a tent. Twigs peppered me as I walked and several larger branches fell near enough to me to have me jumping. I arrived at Jim Frye Shelter after A & A and found the shelter empty. We were in luck. We made our claim. We thought we had it made. Within an hour there were 8 of us. Tumblelina and his dad showed up. Finally Babuska, ID, and Young Chef appeared. They had at least three more in the tramily but they had decided to take shelter in the toilets at Pine Grove Furnace. Sometimes it’s not safe to hike on.