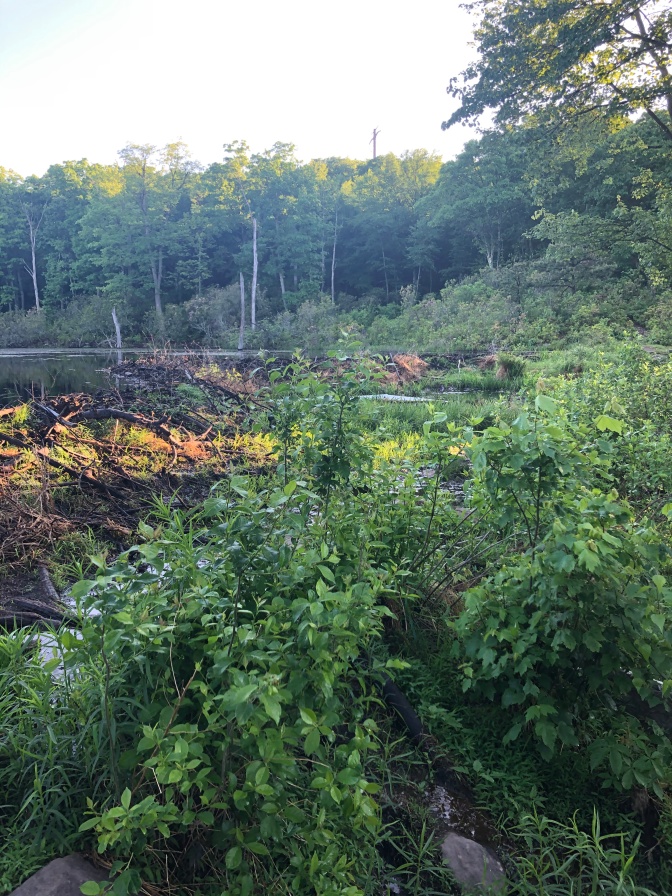 This morning’s hike began at 06:46 and for a moment it felt like Maine. Small ponds are abundant there and they certainly add to the beauty of the area. This one was occupied by beavers. It took a little negotiation to cross the dam but we were soon over the impediment. Denim Dan and another section hiker caught up to us here. Denim is the only hike I’ve seen hiking in blue jeans. It’s got to be wicked hot. He wears a straw hat and seems to be quite a character.

It was fascinating to look below and realize that the fog was only over the flow of the Delaware River. 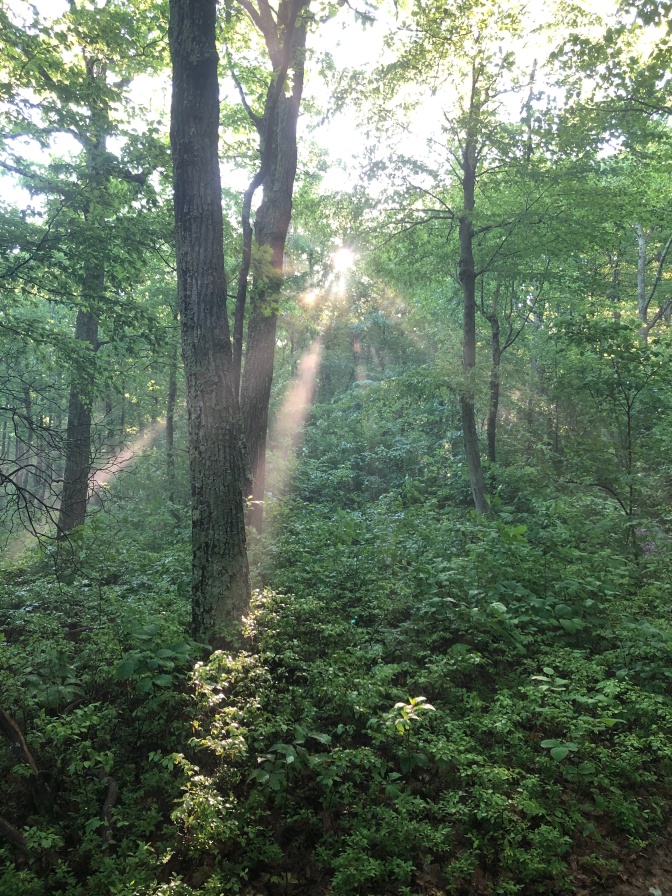 The day was young and the sun was just beginning to work it’s way into the sky. The result of the rays were beautiful. 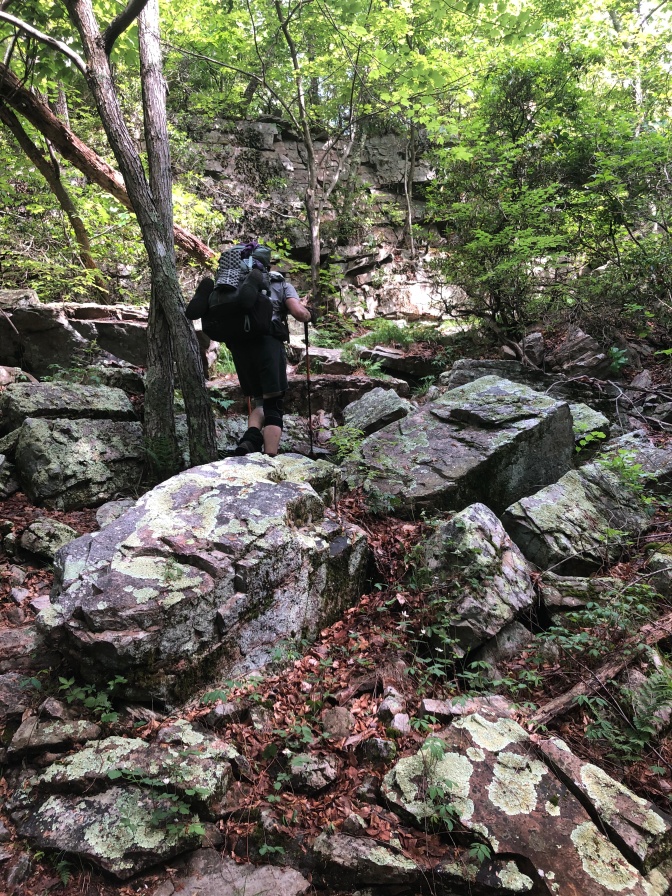 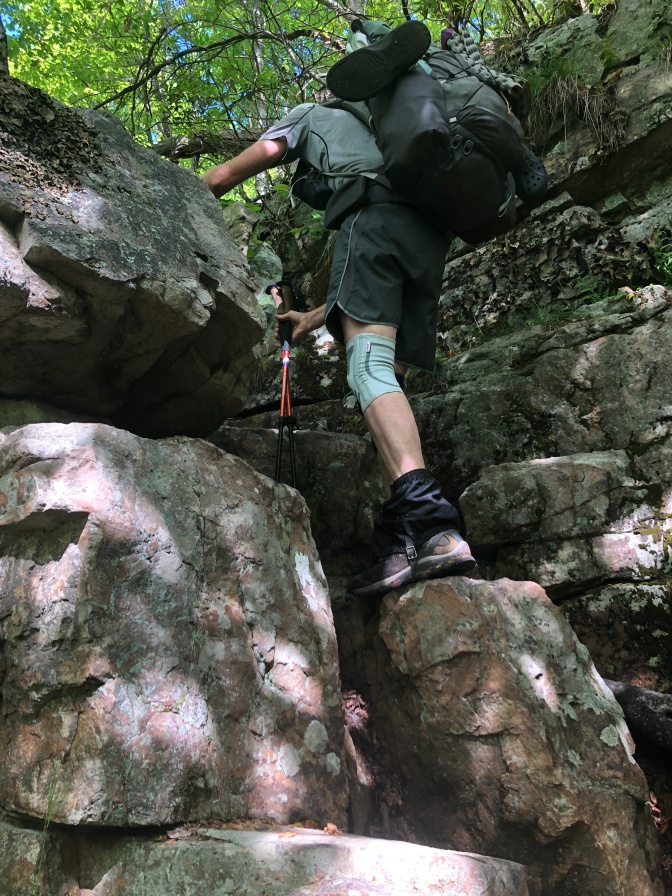 And then it became Pennsylvania again. 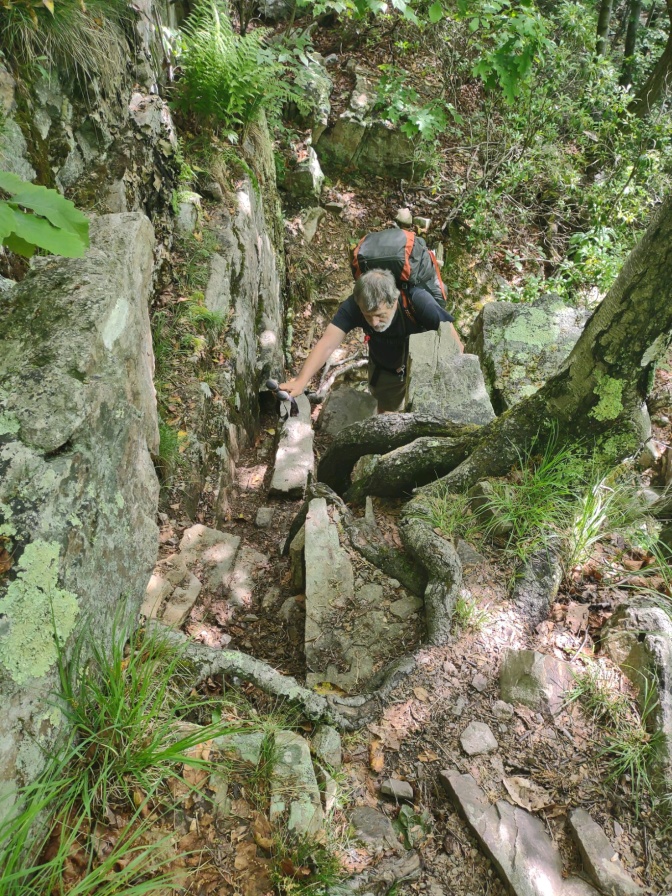 12:24 Me Not Climbing the Non Existence Rocks of Jersey

I really have reached the point that it doesn’t matter if I’m going up or down. My legs feel good even when my head doesn’t agree. It’s impossible to say how much more I could be doing if my head wasn’t constantly dancing. Even the pack is not a problem even though I look forward to a rather large shipment home in exchange for lighter options on certain items.

Culver Lake was a decent size with the mountain ridge I was walking separating it from Lake Kittatinney. The trail went right by a restaurant so I continued my tradition of stopping to eat. That pretty much insures that I’m normally the last one into camp.

Once I left the restaurant I came upon this snake made of pulled garlic Mustard weed. Soma was now helping Landslide pull the pesky weed. The thought came to mind that I was falling further behind even though they were hiking and pulling weeds.

I arrived at Gren Anderson shelter and found Soma, Landslide, Denim Dan and New Bedford and new hiker just on the trail. We all piled into the shelter. The temperature had dropped drastically and there was an army of mosquitoes. I tried to stay out to make phone calls but I was driven into the safety of my sleeping bag……. that is……. until I was awakened by snoring….. loud….. continuous…….I lasted as long as I could. The night had been a problem with calls about the Massachusetts home front. I needed sleep. I pulled my bedroll quietly out of the shelter and wandered away and dumped it in the woods. I spent the night cowboy camping. It was a great sleeping night even if I had to bury my head from the mosquitoes. Tomorrow I knew that I would be able to “hike on”.