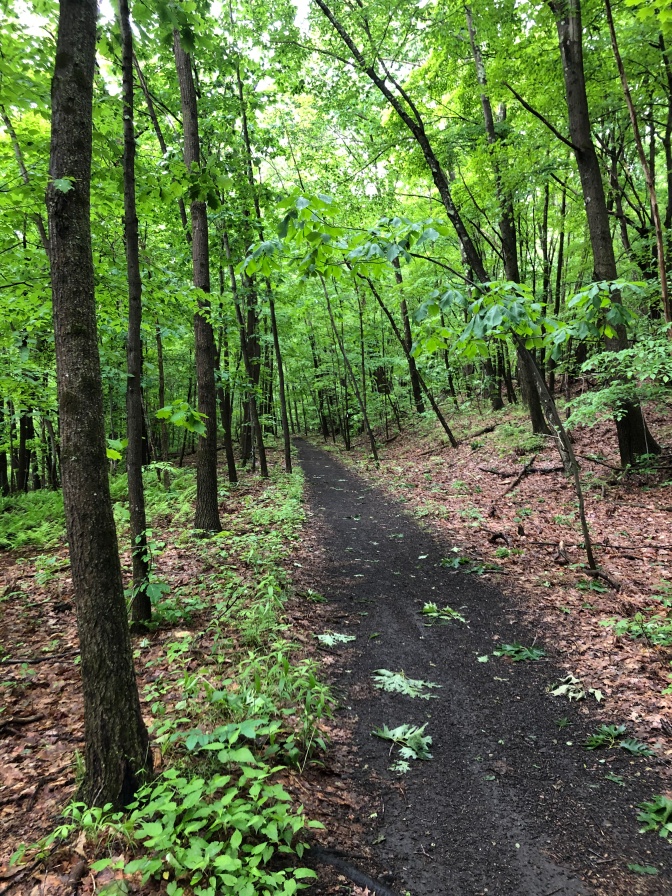 After two days of camping gear being spread about the motel room the place was ……. well…… a mess. It was quite forested. So Landslide and I went on a cleaning binge and then left the cleaning ladies a tip. They should have tipped us!

We were more than prepared for wet but were presently surprised. The trail through pasture was mowed!!!

Not long into the hike we found trail magic. It must have been left over from yesterday. One Gatorade apiece which we immediately downed. It partially made up for the puny breakfast. 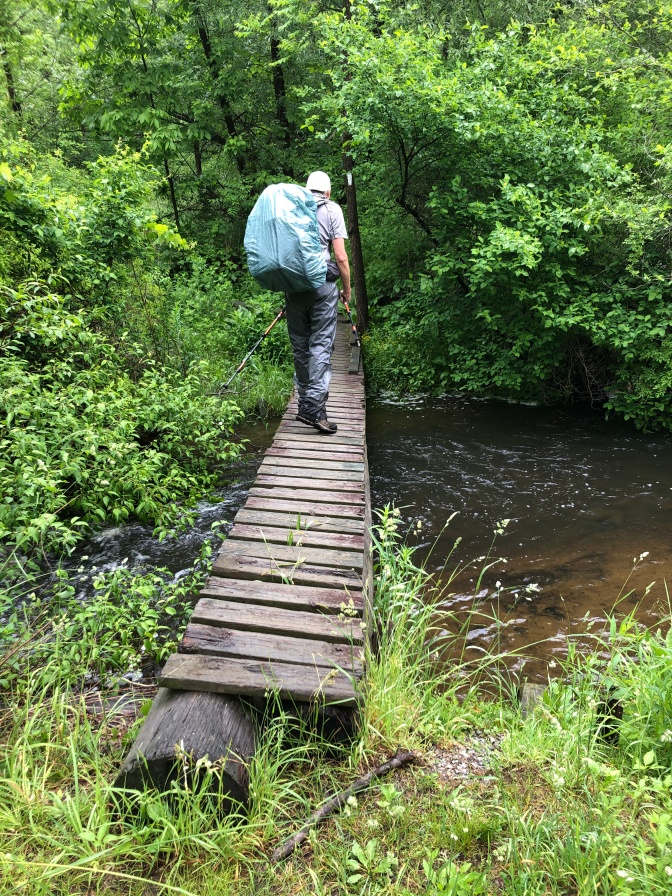 We were immediately crossing waterways that had been merely a trickle two days ago. Now they were extremely active. 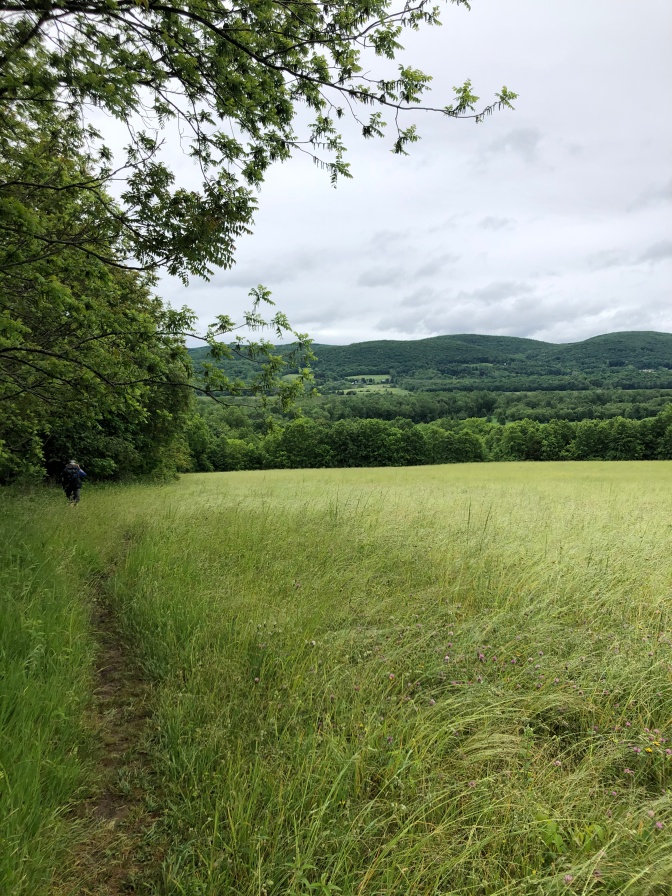 Our first climb would be Pochunk Mountain which had a shelter about a half way up it. A local out walking his dog kindly pointed it out for us.

The AT wraps around this national wildlife refuge preserve. The hike was long, flat and a rectangle. From there we hiked into bog. 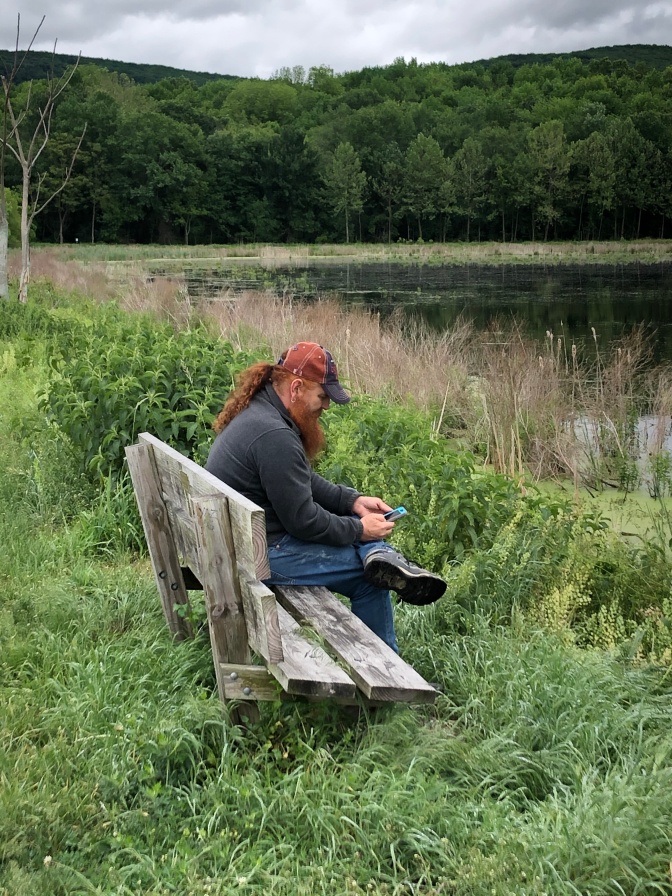 This entire area is a bog so hiking involved hundreds of feet of walking on wet slippery walkways. 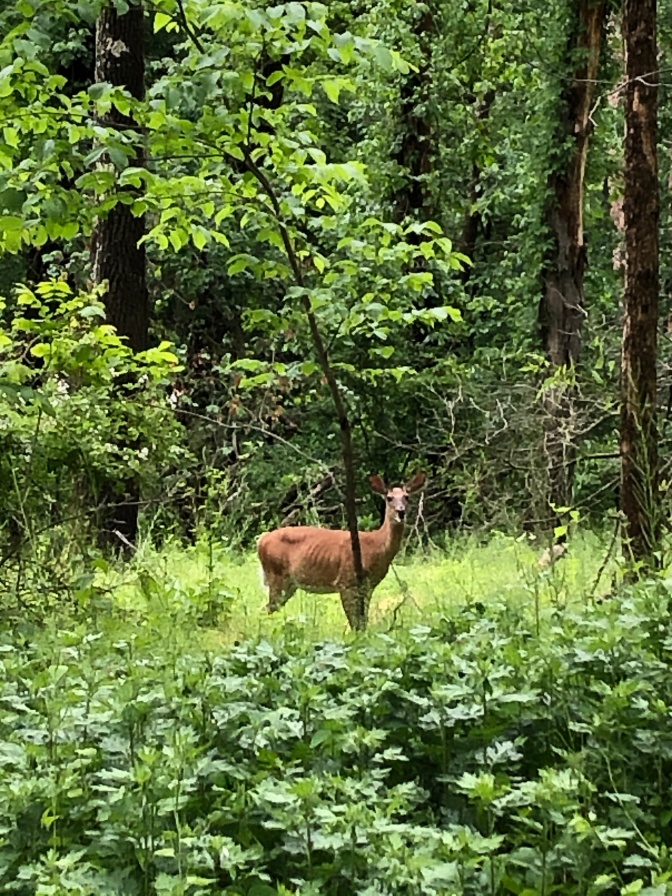 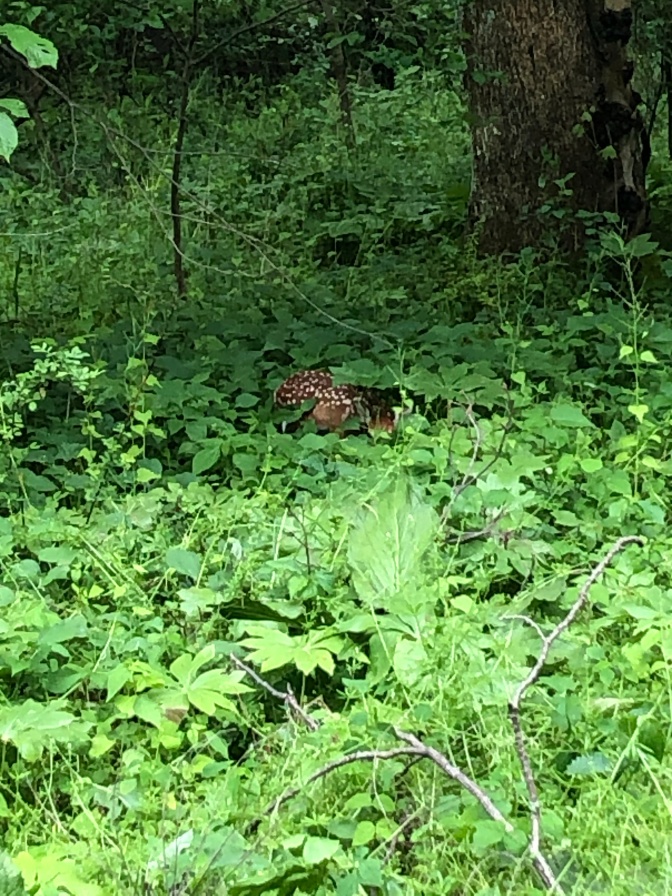 As we walked along we suddenly came upon a doe feeding on the trail. She didn’t move for the longest time and even when she did her eyes were on us. Landslide turned and looked behind us. There hidden in the greenery was a young fawn . He was perfectly still awaiting our departure.

For lunch we stopped at Pochunk Shelter. There we found Skirt who was a new Ridge Runner. He had just finished his training the week before and boy could he talk. His purpose is to help hikers and keep the trails and shelters clean. I asked where he was going next. “I’m going to hike over to High Point Shelter.” “That’s quite a distance,” I replied. “It’s only 4 miles.” he said. IT WAS 12 1/2! Back to school for him. The hikers may have to rescue this runner.

The Umberger Family began their AT hike last September from Georgia. They hike on weekends and evenings section at a time and during the week he works on line out of their family van. Dad (Ranger Bob), mom (Butterfly) and their 6 children ages 8 and up. I didn’t get all the names but the oldest son was Livingston and there was Hokey, Hot One, Sawhet, and Pink Burry. Don’t ask me about school cuz I didn’t ask. I will say they were extremely intelligent children. We talked for about 4 miles until we hit a road. There was no question ……they did not attempt to cross. They waited for their parents. 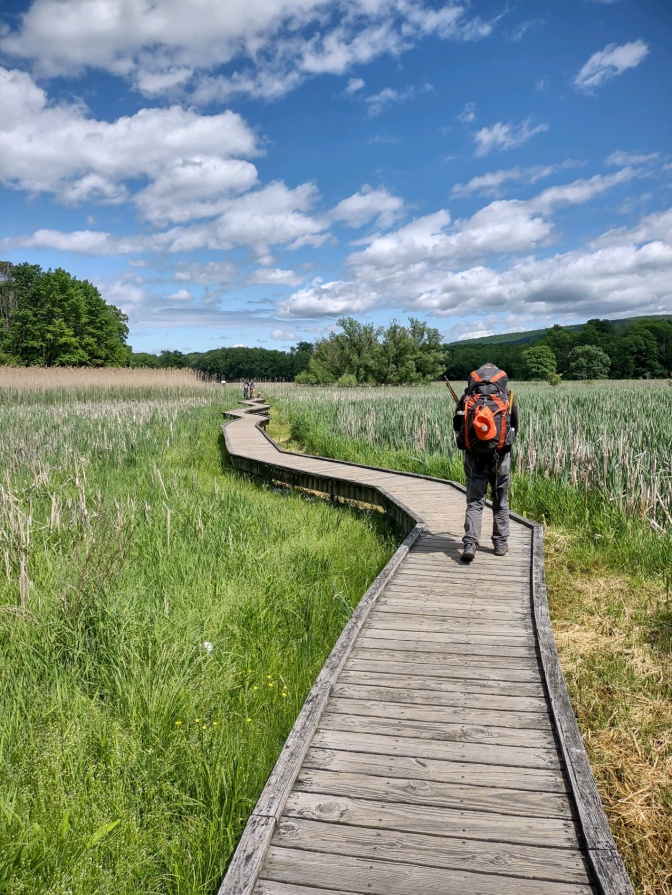 15:02. The boardwalk to Stairway to Heaven

Prior to the wicked rocky climb up the Stairway to Heaven to Pinwheels Vista you walk along a long boardwalk through a bird sanctuary. It was Memorial Day and the only day of good weather during the weekend so the place was packed. We ran into the Umbargers again. Once at the top of the 900 foot elevation climb it was on to Wawayanda Shelter.

The bubble had caught us and the place was packed. Noisy chatter filled the camp and I longed for the peacefulness we had experienced prior to this night. I will say though when 20:00 hours hit (8 pm) it was totally silent. Hiker’s midnight had arrived. Sleep on.