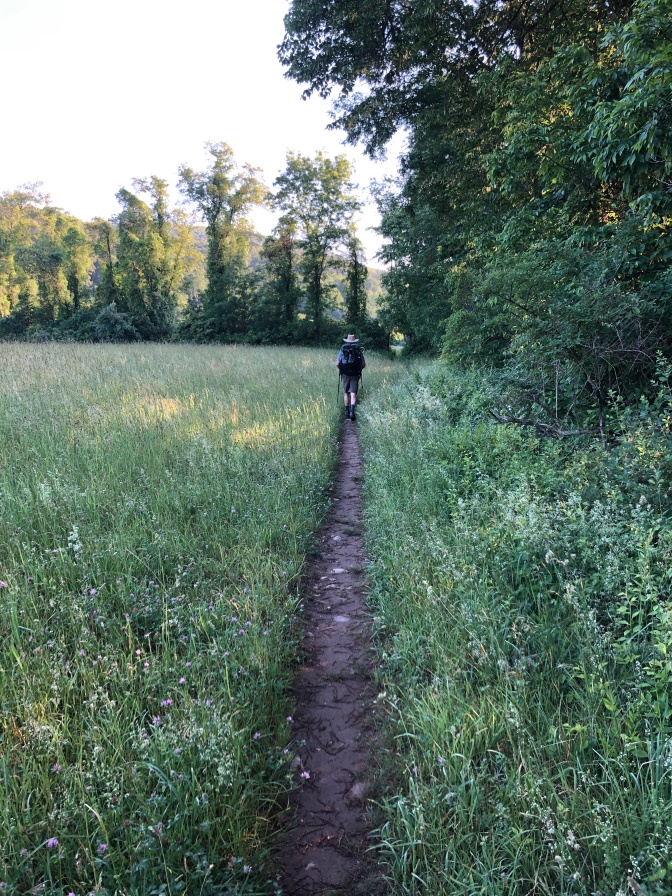 This morning began at 06:20 with the hope that we would be able to pound out 15 miles. It began peaceful enough with hikes through grass up and down gentile slopes. It would be great to say that the grass was dry but that just wasn’t the case. It didn’t take Hawkeye long to outpace me and I soon found myself solo hiking once again. We’ve learned that the only way to coordinate this is to prearrange a final resting place and any intermediate place of interest to meet. 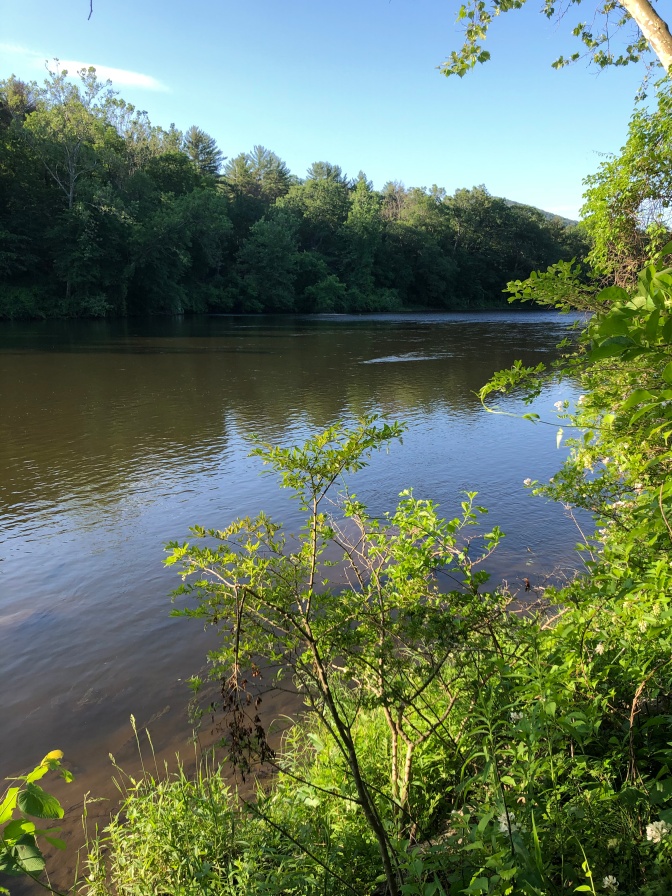 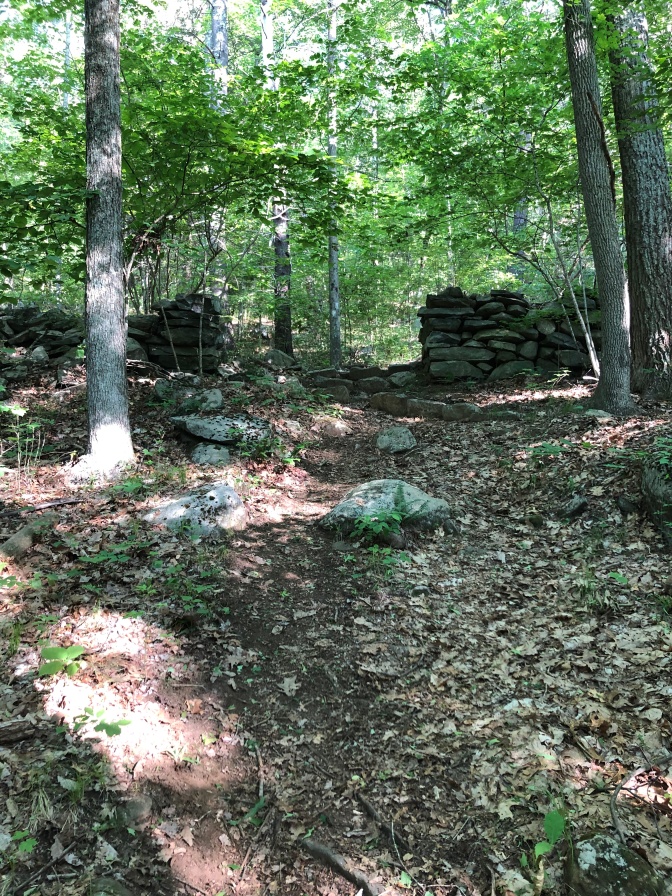 It didn’t take long for the remembrance of New England forests to return. I immediately felt and remembered the countless hours we spent as children in woods like these. As a matter of fact unless I was on a baseball field you could pretty much depend on finding me and all of the neighborhood kids in the woods crisscrossing over the stonewalls. Cowboys and Indians were not a thing for us….. it was always Rebels and Yankees . Now I found myself once again hiking across similar stonewalls and hiking through what seemed like endless miles of forest.

Several miles ahead I came to a detour sign on the highway. It stated that the rocks on the next waterway were no longer safe to cross. It recommended taking a blue slash trail around or fording the waterway without rock hoping. I hiked to the creek but knew when I got there that my unsteady gait would not allow me to rock hop. Off came the boots and on went the Crocs and before I knew it my feet were refreshingly cool and I was on the other side.

09:37. Connecticut is Not Flat and is Not Rock Free

Whoever said that Connecticut was flat and rockless is drinking the same Kool Aide as the folks in New York and New Jersey.

It began innocently enough. I noticed new green leaves on the trail. At first I felt as though the trail maintenance folks were trimming nearby greenery. It also seemed that it was raining with no clouds. The picture above is one of the springs totally covered in new leaves. 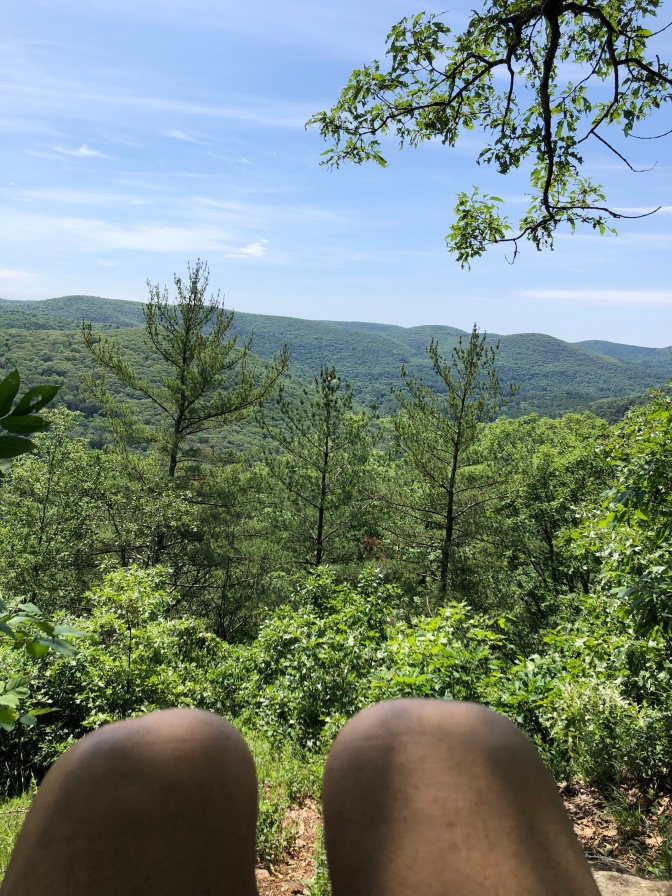 I hiked through it occasionally leaving the bulk of it but always returning to it.

I have become totally comfortable with my pack and have been coordinating with Jan to replace several of the items to lessen weight or improve performance.

The need to lighten the load becomes more evident every day as these rocks remind me of what’s ahead in Northern New England.

During the entire day along the river, climbing over the rocks and hiking through the forest the signs of leaves on the ground became more and more evident.

It wasn’t long before I realized that it was caterpillars. They were eating the connective tissue between the leaf and the stem of the branch. The rain was their excrement. It was raining caterpillar do on my head!!!! The crunching was so loud that several times I thought that I had another hiker coming up from behind me.

As you can see the result was the deleafing of about 15 miles of forest. 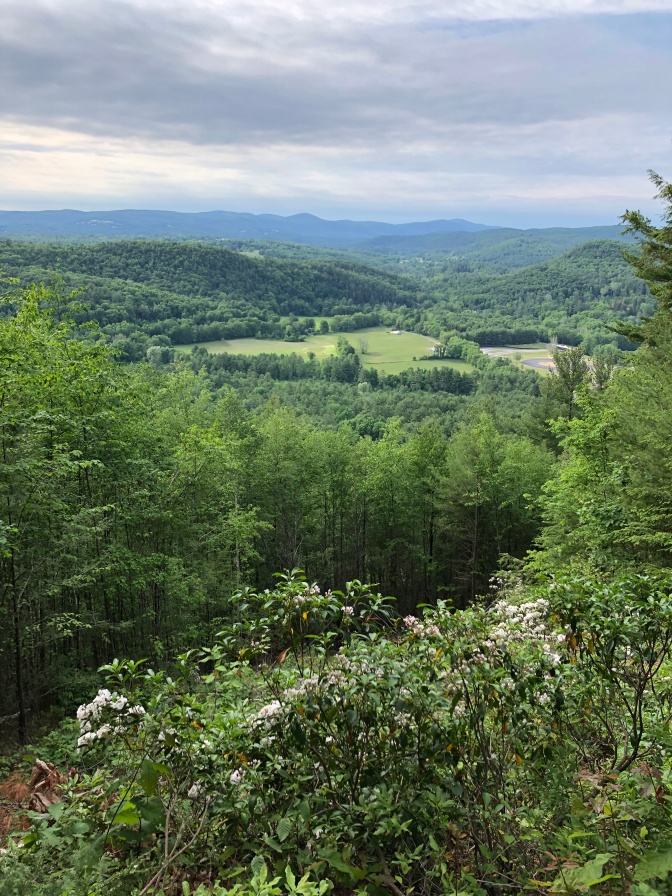 As evening approached I worked my way into Belter’s Campsite. From a distance I could see a person sitting along the side of the trail. As I approached he stood up. It was Silver my long time hiking companion at the beginning of my 2018 AT hiking attempt. We had not seen each other in three and a half years. He is now the manager of the ridge runners in Connecticut. The day we met in 2018 he was wearing a kilt and I had not made it more than two miles into the 2,200 mile trek. The reunion was what I thought it would be and Hawkeye and I would spend parts of the next three days with him.

Little Bear had also managed to make it to the campsite. Tomorrow would be a hike to meet Silver. We were quickly chewing up Connecticut.

It’s hard to describe a reunion with someone who you went through so many hardships with. In the beginning it was Silver and No Name… then Spoons and Sunshine…. and Huck and Ray…and Hawkeye….and Jed (Rich Reece). Then Zak and Fallon and Redcoat and Alex and Allison. They and more created a months long journey that will never be forgotten. Each and everyone an integral part of ‘hiking on’.