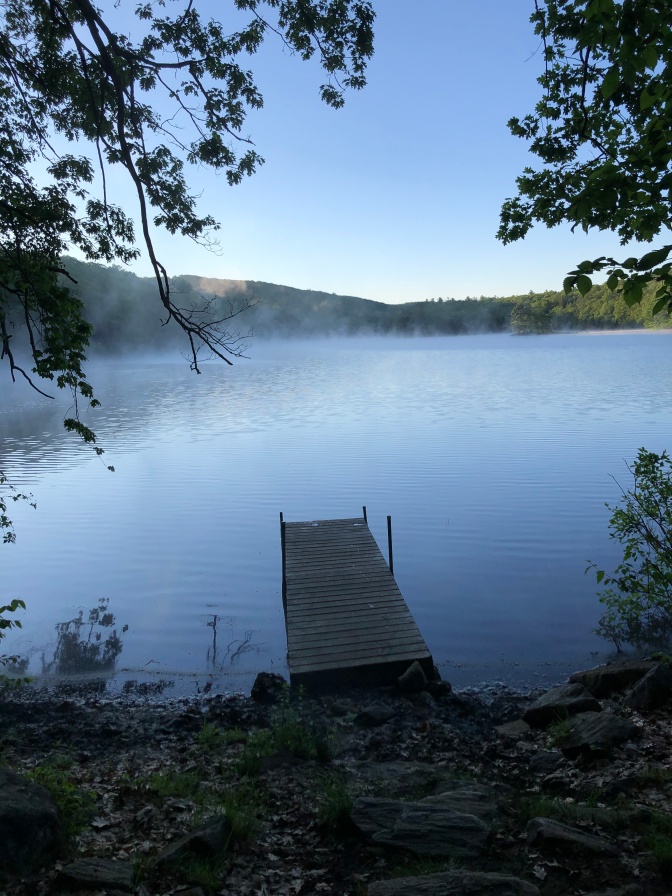 There is something soothing about sitting along the edge of the lake at the crack of dawn. I found myself the next morning sitting on a log watching the fog lift above the water and just enjoying the peaceful moment. Soon enough the others would rise and be on the move. Hawkeye, of course, had been up for at least an hour and was well on his way to begin the day hiking. 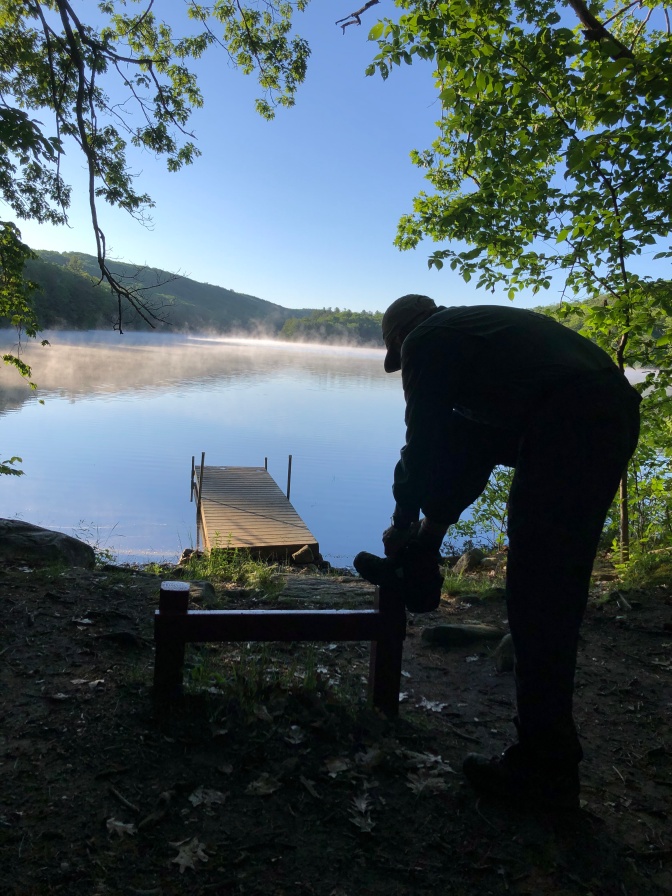 While I was sitting there Landslide appeared in order to join us for this days hike. It’s amazing that in this simplistic environment I found it interesting enough to even take a picture of a man tying his boot with the lake as a background to the act. Things are simple out here and I would like very much for it to stay that way.  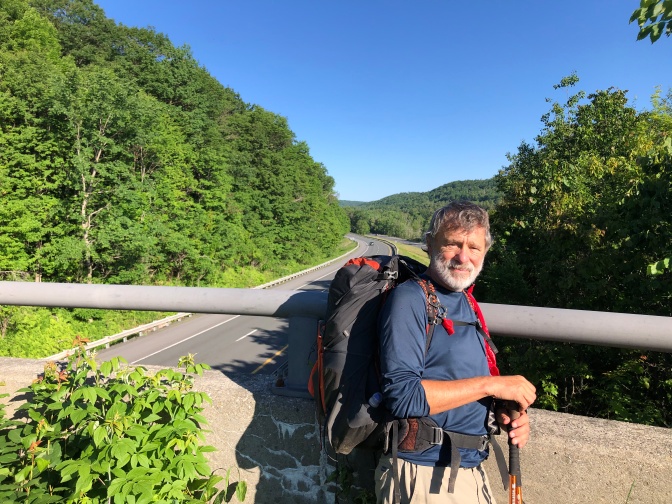 I was now due West from my original home in Upton Massachusetts. This is the Massachusetts Turnpike and interstate highway that runs directly through the town of Upton. I could hop on this highway and walk directly to Sharon Lovely and Gail Varney’s home to visit. 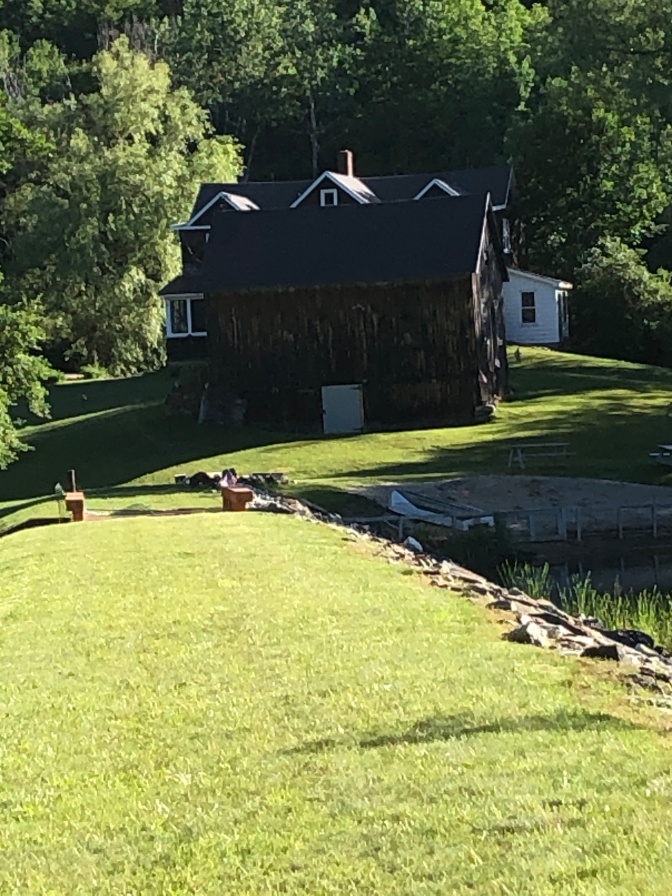 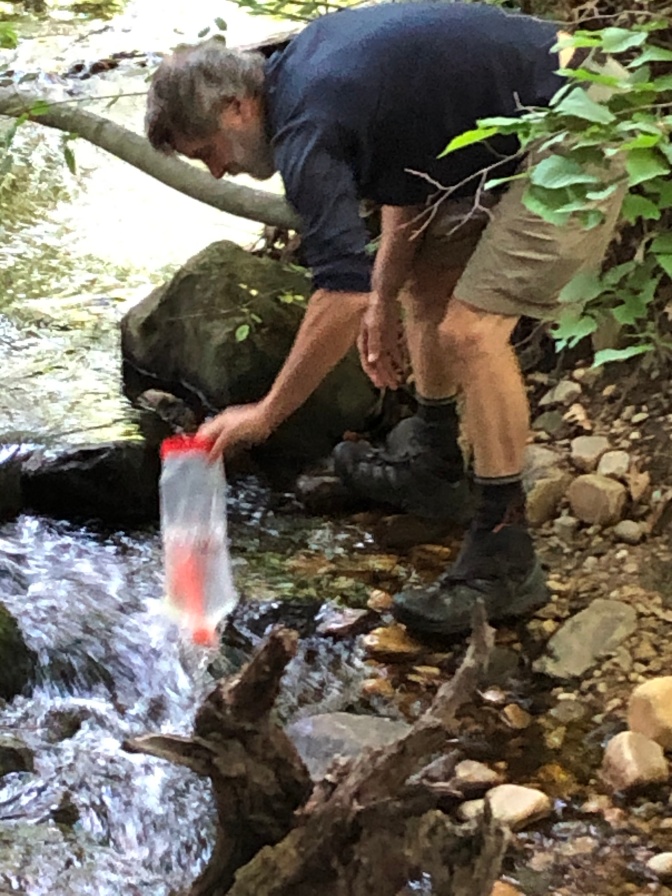 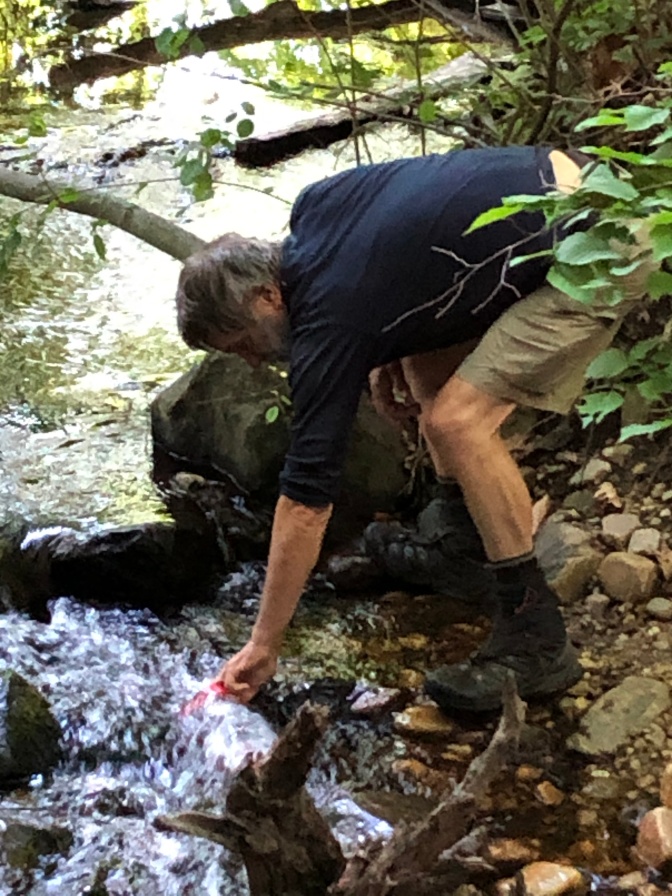 After crossing the interstate I came upon a New England farm house with a small pond next to it. The water looked clear and nearly pure so we worked our way to the outflow and went ahead with re-supplying our water. 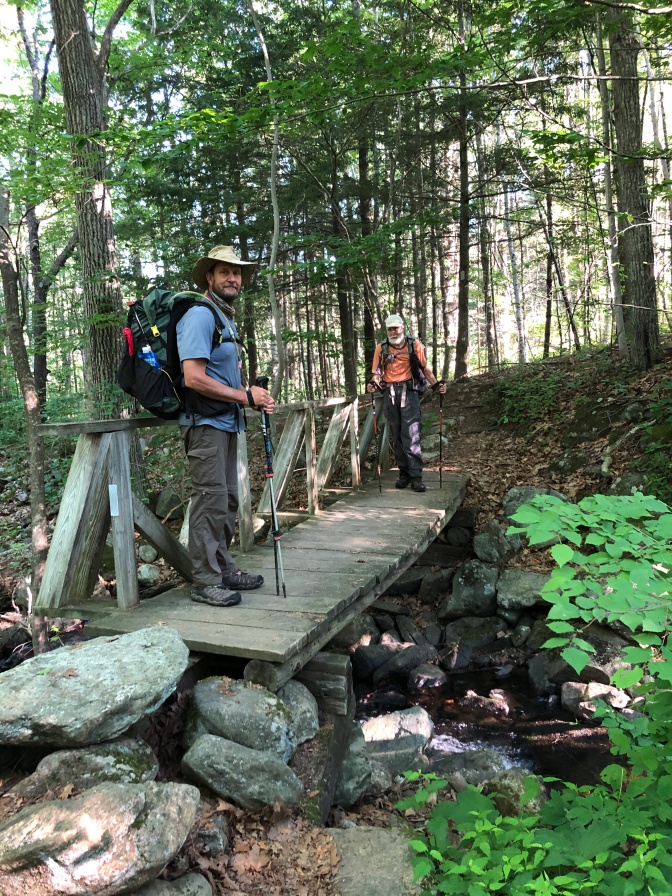 This picture is not the norm. It is very seldom that Hawkeye, Landslide and I can be seen within the same group shot. Both of them have a much better stride than I do and I always find myself soon lagging way behind them. At one point that was problematic for me but I’ve long since learned that I absolutely have to walk at my own pace if I have any hope of ever finishing this trail.  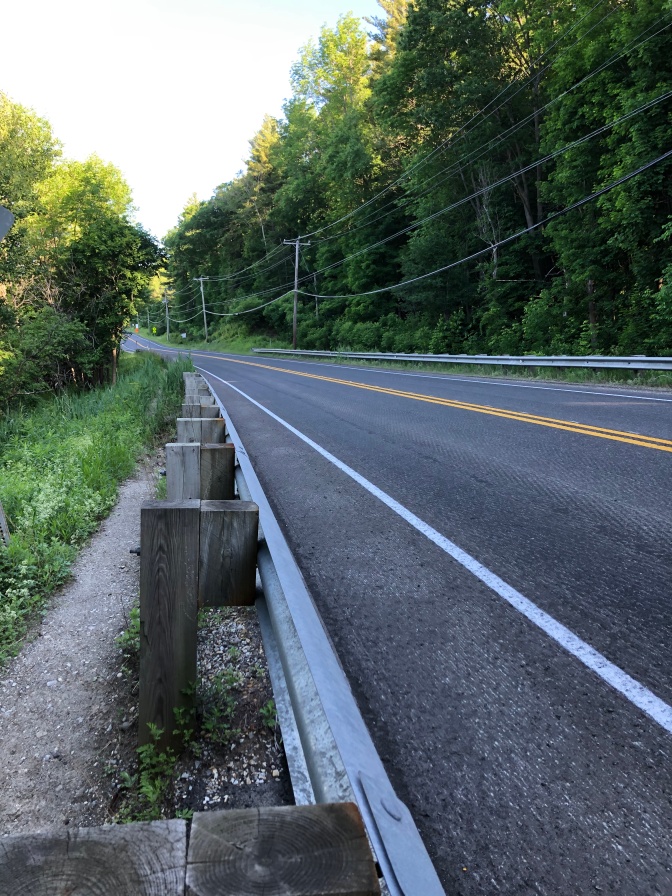 You may think that this is just a mundane US Highway. However this road has much significance in my life. It ran very close to my home and more importantly it contained a drive-in movie theater. Of course my only intent was to watch whatever movie was playing. Janet Dufault and I would often spend our entire night just going to the food stand for popcorn. There, of course, was no other intent while attending these movies.  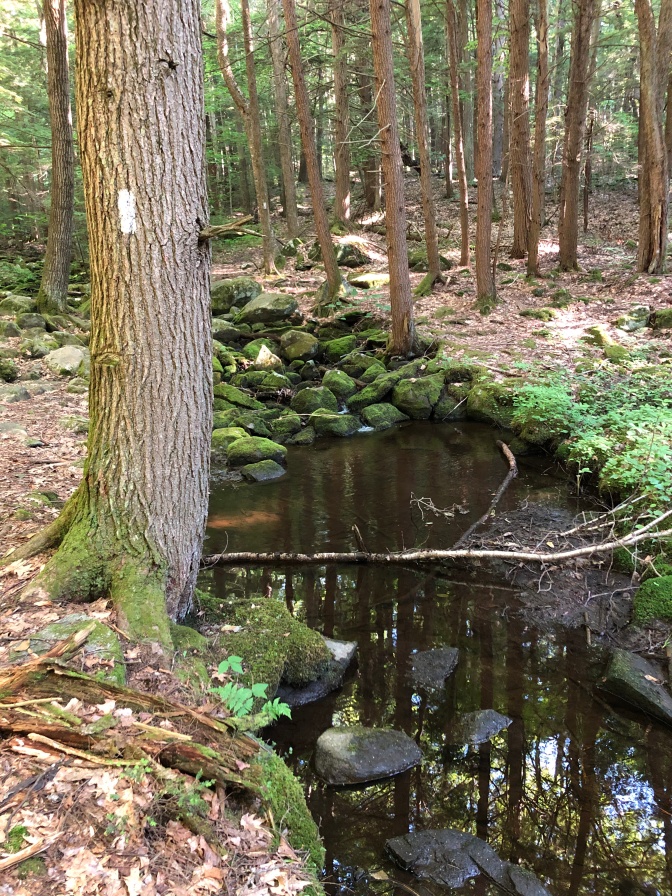 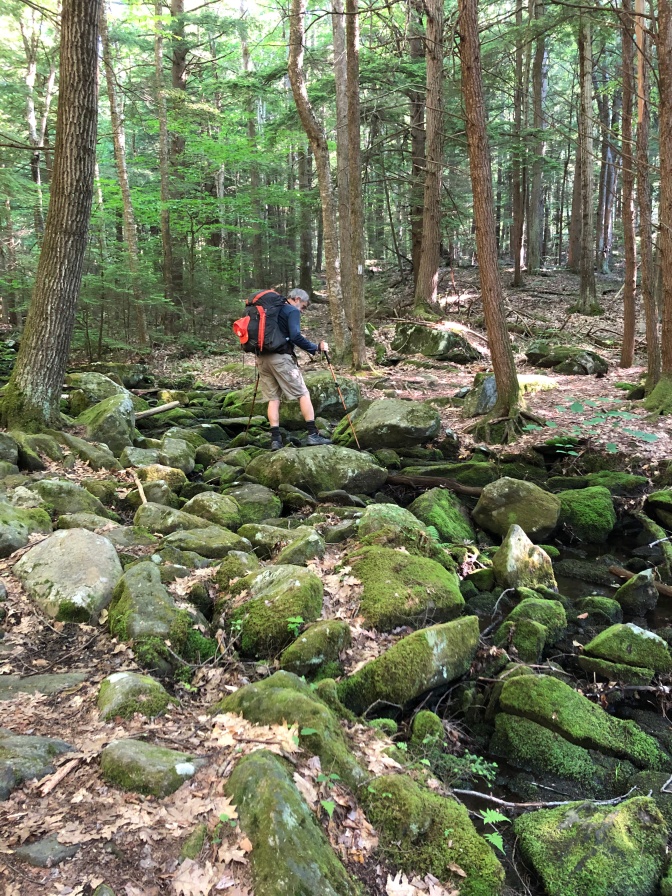 At times I feel like I have returned to the days that I am capable of rock hopping across a creek. However, on days like this my mind is totally on locating moving rocks. In spite of that I’m more than pleased that I’ve not fallen in. I know that it will happen….. but not yet.   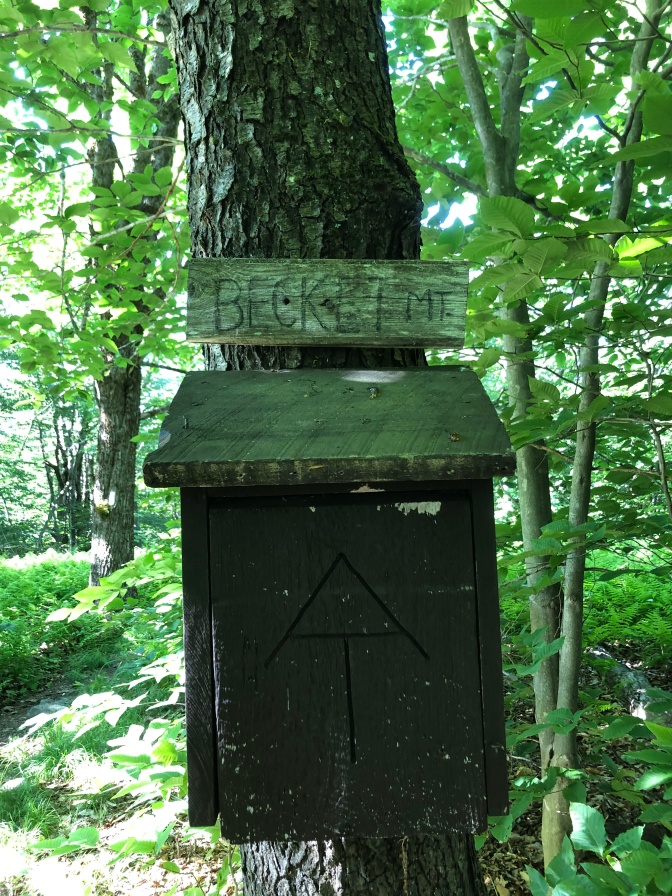 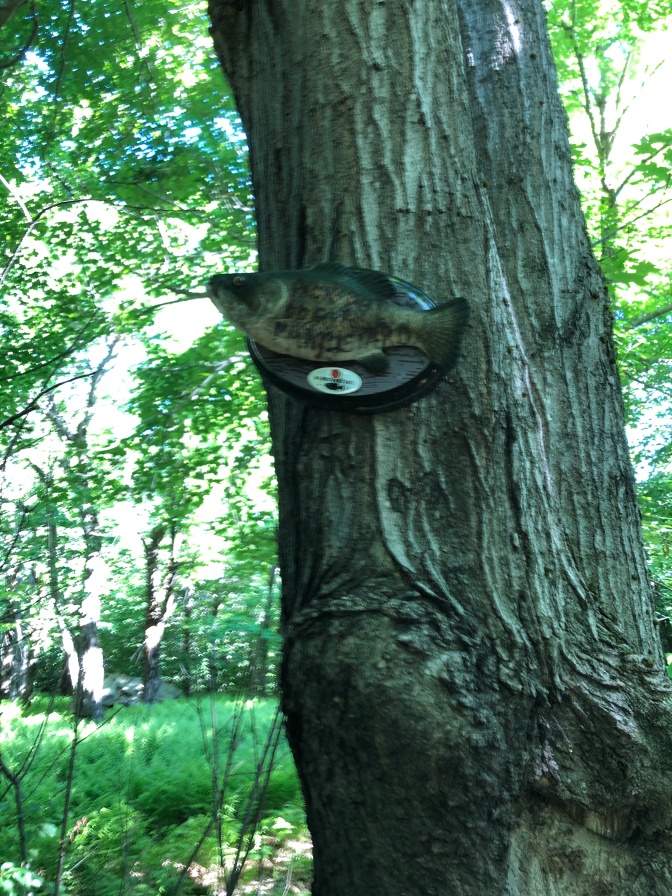 I had heard of Becket Mountain before but now for the first time I was actually climbing over it. Not only that they had posted a very unusual directional sign to show which way the Appalachian trail moved on. How often is it that you know to turn left because a bass was showing you the way.? 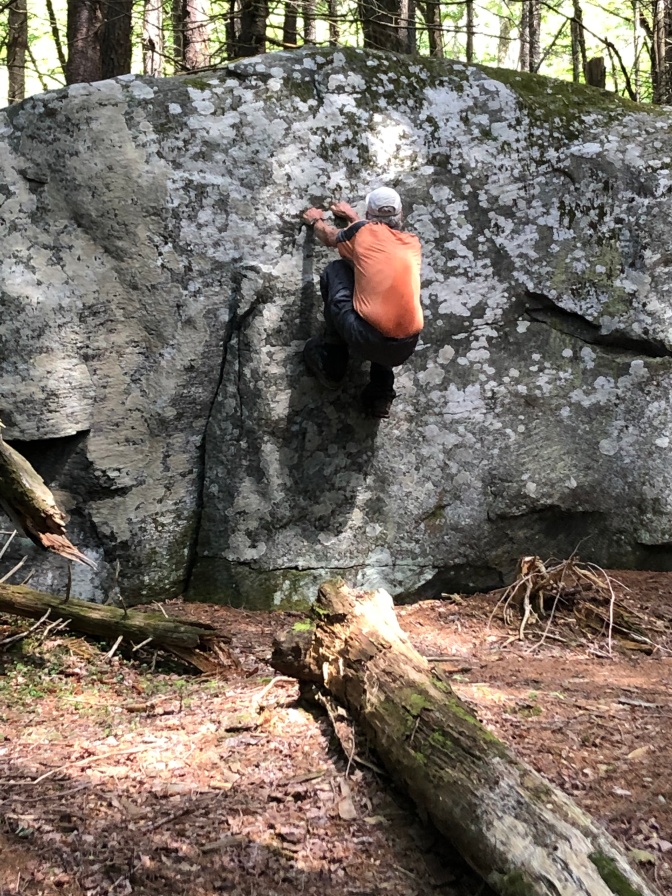 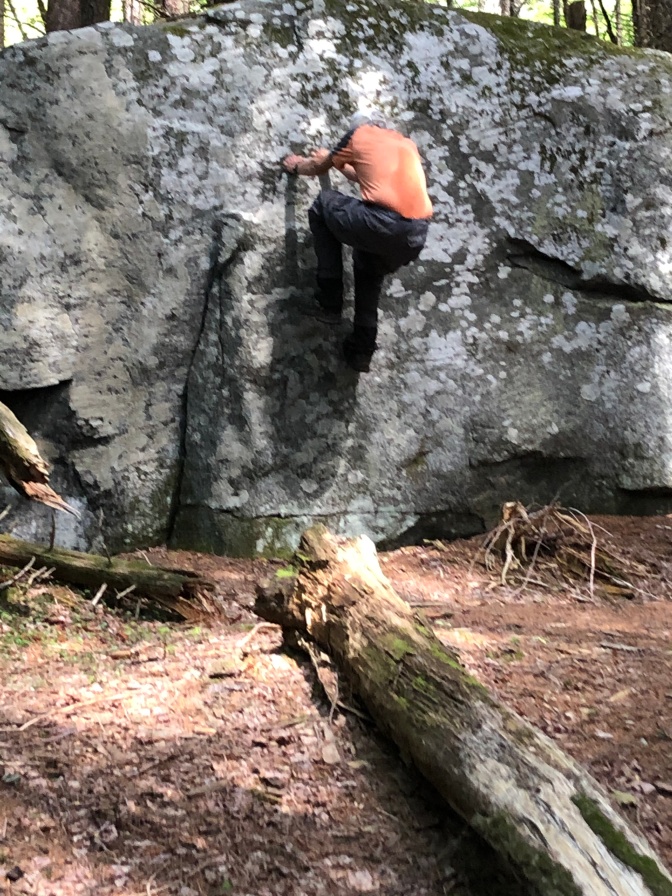 As I walked solo along the trail I suddenly picked up movement on my left. At first I thought it might be an animal so I slowed in order to see it before it was frightened off. Then I realized that it was wearing something orange and I knew that it couldn’t be a bear unless it had been domesticated. Upon closer inspection I found that Landslide had lost his mind, dropped his pack and for some unknown reason was attempting to climb a random boulder in the middle of the forest.   When challenged he responded that he did it because it was there.  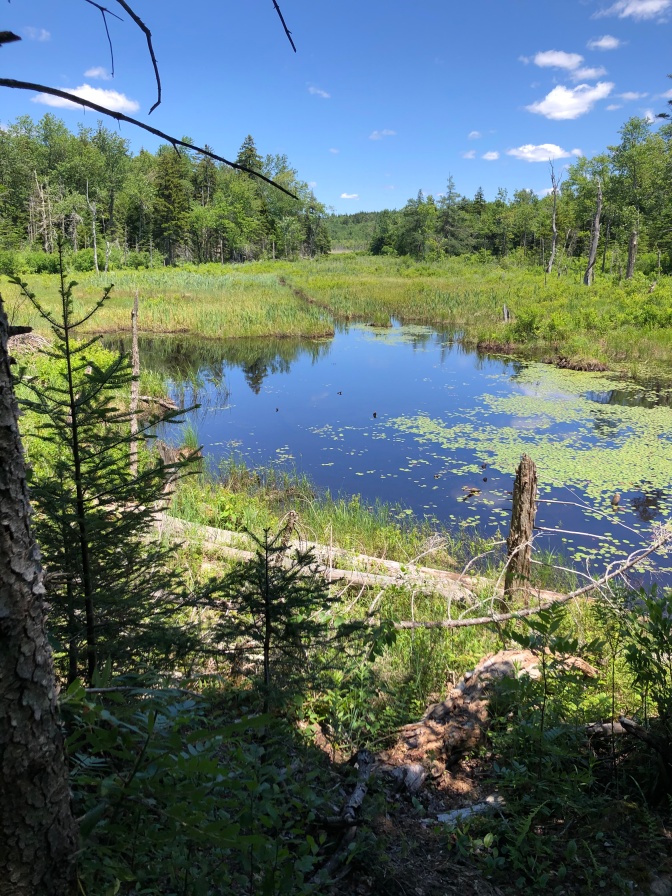 My hike returned to a total solo endeavor. By the time the lunch hour arrived I found a spot sitting at one of the many small ponds that exist in this part of the country created eons ago by glacial movement. The tranquility of my time spent along the edge of this pond was only destroyed by the thought of the lowlife pre-processed chicken that I was eating out of a package and slapping onto a tortilla that had been in my pack for at least a month.             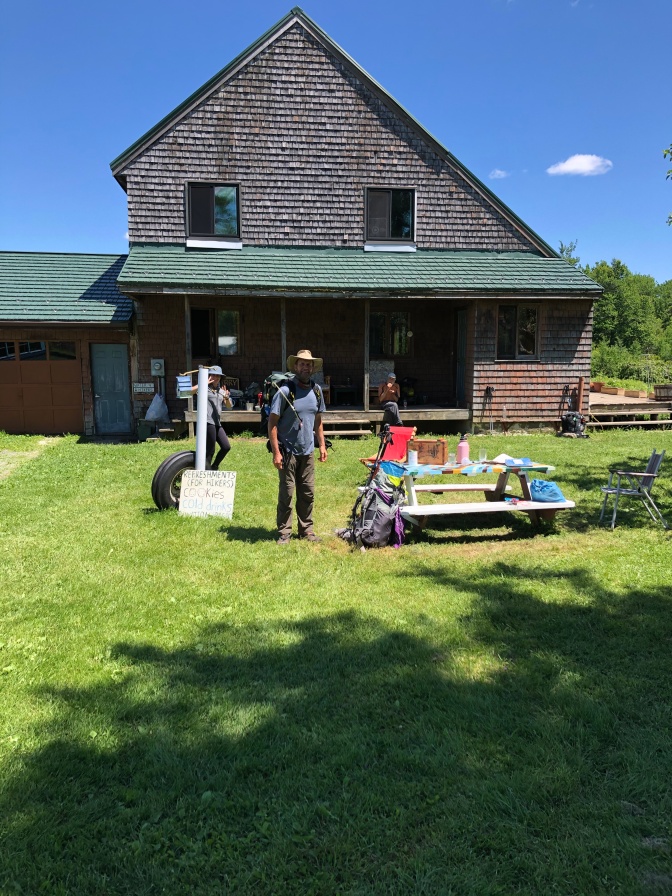 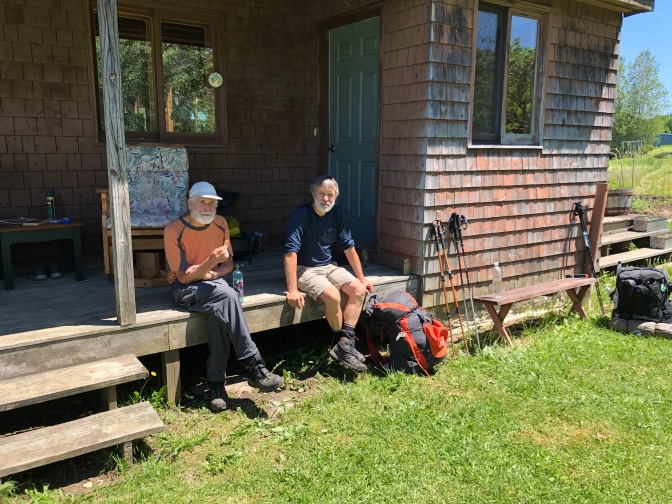 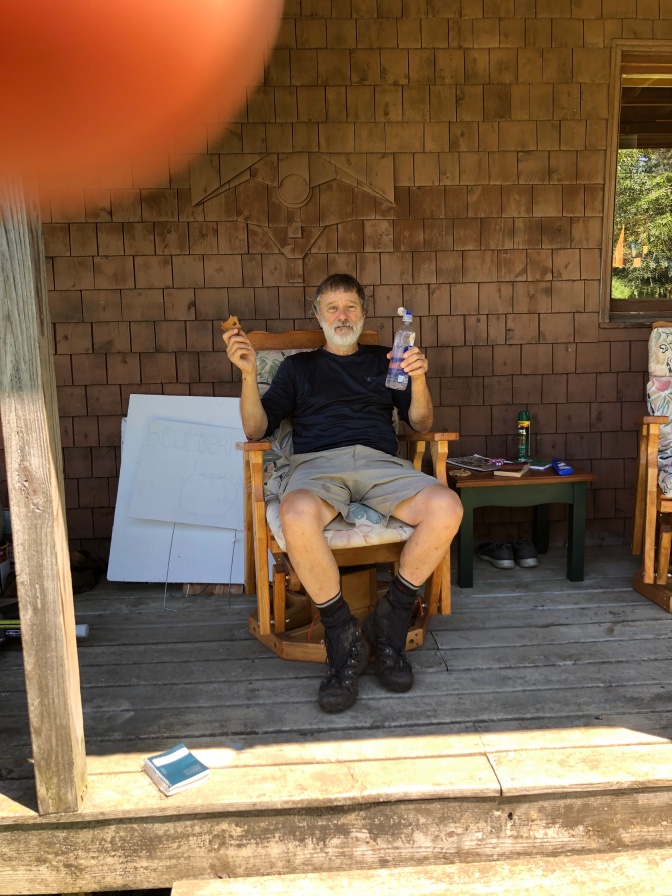 There is nothing better while walking a trail then to hear the rumor that there are cookies available within reach of the trail. That was the case on this day as word spread of this camper haven with a large box of cookies available for a donation or no donation. I made my way into the yard and immediately found Hawkeye and Landslide. They pointed out the proper procedure and within moments I had two cook   ies within my grasp.

The actual cookie lady has now retired and moved in with one of her children but her daughter still continues to run the farm. She is raising blueberries which she intends to sell in the local farmers markets. 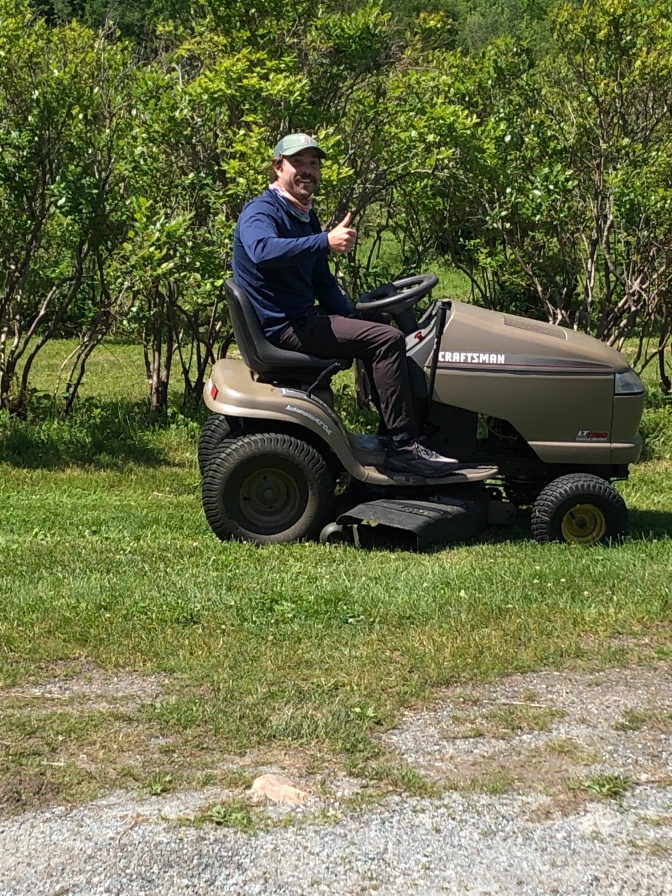 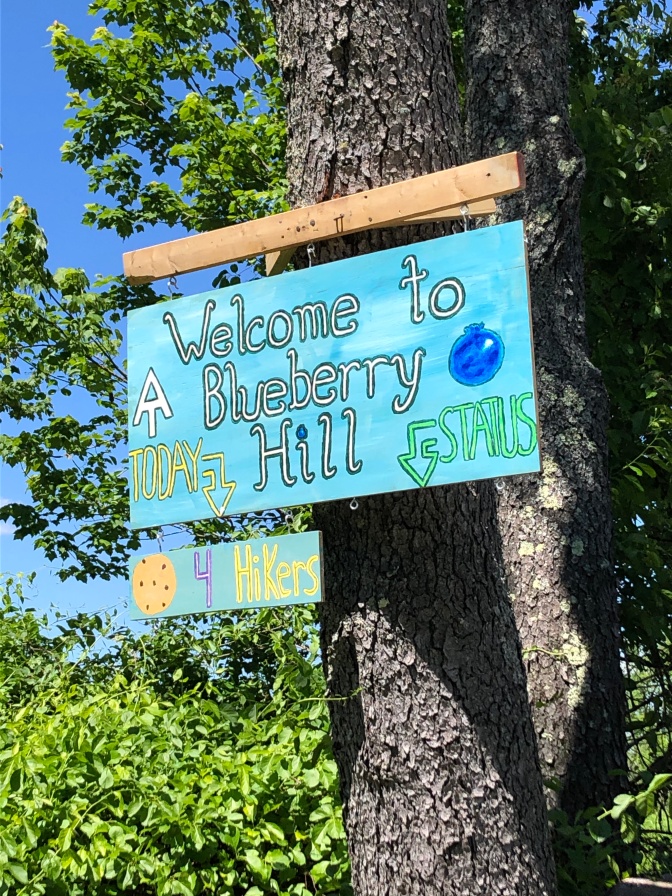 As I slowly enjoyed my cookies I could hear off in the distance a lawnmower slowly mowing the grass within the blueberry field. After a period of time the lawnmower came closer to where we were sitting. When it came into view I suddenly realized that Sauce was the driver. I figured that he had traded lawnmower time for hostel time but when I asked him later on he said that he had spent two hours on the tractor in exchange for a box of cookies. Obviously the cost of cookies is going up faster than the price of gas.   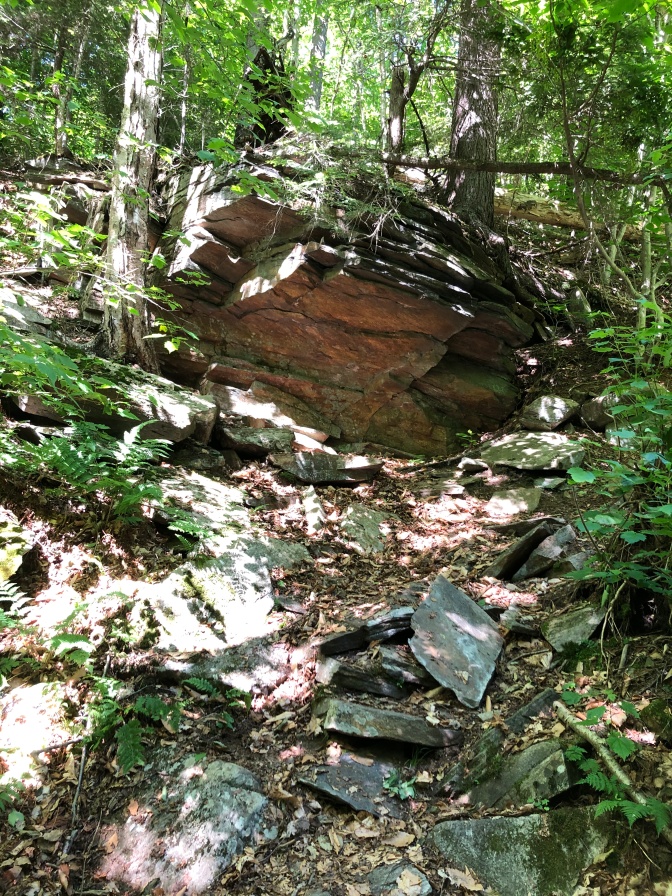 Granted there are less rocks here in Massachusetts however they certainly have not disappeared. 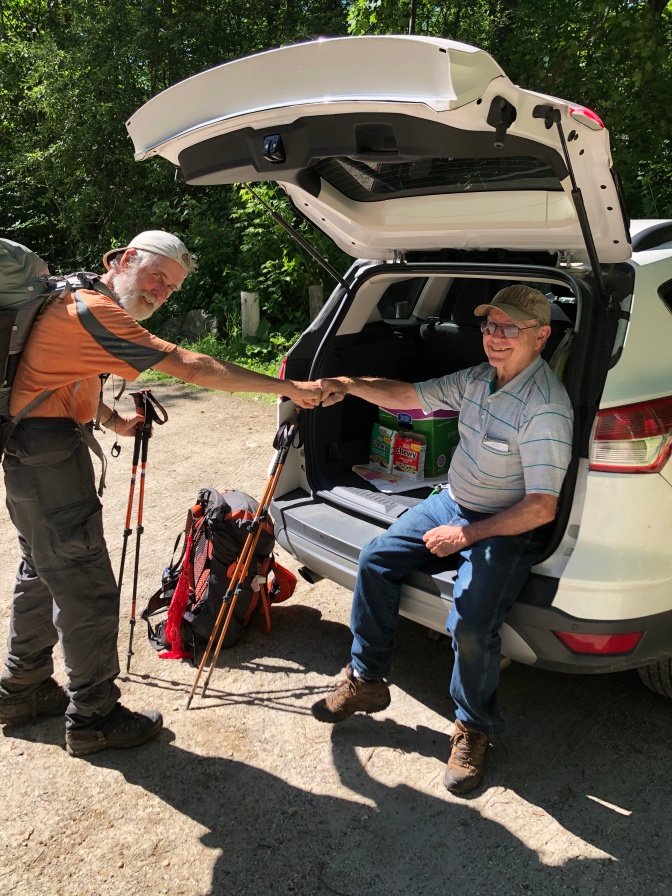 When I came out on the next road I found Richard who was providing trail magic for hikers. We had just received word that two bears had walked through the intersection so Richard had shut up his vehicle to avoid them. He quickly opened it back up once I appeared  . Soon after that Landslide appeared . 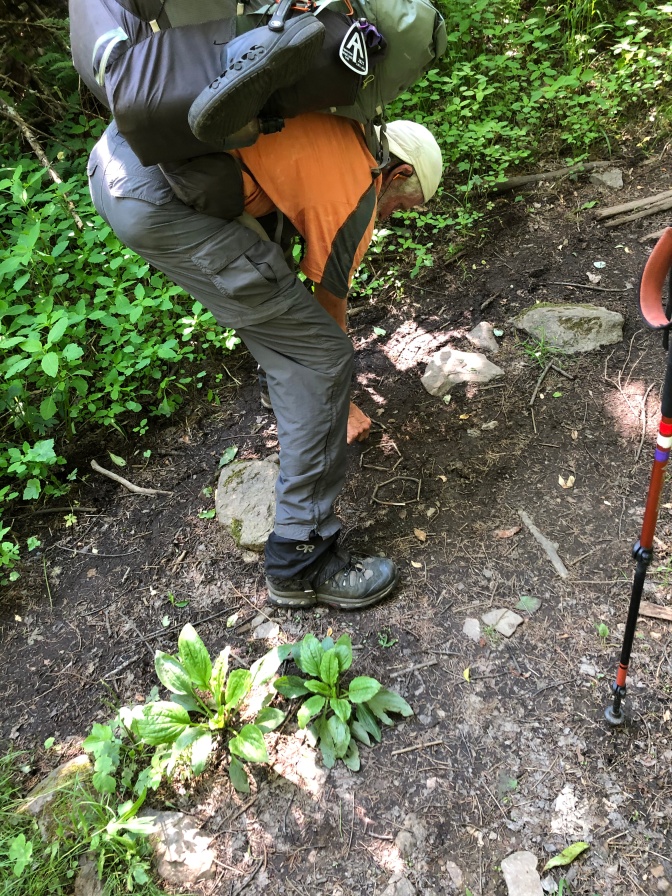 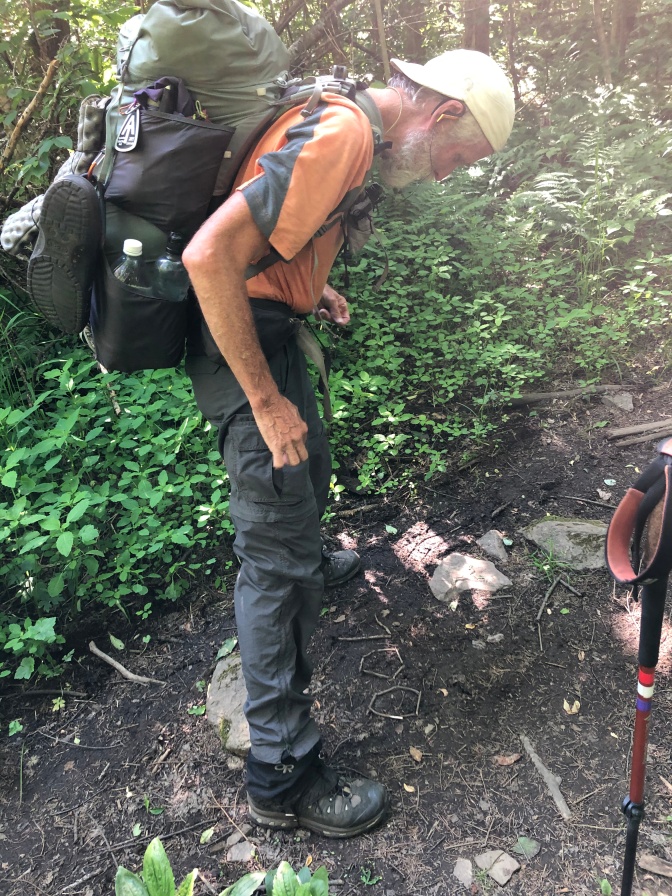 An hour and a quarter later I came around a corner and found Landslide leaning over. This time he was not attempting to climb a rock. I had to get up next to him before I realized that he was creating a 700 on the trail signifying the spot where he reached his 700th mile of hiking on this trip  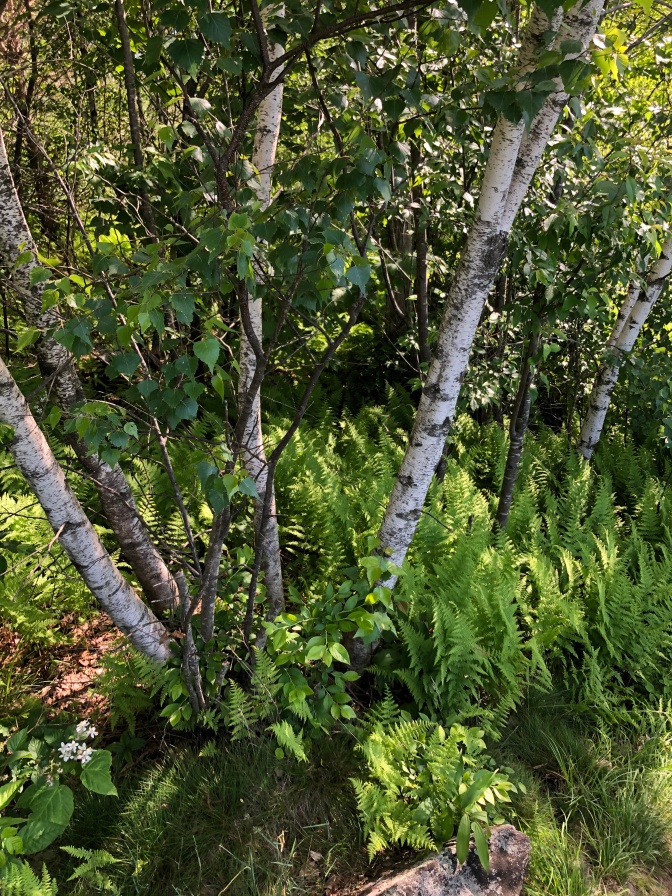 I remember when I was growing up that I always loved the white birch trees. I was always concerned because it seemed that most of them that I saw were lying deceased on the ground. I remember thinking that within a few years there would not be a white birch remaining in any of the forests. On this trip I have once again seen adult white birch lying dead on the ground. So during the span of my life what I have seen is a lifetime of dead white birch trees. Somewhere along the way they must have come back to life and waited for me to return before once again falling to earth deceased. Here you can see a small stand of young healthy white birch.    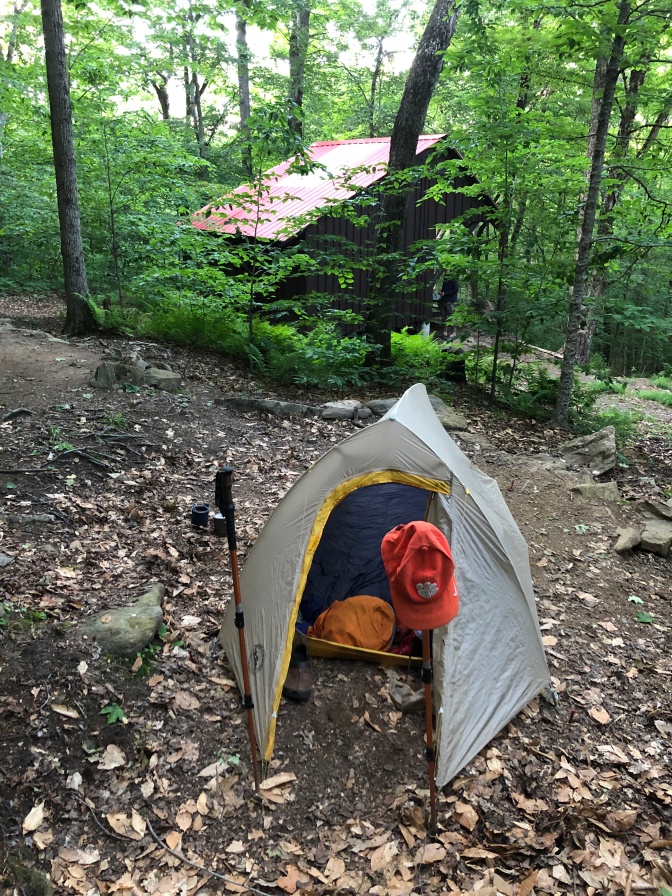 At 7 PM I wandered into Kay Wood shelter. Hawkeye and Landslide were already there and had their tents set up. The shelter itself was empty but I had no desire to set up in there mainly to avoid snoring and other noises. It turned out to be a great night although at one point in time the strangest sounds were being emitted from the forest around us. There was speculation that it may have been porcupines.   

It had been a great hiking day. 17.6 miles and cookies. The next day we would end up in town. Things couldn’t have been better which shows the inconsistent aspects of tackling this monster. Today was a good day to ‘hike on’.