I can honestly tell you that putting yourself back out on the trail after taking a zero is extremely hard.  One of the hiking sayings is that town makes you soft and I can tell that does seem to be true. Once you have been able to enjoy a soft bed or a good meal or not have to deal with brutal climbs it is very difficult to get back on the trail knowing that you will be doing this for days on end.  In spite of that the break from the trail had to end since we both knew that we had many miles to go. The next morning Kathy drove us back to the trail head where she had picked us up two days before. When we got there we came upon Grinder who was just getting to that trail head. Kathy ended up giving him a ride in order to get resupplied before she moved on and return to New York. . She is now an official Trail angel.

We took our first steps after the break at 10 AM. The first thing we had to defeat was a 1000 foot climb from the highway. I was shocked at how well my legs felt. The worry was that after inactivity for two days that my legs would be burning after the first hundred steps but instead I found that the rest had reinvigorated my lower extremities and I climbed the 1st mile and 1000 feet of elevation without stopping  . Those kind of positive hiking moments don’t come often. It was not long before I found myself struggling as we worked through the countless footsteps that it would take to complete this 14 mile section of the trail.

As most of you know I have always had a fascination with history and I now find myself in the original stomping grounds of Ethan Allen’s Green Mountain Boys. Formed in 1770 they were the militia in this area who took part in the capture of Fort Ticonderoga and later were heavily involved in the Revolutionary War .

The trails were once again becoming clustered with rocks and roots and the mountains we were climbing were once again reaching higher altitudes. Our upcoming challenge through the next three states was upon us and we need to get serious about the progress we are making.

The 1st mile climb up 1000 feet had me soaked in sweat so once we reached the summit I was immediately chilled with the soft wind that was blowing. No matter what I did I could not rid myself of the chill that was enveloping me.  When I reached the Glastonbury fire tower I was tempted to climb it since I had heard that there was a great view from up there. However, I was so chilled I had no desire to experience the increase of wind that I knew I would have to endure if I went up the stairs. I moved on.  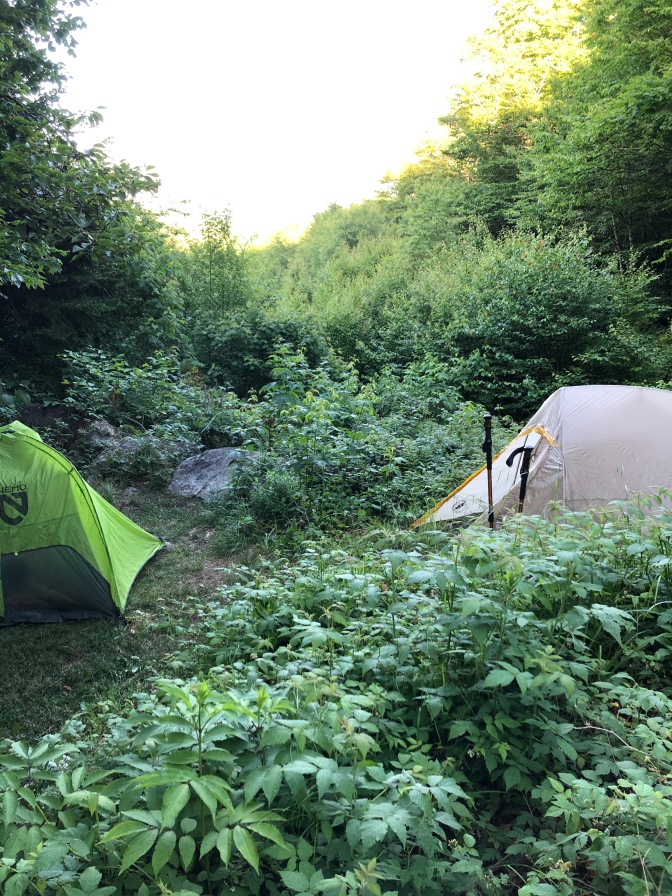 I pushed on badly needing to be at the next shelter in order to get my tent up and to feel the comfort of lying down on my air mattress and falling asleep. The shelter before my final destination was right on the trail so I pulled in for just a moment to take a short breather. There were about six hikers there. I talked to two of them for a few moments. It turned out that one of them was from South Carolina  and his wife worked as the librarian at the Berea, South Carolina library.

I was exhausted when I arrived at the Kid Gore shelter. As usual Hawkeye was already set up and he pointed out a small spot that might allow me to squeeze my tent in to the side of the mountain. It turned out to be just barely big enough and I found myself wobbling greatly as I attempted to put in the tent pegs on the downhill side of the mountain. But after a great amount of effort the tent was up and I was ready to cook supper.     One young man in particular was especially entertaining and he kept us all listening to his stories of the trail. He was one of those who leave you wondering whether or not you like him. His name was Gravy Train and he related that his family had emigrated to North America over the Bering Straight and he was not expected to be able to tolerate this heat. I finally went up and asked him to put out his fire because I was afraid that he was going to set my tent on fire.

I’ve since seen him many times and we’ve become friends…….he’s still shocking at times…..but humorous! It’s personalities like his that make this trail so unique and gives all of us the desire to “hike on” ….. even when we feel that we don’t have enough energy to take one more step.