Let’s Whoop Out Some Mileage

My solo night was refreshing after spending required shelter nights in the Smokies. I awoke at 02:30 thinking that it was morning only to find that the pesky moon was trying to make up for days of misery. I thanked the moon and fell back to sleep. 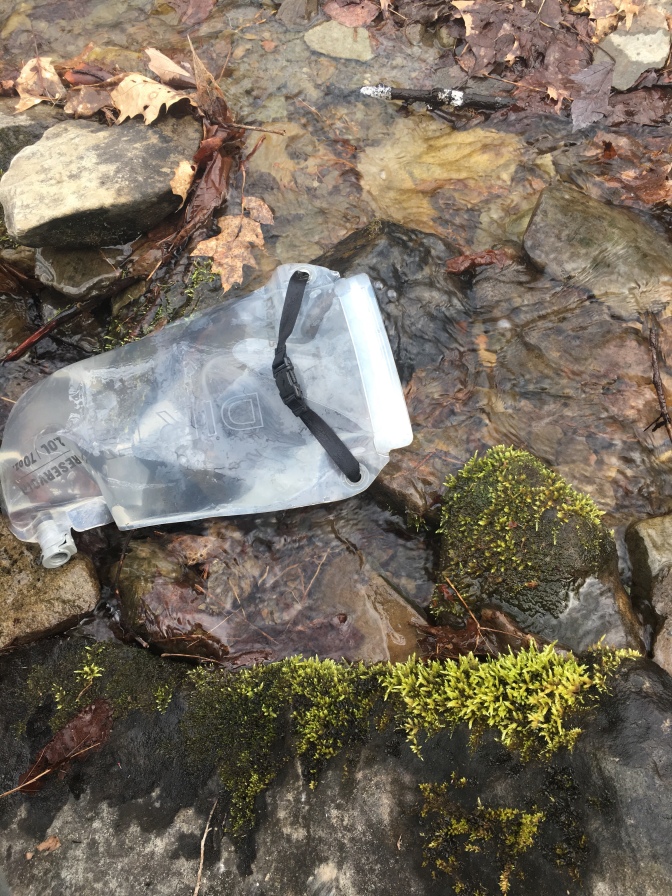 Within moments I had cooked up some apple and cinnamon oatmeal and downed the last of my water, I would have to stop at the next water source and fill up. The act of resupplying water is not all that complicated. It involves finding a water source and filling the “dirty” bag from it. I then carry the dirty bag back to my camp or backpack if I’m actively hiking.

The Act of Declaring Water Drinkable

Once that is done I hang the dirty bag and let gravity take over. A tube is attached to the dirty bag and runs through a Sawyer which filters the water and then pours it into your clean water container. In this picture the collector is my water bladder which slides into my backpack. I normally get a second bag of “dirty” water to cook with. So next time you order water at a restaurant remember some poor soul has been out in the woods in all kinds of weather gathering water through a tube for you.

Reunited With Bear Bait For A Moment

Now loaded down with water (2 liters is 5 pounds of weight) I moved on knowing that I was going to have to tackle Spanish Oak Gap, Snowbird Mountain, Wildcat Spring, Turkey Gap, Deep Gap, Brown Gap, and Max Patch summit before descending into Roaring Fork. Each of the gaps had a mountain in between.

As I was climbing I took a short break and suddenly saw Bear Bait coming up the mountain. As is her norm she had a smile on her face. She had just taken a zero day to meet with her mother and grandmother at Davenport Gap. “Guess what,” she exclaimed. “I’m no longer Bear Bait. I’ve lost and broken so many spoons that is going to be my new name. To celebrate my Mom bought me this very great wooden spoon. I’m going to carry it to Maine. I’ve emailed the artist who made it to let him know what his spoon is up to. ”

She held up a giant wooden spoon that could have been used as a weapon to ward off an army of thousands. I was very impressed as our laughter echoed through the valleys below. She moved on a moment later with promises to meet again in Hot Springs. She arrived at me Bear Bait and left me Spoons. 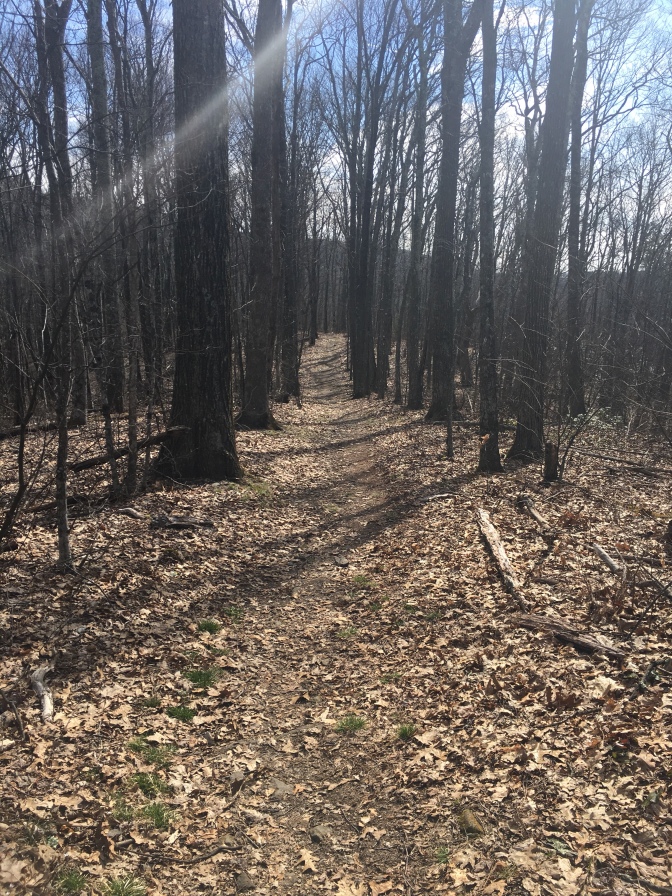 Celebration of a Ridge

Alone again I walked on. It’s always good to see tramily out here even if it’s only from a moment. Just like real family they grow up and develop responsibilities of their own. A visit is a gift and time has become minimal. As she walked away and I saw the back of her head I knew that there was a smile on the other side. I’m going to miss that girl when she’s 100 miles in front of me.

Finally I made it to the peak of Snowbird Mountain. It was quite a climb but I was rewarded with a view behind me of what I had just survived. They seemed to mock me with sunlight over them but I got the last laugh. They didn’t get the Honey Bun and a Coke!

What loomed in front of me was a long series of endless mountain tops with fewer switchbacks. 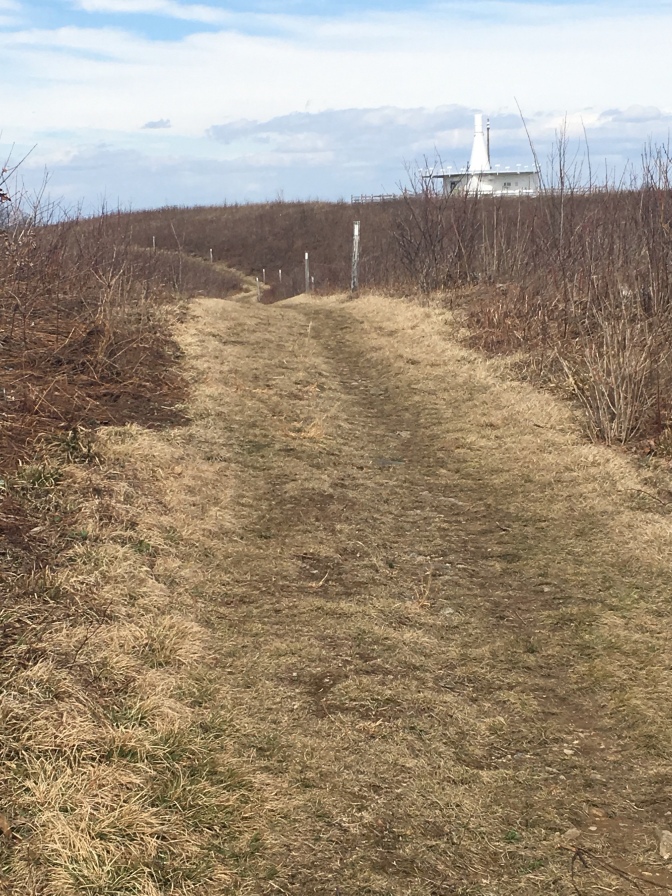 I turned and took a look at the trail just traveled. Posts with the white slashes marked the way. Off to the right was a FAA communication tower.

Miles later I finally reached Max Patch. I quietly hoped that someone would have trail magic at the base because I was low on decent tasting food. But no…. the dirt road was empty. Instead I had to face this battery of steps leading to the summit. I had just met Mel AKA Butter Knife and she was sitting on the side of the trail. I knew that she would not like the look of these stairs. I tackled them one at a time gasping for air with each step. My reward? A cold blast of wind and a grim reminder of life at Clingman’s Dome without the snow. I scurried to get my jacket back on.

The View Back Toward the Smokies

Through the wind I could see rain clouds chasing me. Great! The Smokies were wanting revenge for that foraged Honey Bun. I best be moving.

I worked my way over the summit anxious to be clear of the wind. So far the supposed highlights of this hike had proved to be places to avoid.

A Small Reprieve From the Wind

It was small but any break from the wind was a blessing.

Off to the Right Was Yummy Snack Food

As I progressed on the Patch I saw a Mom and her son sitting in the hiking track. As Yoke would say they were both rather “thick” sitting there in their short sleeve shirts. Around them was a smorgasbord of all kinds of food. There was enough for King Arthur and his Knights of the Round Table. I greeted them since they were sitting in the trail. I was talking to them but looking at all of that food that could have fed the entire next Shelter. “What are you doing?” asked the boy. I told him that I was hiking the Appalachian Trail. “What’s that?” he wanted to know. “It’s that rut in the grass that you are sitting in”. His mother helpfully added that I was walking in the woods. “Oh” said the boy unimpressed as he picked up a handful of Oreo Cookies. I tried to looked starved and on my last leg which was not hard because I was. They didn’t budge. They were not getting off my trail and they were not giving up any of their grub. I walked around them my hunger deepening. I needed to put them behind me.

This trail came at the right time. Visions of Walmart were squeezed from my brain and I was brought back to the simplistic sounds of the trail. I was glad that they were out there together but they could have at least surrendered an Oreo or a slice of that cheese. 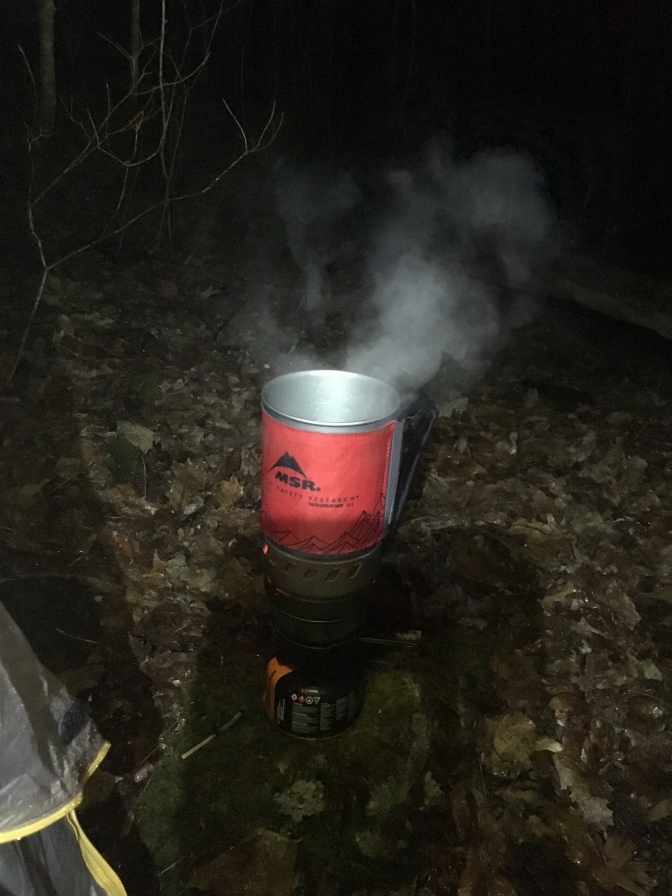 The Storm Was a Coming

I scurried past Roaring Fork Shelter eager to be solo camping again. At 7:30 I found a spot big enough for my tent. After excavating the site of rocks and sticks I put up the tent and got water to cook with. I was whooped. My gear in the tent I sat down next to my cook stove. Now for a leisurely meal of Beef Stew. It was brewing and would only take a moment. The cocoa powder was right next to it waiting for its share of the hot water. It didn’t allow a warning drop or a sprinkle. It didn’t give a warning of a slight breeze. It began with a torrential downpour like the green slime they used to pour on TV contestants on game shows. It surprised like the sudden attack of Gatorade poured on the winning coach at the end of a game. I scrambled inside soaked letting the stove finish boiling water for supper outside the tent. The Smokies caught up with me and it made me pay for it all night. Dang them Smokies!