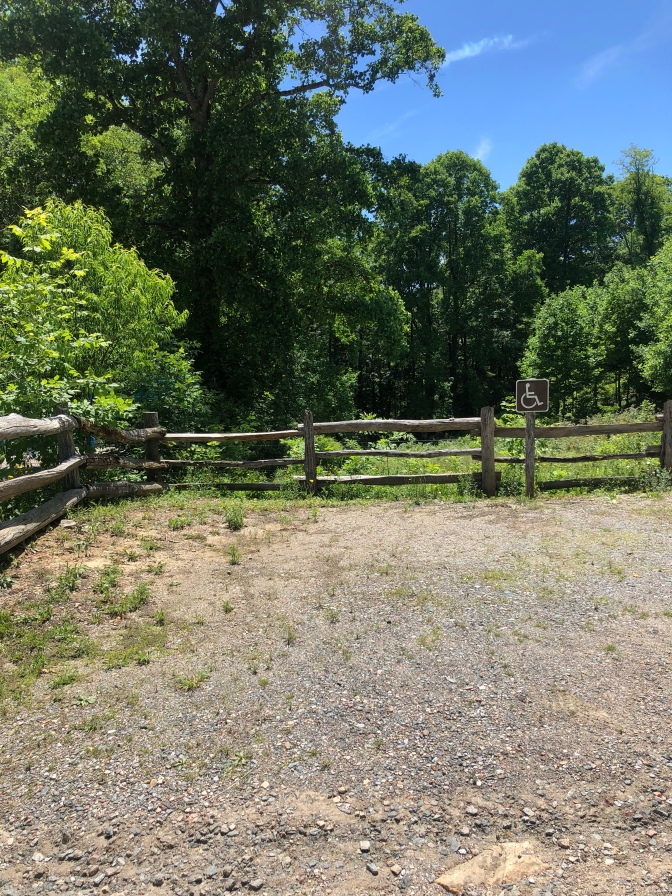 What A Difference 51 Days Make

My last time I was here was a sad day. 51 days ago I left this spot not knowing if I would be able to return. It was leafless and cold and rainy that day. My return was greeted by full foliage, green grass and birds singing. Questions remained about my durability but the environment was primed for success. With the help of Bill Chiles and P.R. Johnson I’m back on the trail. PR suggested K Laser treatment and after talking to Bill and with his agreement I opted to go with that. The first treatment the first day knocked out most of the pain.

The Same Spot 51 Days Ago

I cant tell any of you that I was actually excited to be back. I was now facing 1,744 miles with a tentative back. Once Jan drove away it was a no turn back situation. It would be all North from here on out.

On the third day PR had knocked the pain out of my leg when he noticed that the circumference of my left calf was one inch smaller than my right calf. “This is a lumbar spine problem” he offered. That didn’t sound good to me. I’d never had back pain. Sure enough…. films revealed a lumbar spine that had been rode hard and put up wet. We had discovered the actual hitch in my giddyup.

Handicapped Garland Was About to Climb This Ramp

The smells were clean and fresh. The temperature was perfect even though it was 3 pm before I would begin my hike. Part of me was stalling…. part of me was ready to go.

PR began back adjustments along with K Laser to my lumbar spine. The progress was fast. He told me that this normally takes three months. I believed him but I’m a bad patient. With no pain I put the pack back on and Jan and I attempted a six mile hike. I made it four. The pain came back. 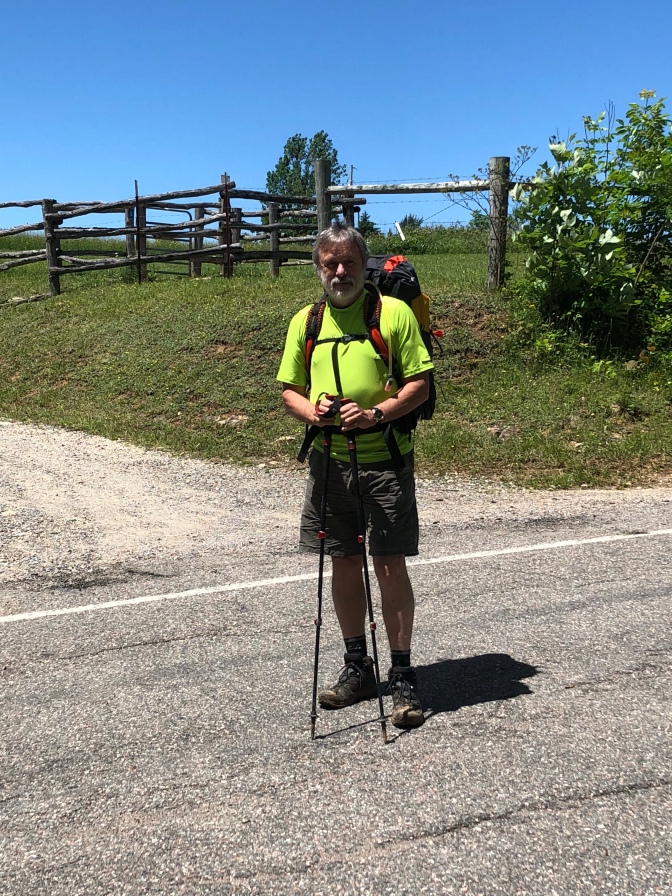 Retread….. AKA Defib at the Point of the Touch

I had returned to the exact spot that I had ended on 51 days before. My purist blood was intact. Northbound and no spot unhiked.

I returned to PR. We were both disappointed but we began again. We were still ahead of the game and I rallied quickly. This time I worked on being patient. It was like being caged.

The difference in terrain and weather was enormous. The hike began with the smell of pastureland and the feel of a gentle uphill grade.

Three weeks after the relapse I tried again. First seven miles with no weight… then seven miles with the 27 pounds… then Jan and I did almost 11 miles with packs and elevation changes. No pain. It was time to go back out. PR and I have looked at this realistically. He still recommended the 90 days because my back muscles need to be retrained. I agree with him but……there is a chance and the year is passing. This will be on me.

I Have Hung Out Here Way Too Long

If the AT was a 50’s Rock n Roll record it would be one that had a scratch in it. Some of you remember that. The needle would hit the scratch and hang up…. 🎼… Be bop…..be bop…..be bop. “Someone move the needle!” No response. Finally you’d get up and fix it. There’s no way I’m throwing that record away.

A half a mile up the handicap trail the gravel ended. It once again became a trail. I took a moment and a picture. I needed to make sure that this handicapped section didn’t pertain to me. 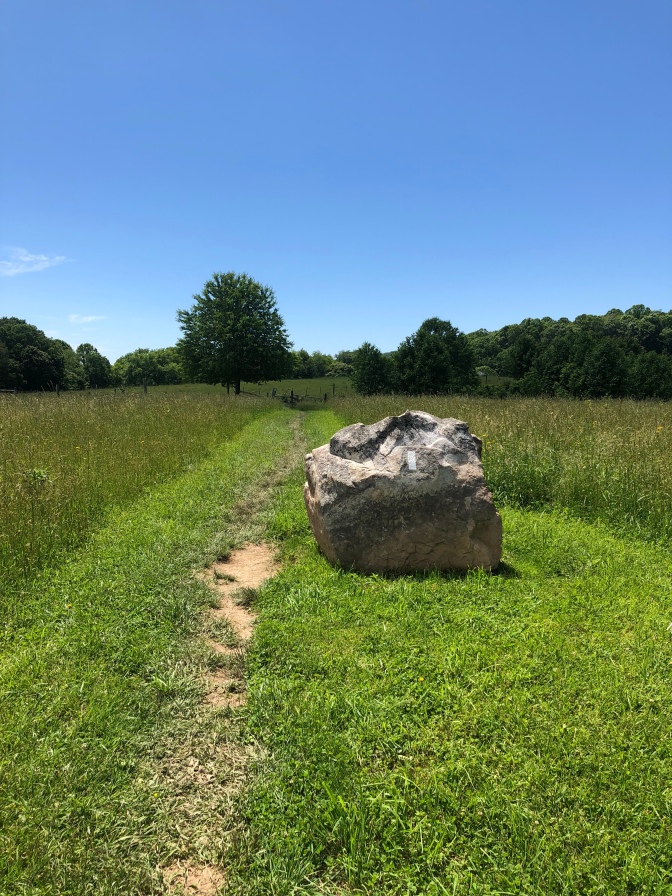 By Now I Knew That I Was Actually Hiking Again

I suddenly found myself walking through this herd and dodging cow flaps. I can’t do this hanging out on my couch.

Oh! This was How It Was Supposed To Be the First Time

I took several moments along the way to take in the views. This was the way that it was supposed to be like. You know…. the way it’s advertised in the flyer. Perfect weather, beautiful views, no injuries, no difficulties.

I Thought That I was In The Smokies

I had not passed a soul. The hike bubble was long gone. I felt the loss. The tramily was out of reach. I felt like a caboose that had been disconnected from the train. Then I remembered….. they don’t use cabooses anymore. This would be an adjustment. Finally I came upon a father and son hiking Southbound. The son was in misery. The father was overjoyed and wanted the son to enjoy it too. The son appeared to miss his video game. Dad said that there was a Northbound thru hiker just ahead. I moved on. 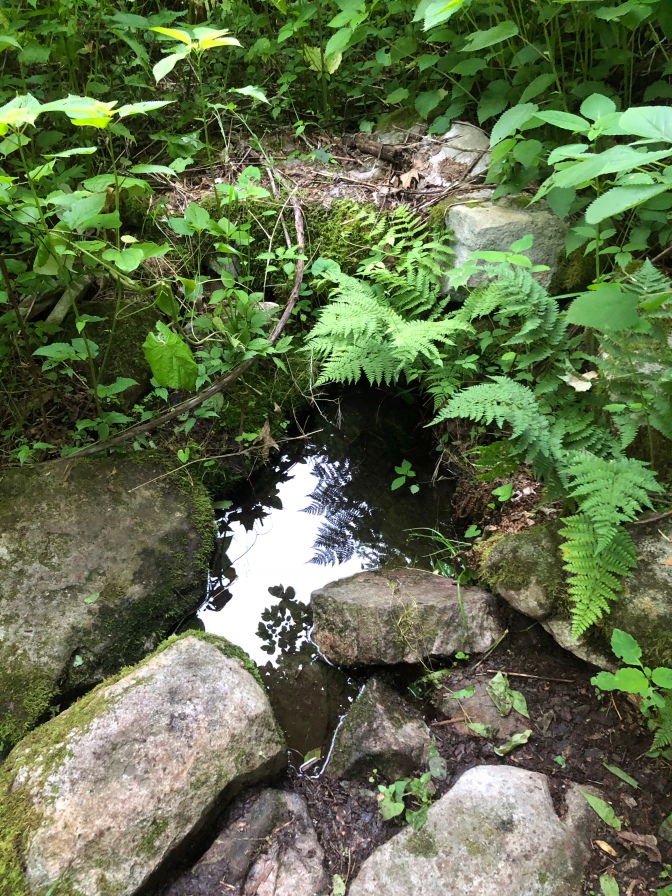 Sure enough …. just ahead I caught up with a hiker who immediately pulled off the trail so I could pass. I thought that was humorous. If it was alive I had passed nothing for two months. Then I saw her AT tag. 818 or there abouts. She had begun only a week after me. She was still out here plugging away. She was called Danish. Yes….. she was from Denmark and hiking solo. We spoke for awhile and then I moved on. When I stopped after 8.7 miles I set up camp. It was after 7. In about half an hour she appeared. “Do you have room for a second tent?” Soon our tents were up and supper was cooked. The night temperature was a comfortable 60. I slept like a baby. Tomorrow we would hike on.