As soon as I awoke I realized that this day would be better. In spite of the cold wet I had slept solidly. I could hear birds all around me as I organized my equipment inside my tent. They seemed happy so I decided that I might as well be.

09.45 The Weather Was Better But in the Early Morning Hours It Was Wise for Me to Stay Away from the Edge

Oftentimes when I first get going in the morning I deal with a bit more unsteadiness than later in the day. The activity will sooner or later allow me to return to my new norm but early in the day I tend to stay away from the edge of cliffs.

As I worked along the side of the mountain I came upon an older couple from Arkansas. They have been coming to the AT each year and doing 100 mile sections of the trail. They sound like Jan and I. He decides which way to go. She hikes. Over the few days I saw them several times so they must be doing ins and outs. 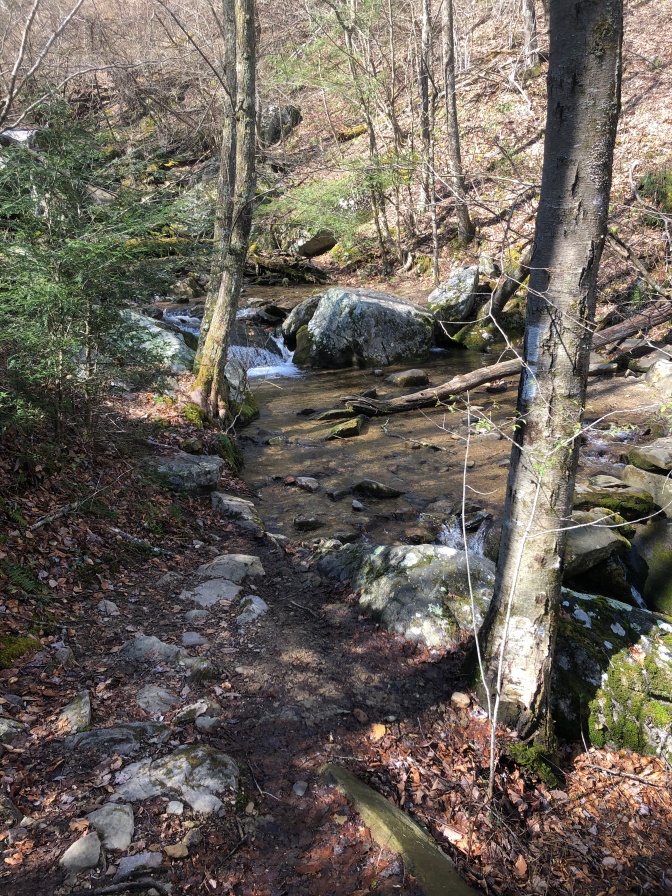 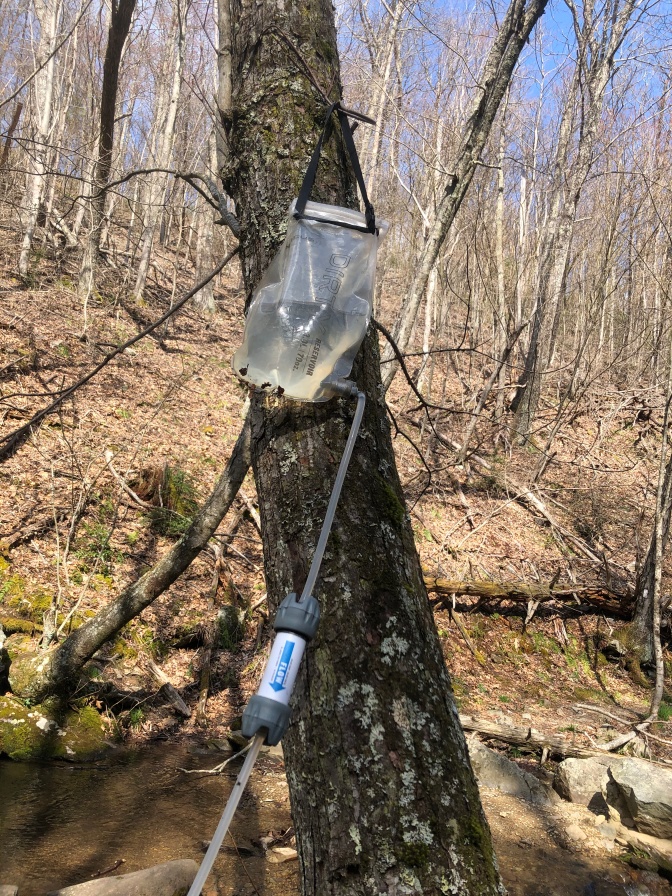 I was still not quite over my little out of water mishap of the previous day so when I finally reached Ivy Creek I stopped and took the time to resupply.

Many use a hand filter to fill bottles but I still prefer to use a water bladder with a tube to drink while I’m hiking. Then I get cooking water at the nights camp site. The problem was I had used my drinking water to cook with the night before,

So……. empty the backpack….. remove the water bladder….. fill the water filter bag from the creek and filter it into the bladder. Once you repack the bag a significant amount of time has passed. Time that you need to spend hiking.

11:21 The View Toward Elkton, Virginia

I was beginning to drag when I suddenly popped out into one of the Skyline Overlooks. There was a lone vehicle sitting there in the cold and as I approached it an individual got out and asked if I was a through hiker. When I let him know that I was he opened the back of his vehicle where I found fruit, snacks and drinks. A cold Sunkist Orange did the trick. I stuffed my pack with oranges and cookies and was soon back on the trail refreshed. His name was Karhop and he had done the trail last year and wanted to give back. I was sure that I would see him again. 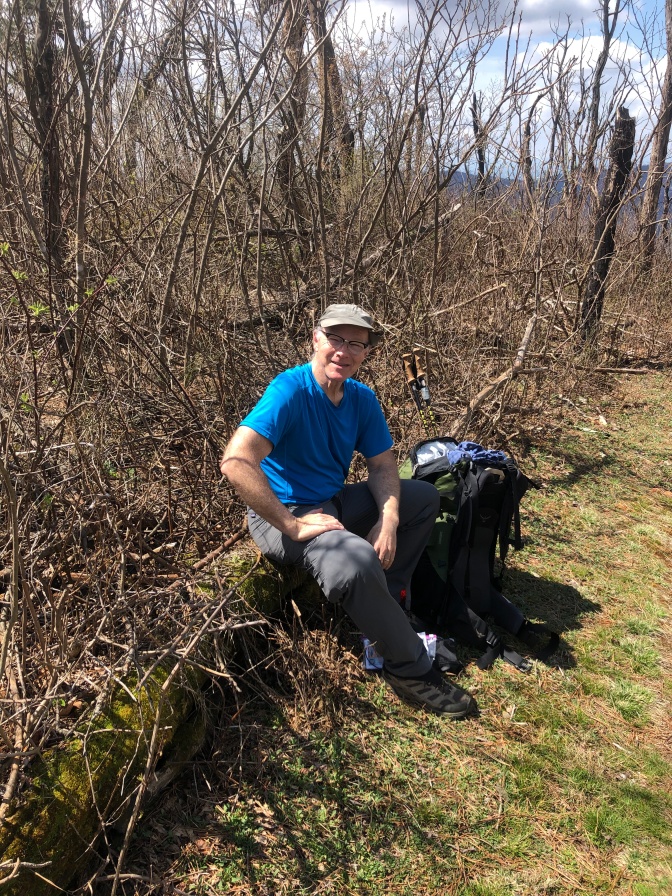 12:37. Donald: Formerly of Maine and Massachusetts, Now From Richmond, Virginia

Moments later as I was climbing I came upon Donald who was having himself a snack. The moment we spoke he asked me how far out from Boston I lived. I told him that I had lived in South Carolina for 55 years. “Nope, you’re from Boston!”, he replied. I could have sworn that I’ve been living in South Carolina. 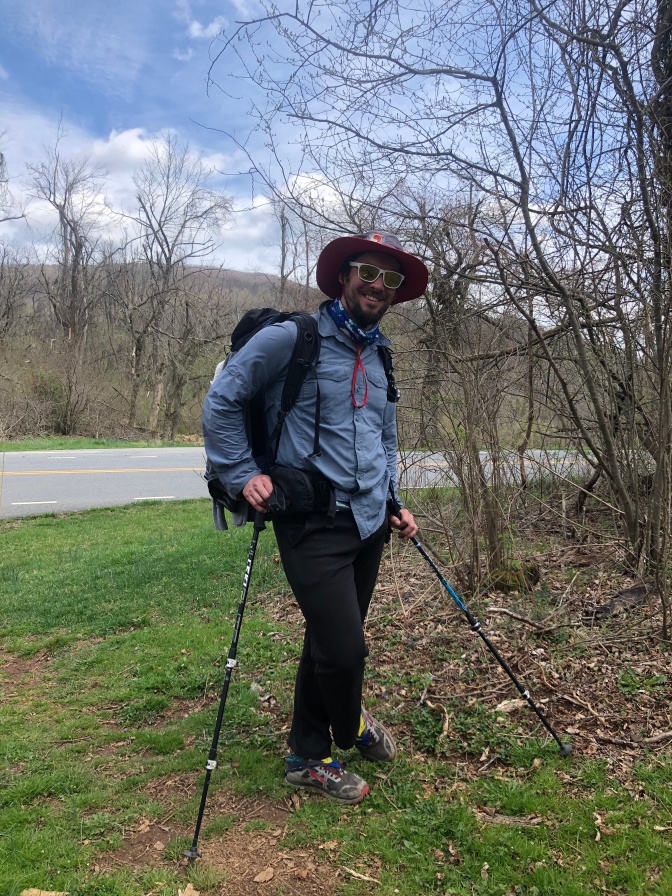 As the day progressed I realized that my thumbs and index fingers were burning. In spite of the cold and the rain my fingers where I was holding my poles were getting sunburned. I rummaged through my personal stuff bad but all I could come with was ointment that we use when we end up with rashes South of the Border. It works well there…… what the heck …. I’ll try it. As I was applying it this fellow approached me walking Southbound. “Do you need sunscreen?”

I asked his name. “Comfy ” he said. He said everyone told him he looked comfortable in his stylish hiking clothes. 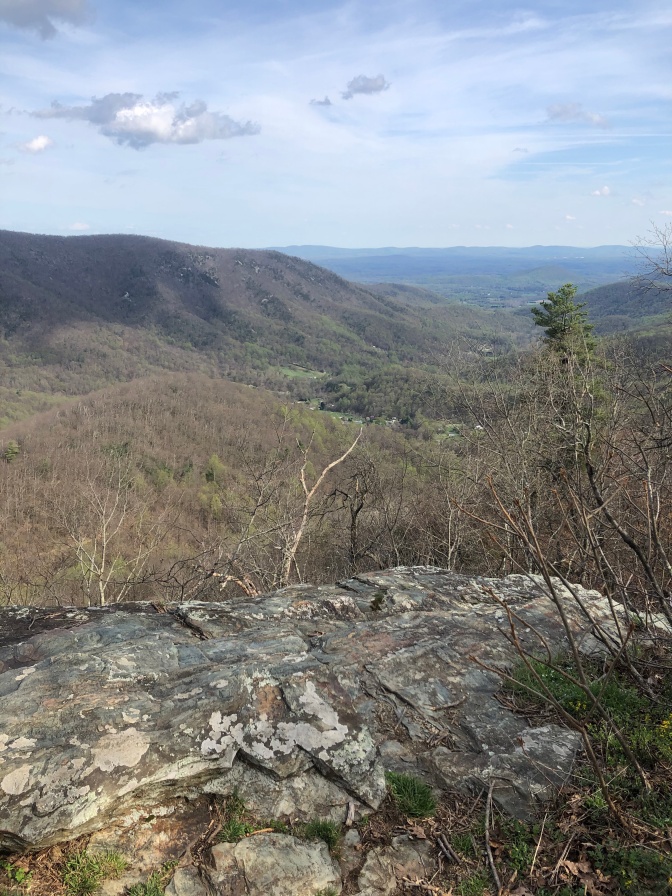 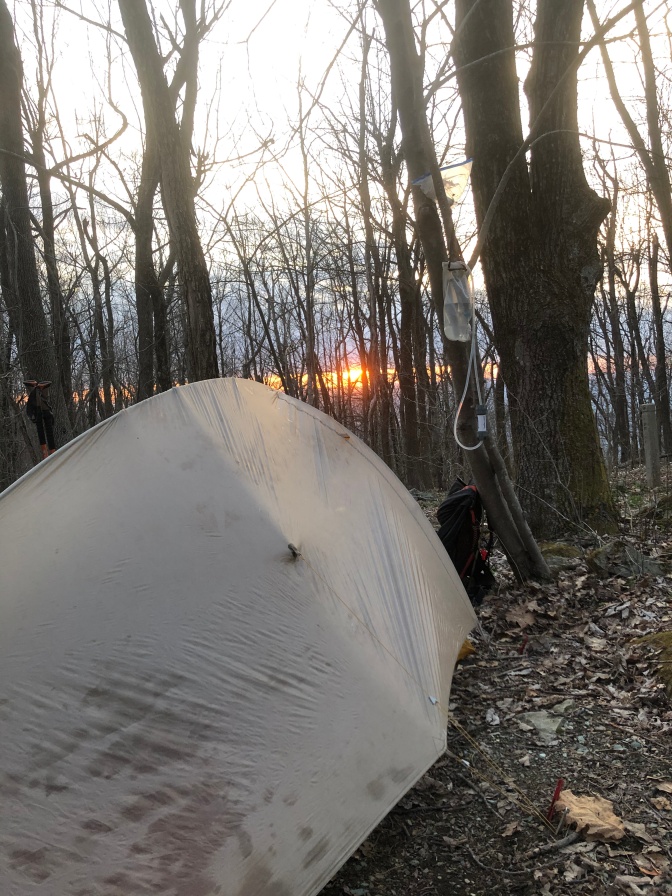 I haven’t been able to say this often but the night was comfortable. When I arrived at the shelter it was packed. A combination of flip-flop hikers from Harpers Ferry and NOBO hikers and section hikers had all landed at one spot at the same time. I found a lone site to set up well away from the shelter.

As early as it is in this attempt to hike the entire trail I’ve already been reacquainted with the difficulties of what it takes to accomplish it. There is very little of the effort that isn’t anything but hard yet the end of each day provides the knowledge that you’re a few miles further, you’ve met a few more great people, and physically you feel just a little bit stronger. After subtracting the bad from the good I’m normally left with a net good and that is why I’m able to “hike on”.