Goldie and I slept soundly in the old church. Before falling asleep I laid on my back and could see where something had once protruded through the center of the roof. I got up and projected the spot in the ceiling to the floor. Sure enough there was a large square imprint on the floor where a wood heater once stood. I could imagine a congregation gathered in the old building on wintry Sunday mornings. Each pew with a family in their own normal pew. “I believe in God, the Father almighty, creator of heaven and earth……a couple of hymns, the days sermon and after the benediction each person filing out shaking the hand of the pastor who that day may or may not have struck a chord with the inner being of each parishioner. They were all gone now and the reverend location shared by so many was now being occupied by two unkempt ice cream eating hikers named Goldie and Defib. I hope He’s not offended. Mongo brought me back to the trail as Goldie stayed behind to decide if he was going to continue this journey. Like that congregation it was time to move to the next chapter.

There was Something Still Holy There

At 1025 I came across tortoise number three. The tortoise-hare race was becoming a run away with the former ahead three to one. Maybe there was hope for me yet out here. Delays and the need to defibrillate the hike had existed but my shell was intact and in spite of ducking my head back into my shell a couple of times I was still plodding along one inch at a time.

Gunshots to my Left…Dogs Barking To My Right

I called my cousin Kathy Rooney Humes up in New York to see what she was up to. As we talked and I walked the ridge I could hear gunshots in the valley to my left and dogs barking in the valley to my right. I was descending into a gap between the continuous mountain chain. Kathy and I have remained close since our youth living one stone wall apart. Besides…. she had a swing set next to a big rock in her front yard to play on. Strangely that rock kept shrinking each year. By the time we graduated from high school it was only a shadow of its former majestic self. 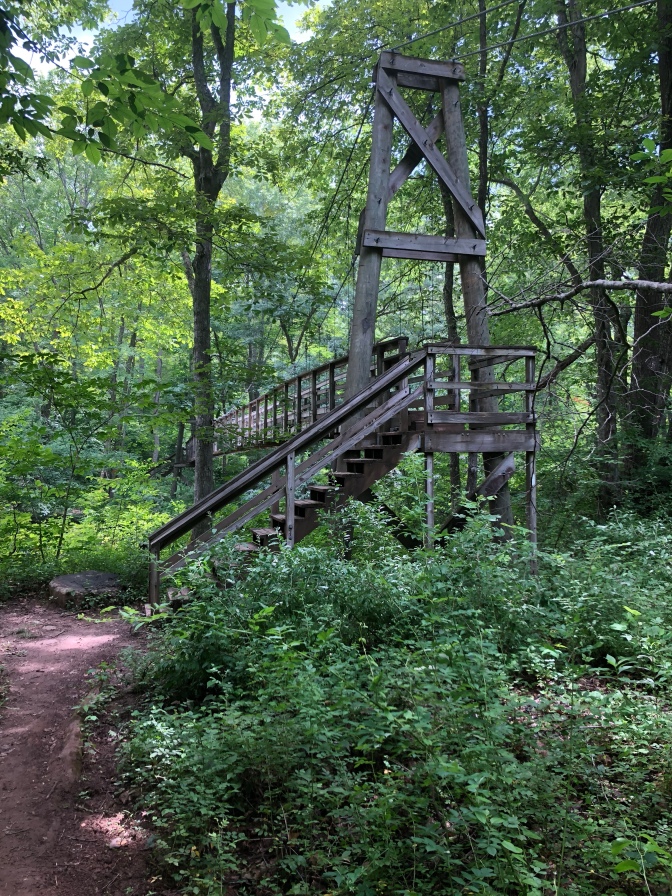 At 5.2 miles I descended to Kimberling Creek on Virginia Road 606. A large suspension bridge had been erected specifically for AT hikers like me. I steadied my legs and wobbled across the swaying-bouncing structure. I was still missing the burger lost situation of several days before and the word was out that there were burgers at Trent’s Grocery just half a mile down the road. I stopped….I pondered….I hiked down the road. Arrival there was much the same as in all small country stores in the South. Many people in and out of the only game in the area, many total strangers, and all talking to one another like we’d known each other all of our lives. I ordered a chicken salad sandwich.

The Welcome Committee at Trent’s Store

When the time came I didn’t want the burger. The thought of grease came back into my mind. I bought an ice cream and went back outside and sat down. The welcoming Rottweiler and I discussed the state of affairs in the world. We became so close that everyone who walked by said, “I like your dog.” Maybe they were afraid of offending him.

In a few moments a young couple arrived hiking NOBO. They were doing three days and it was obvious that they were made for each other. They finished each other’s sentences then laughed together. She loved to hike in the rain and he attended to her every need. He bought her lunch and while we were all eating the rain once again poured down. They laughed! I thought of wet feet.

I Love These Critters

I nearly stepped on this beauty. I wanted him to stay in the trail so that the happy couple behind me could see him. Sadly the snake wanted nothing to do with that. He slithered away.

Young Buck Checks Me Out

At 4:45I came upon a young buck. He ran about 100 feet and then stopped to check me out. We looked at each other for awhile. In the end we didn’t have much to say to one another and we each went our own way. I’ve seen that in restaurants….. couples sitting together and not saying a word. After all of the things that they had done to make them a couple…. they no longer could find anything to say to one another after “pass the salt and pepper” was disposed of.

I entered Wapiti Shelter area. Gatsby, Flossie, Jed, and Captain were there. A little later the happy couple arrived still smiling. We learned that they were Sean and Ally of Raleigh, North Carolina. They were newly engaged to be married and were getting dirty together. I told them that the Mt Leconte Lodge in the Smokies was designed for them. Just hike up Alum Cave Trail and take a left. A perfect place to create memories. I walked to my tent…. I crawled in… in the darkness I could hear laughter with each sentence nearby. I remember those days….